This is the first photoshoot I have ever done by myself in a semi-public place. It was on a country road (I live in the country… ish…) in front of the doors of a community building, so people were driving by every once in a while (staring), and I drove by three times before I convinced myself I was brave enough to stop and take pictures there.

But I did. I set up the camera, got the focus in place, and started snapping. Quite a few people slowed down as they drove by, and one lady, who lived on the driveway near this building, stared at me the entire time she walked out to get her mail, but the only person who actually approached me was quite nice. And maybe a little talkative.

He parked his truck next to the building and walked over as I was thinking “Please don’t be coming to talk, please don’t ask what I’m doing, please don’t kick me off the property…” and asked “Are you a photographer?”

I sort of shrugged and said I was working on it. Very smoothly (sarcasm. It was awkward) I said “Sorta. I have a blog…”

“Oh,” he said, digging in his wallet, and I had an aside thought that maybe he was going to pull a badge and say I needed a permit to be photographing on the land. Instead, he pulled out a little card with a flower, name, and photographer’s website on it, and said “Because I have this friend who is a photographer and he goes to this photographer… club, thing, y’know, where they all kind of teach each other. He does photoshoots, I dunno if you’re into that sort of thing but you could contact him if you want, he’s always looking for models…”

And he went on to tell me all of the things he didn’t actually know about photography (“you know, I don’t know anything about it but what my friend tells me”) and about the iPhone pictures he’s blown up in his office and the issues his friend was having with getting a high-resolution photograph printed, and all of the things that they did at the photography club (and they have professional photographers there– not your average joe who says “I do weddings”, you know, these guys have their pictures printed in magazines.”) for about fifteen minutes while I got cold and smiled and nodded and hoped he would stop so I could finish up the shoot and go home.

It was really quite entertaining. But it made me realize something: despite all the stares I got from passersby, and despite getting approached by a complete stranger because I had a camera and a tripod… taking pictures in public places isn’t as scary as you might think if you’re used to photographing in completely secluded, no-chance-of-meeting-other-humans locations.

As you might be able to tell by the ridiculous amoutbn of pictures, this is definitely my favorite Valentine’s day look. It’s not the one I’ll be wearing for the 14th– I’ve decided on the bombshell look (that you haven’t seen yet) because Mr. Owl loves that one the best. This vintage dress is one of my favorites, but I don’t wear it often becuase it’s white, it’s got a stain on the chest, and the collar itches terribly. Still, I wore it for most of the day until Mr. Owl got home and giggled at me for wearing all white.

I can’t wait to style up and shoot the other two looks. Now that I’ve jumped the hurdle of the first public photoshoot, I’m planning to scout out some locations downtown by some colorful walls I know, and hopefully any encounters I have will be as nice as this one was. 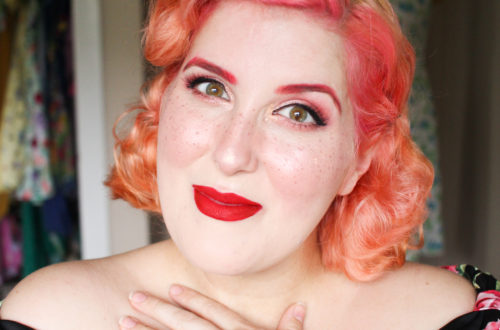 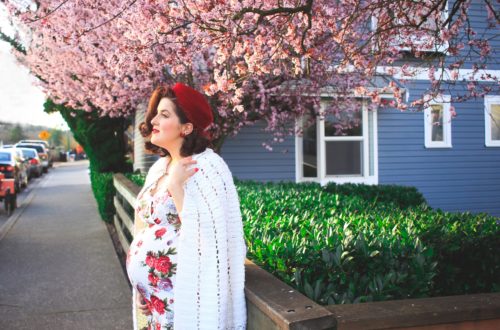