Let me just put this out there right now: the following facts might be TMI if you are detail-sensitive or a man (especially a related-to-me one). So I apologize. But I wanted to write about a few things for my fellow first-time pregnant women who might have discovered weird things about their bodies during pregnancy, are too shy to ask around, and don’t want to resort to Google for answers.

Because while pregnancy is an amazing thing, it is probably the weirdest change to ever come over your body.

For one, nobody tells you that your chest might start leaking before you even have the baby. So when you’re 5-6 moths pregnant and suddenly realize your boobs are emitting fluids, obviously… you might freak out. Or your husband might freak out, anyway. If you’re like me, you might be sort of fascinated with the fact that your body is getting ready to sustain the life of a brand-new human being. But you still might not be sure what exactly is going on.

Not to worry, though! It’s not a sudden disease or random infection! What you are leaking is called colostrum. It’s a form of milk that is lower in fat and higher in protein than regular breastmilk, and contains high antibodies to protect your baby from infection. He or she will need and eat mainly this in those first few days of being new to the world, and it’s totally okay if you see it prematurely.

So invest in some nursing pads. Your bras will thank you for it. And while you’re at it, get a few pantyliners as well. And keep clean pillowcases handy. Your body is probably going to become one huge leak-fest of drool, discharge, and life-sustaining fluids.

On a related note, nobody really mentions that not only will you have frequent urgent needs to pee, you also both won’t be able to hold anything else for very long either, and won’t have a regular bowel movement for days. So if you’re not stopped up, you’re desperate for the porcelain throne. And that’s normal.

But why did nobody in my acquaintances know that insomnia is perfectly normal when you’re not even two months pregnant? Apparently all those naps throw off your sleep cycle, and from then on you’re just cursed. Tip from the girl who went through it: do your best to stay awake all day no matter what, because you might not be able to snooze at night if you give in to the daytime sleepies.

And if you just can’t keep your eyes open during the day, Unisom is a great pregnancy-safe, non-addictive way to get your body to relax at night.

Plus, you get cravings for things that will completely and totally make you regret it later. Your body will shout “I need tomatoes!” but the baby has pushed up your stomach cavity just enough that any addition to natural acid is just heartburn waiting to happen. By five months, you probably won’t be able to take onions, garlic, acidic fruits, or certain spicy seasonings without a good dose of starch. Or a few Tums.

And according to my sisters-in-law, it is totally normal to crave inedible things. Like dirt. Or new fabric.

And you might not gain weight for a very long time. Your husband might worry about this, and so will your mom. You might, too. Or you might be thankful that your body doesn’t seem to be packing on the pounds. Whatever you do, don’t worry. Unless you never, ever gain weight, it’s pretty common and completely healthy for us first-timers to stay a steady weight for a few months despite gaining inches and inches of boob and belly (which means we’re actually losing weight and gaining baby), and then start a real gain when we hit 5-6 months pregnant.

Don’t use that as an excuse to pig out, though! Because when you do get to the weight gain stage, you might not be able to quit the eat-whatever habit, and you’ll probably regret having put on more than your body needed to sustain the baby.*

*Pregnancy weight gain is healthy, but even pregnant women can gain an unhealthy amount of weight.

You might not show much, you might lose hair, you might break out in zits; those are all completely normal things. Yet, despite all of these weird (and sometimes downright torturous) symptoms, you’ll hit the honeymoon phase and start to think that pregnancy is the best thing ever (unless you’re one of the unfortunate few who stays sick the entire time. I’m so sorry if you are!)

It’s the best because:

1. The baby kicks. All the time. It feels like a twitchy muscle, but in a wonderful way because you know it’s your child responding to whatever (fruit, sugar, noise, your voice), and eventually he or she will kick so hard it’ll move your hand when you go to feel it. And eventually you’ll be able to actually see it. And get a wee bit creeped out.

2. You might get really good skin. My skin has cleared up so much since I got pregnant. For the first time in ages, someone told me I looked “glowy” instead of “tired” when I wasn’t wearing a speck of makeup.

3. You get a newfound confidence. As evidenced in many of my pregnant style posts, I feel less self-conscious about my body because… well, gaining an adorable baby bump just does that, I guess. (Haha!)

4. You can laugh at most of the weird things. You can tell your husband you now have superpowers (he can’t produce food from HIS chestal region, so there!). You can know that you’re being ridiculous when you’re really emotional. You can blame weird cravings on the baby. You can use the excuse “the baby needs it!” when all you want is chocolate.

6. You get a freaking BABY out of it. What more could a girl wish for than a cute, chubby cheeked, wide-eyed little munchkin to have all for her own?

So what about you? What weird, hilarious, or unpleasant symptoms did you go through that nobody warned you about? What wonderful things are you experiencing because of your pregnancy? Add to the list in the comments!

How to style maternity for winter 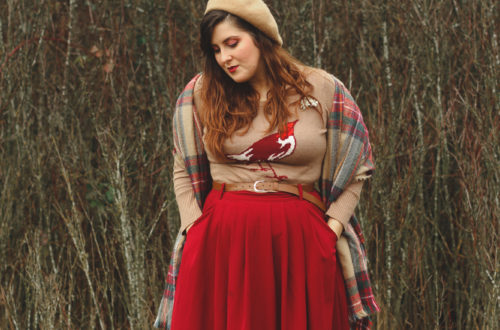