Heads up! Orchard Corsets sent me a corset as a gift, but all opinions are my very own. 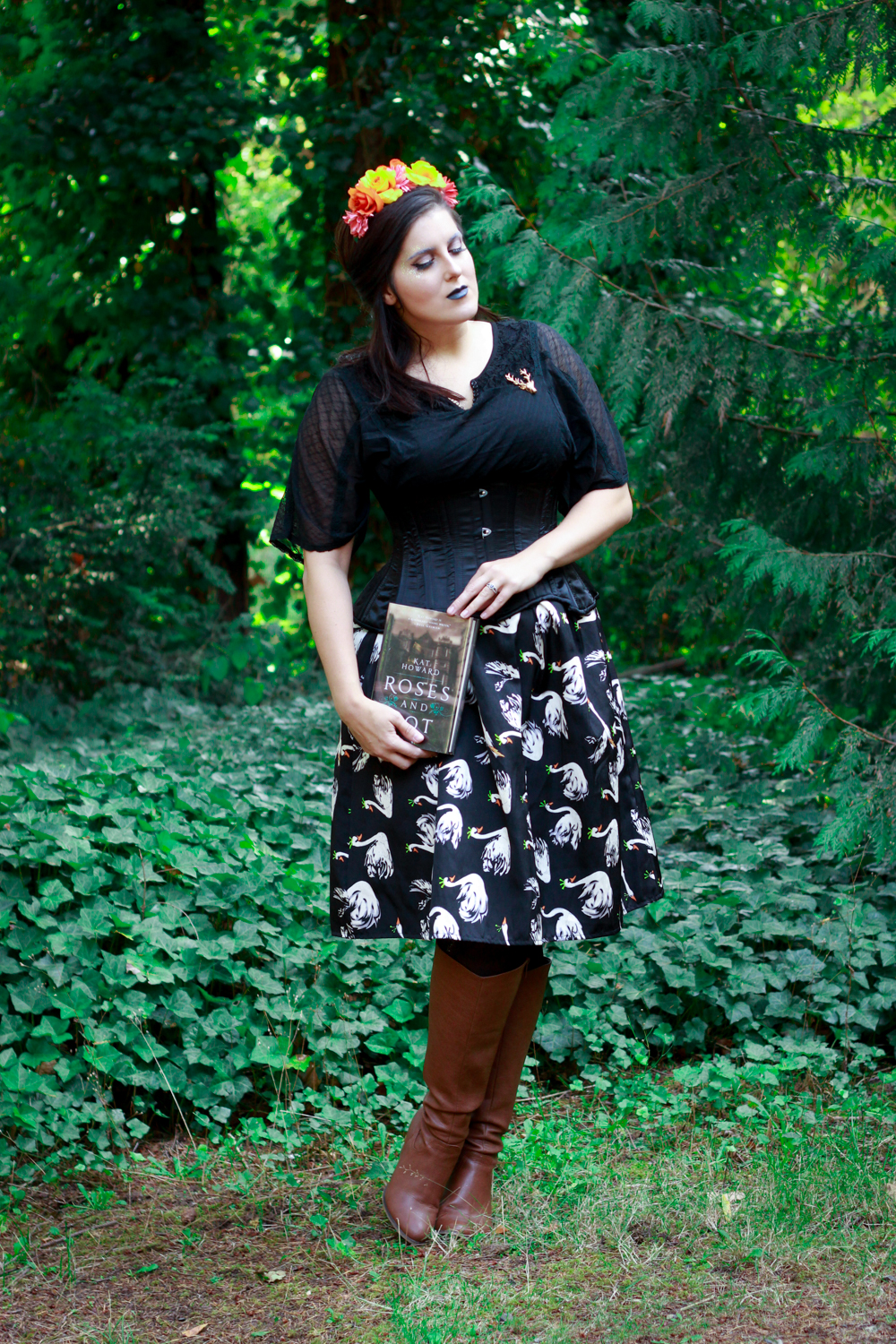 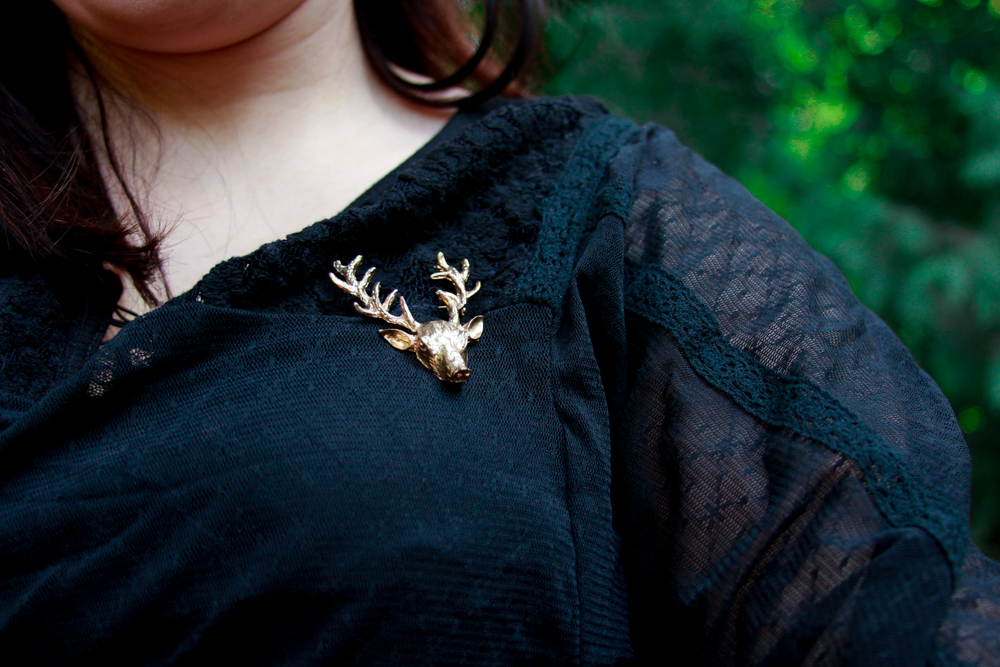 It’s time for another book review! I haven’t done a non-BBRBF book  club review in quite a while because… time gets away from me. But Roses and Rot, by Kat Howard, was so incredible that I read it every moment I could and when it came to the end, I could not put it down!

As always, the summary:

“Imogen and her sister Marin have escaped their cruel mother to attend a prestigious artists’ retreat, but soon learn that living in a fairy tale requires sacrifices, be it art or love.

What would you sacrifice in the name of success? How much does an artist need to give up to create great art?

Imogen has grown up reading fairy tales about mothers who die and make way for cruel stepmothers. As a child, she used to lie in bed wishing that her life would become one of these tragic fairy tales because she couldn’t imagine how a stepmother could be worse than her mother now. As adults, Imogen and her sister Marin are accepted to an elite post-grad arts program—Imogen as a writer and Marin as a dancer. Soon enough, though, they realize that there’s more to the school than meets the eye. Imogen might be living in the fairy tale she’s dreamed about as a child, but it’s one that will pit her against Marin if she decides to escape her past to find her heart’s desire.” 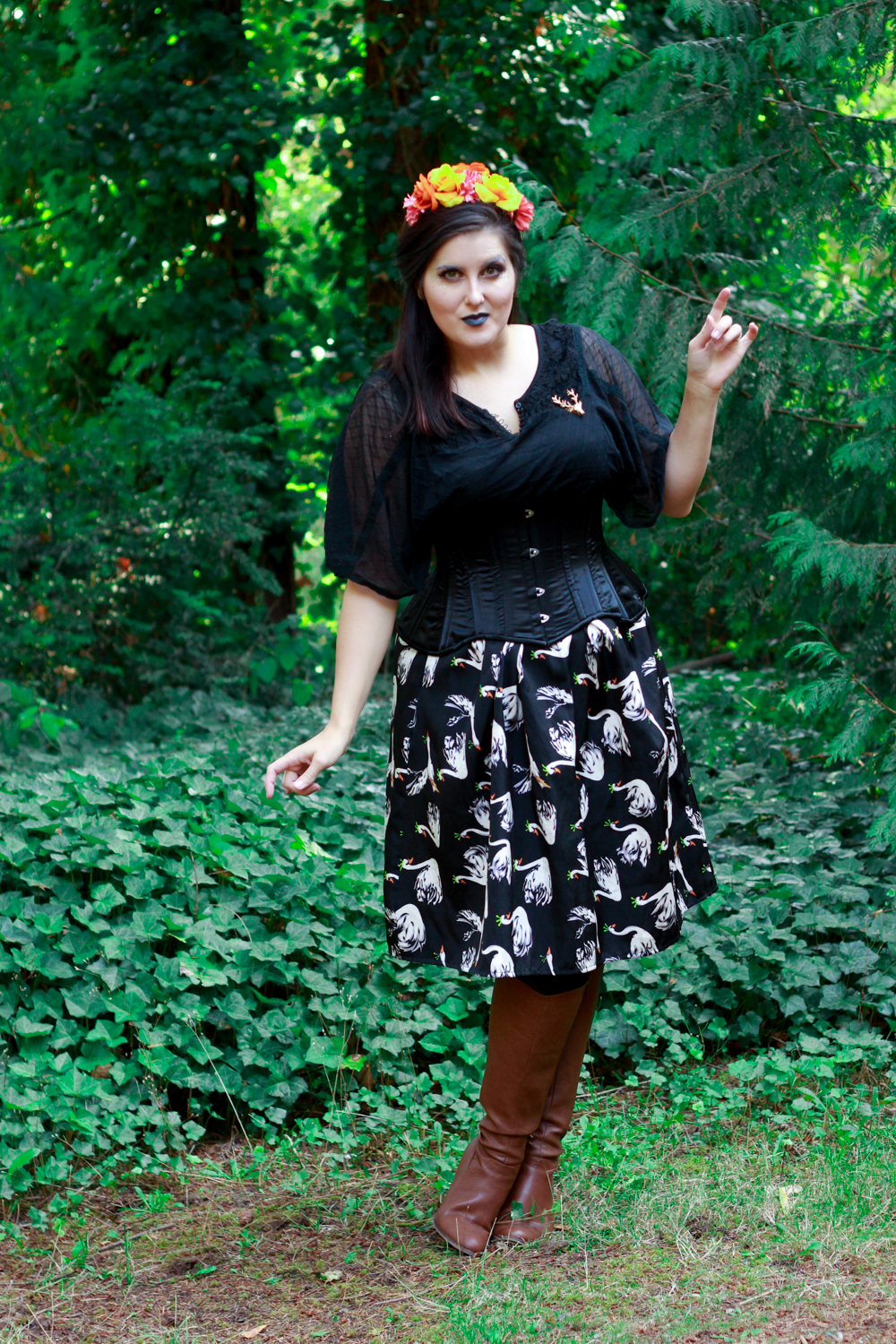 This is Kat Howard’s debut novel.

When I picked it up, I knew this was her debut, and I wasn’t expecting it to be that amazing. But I was blown away. Imogen and her sister Marin escape an abusive mother to go to a school for extremely talented artists. Marin’s talent is dancing. Imogen writes fairy-tales. Throughout their childhood, Marin was the favorite child, and their mother did everything in her power to destroy Imogen’s confidence and skills, even going so far as to burn her dominant hand so badly she had to teach herself to write with her other hand. She was, in a word, horrific.

Thus, Imogen dreams of escaping into a fairy-tale, where everything ends happily ever after and everyone has a chance to escape the evil villains. Little does she know that Melete holds a secret far closer to her dreams than she could ever have imagined, but it’s a dark secret and one that threatens to tear her relationship with her sister apart. 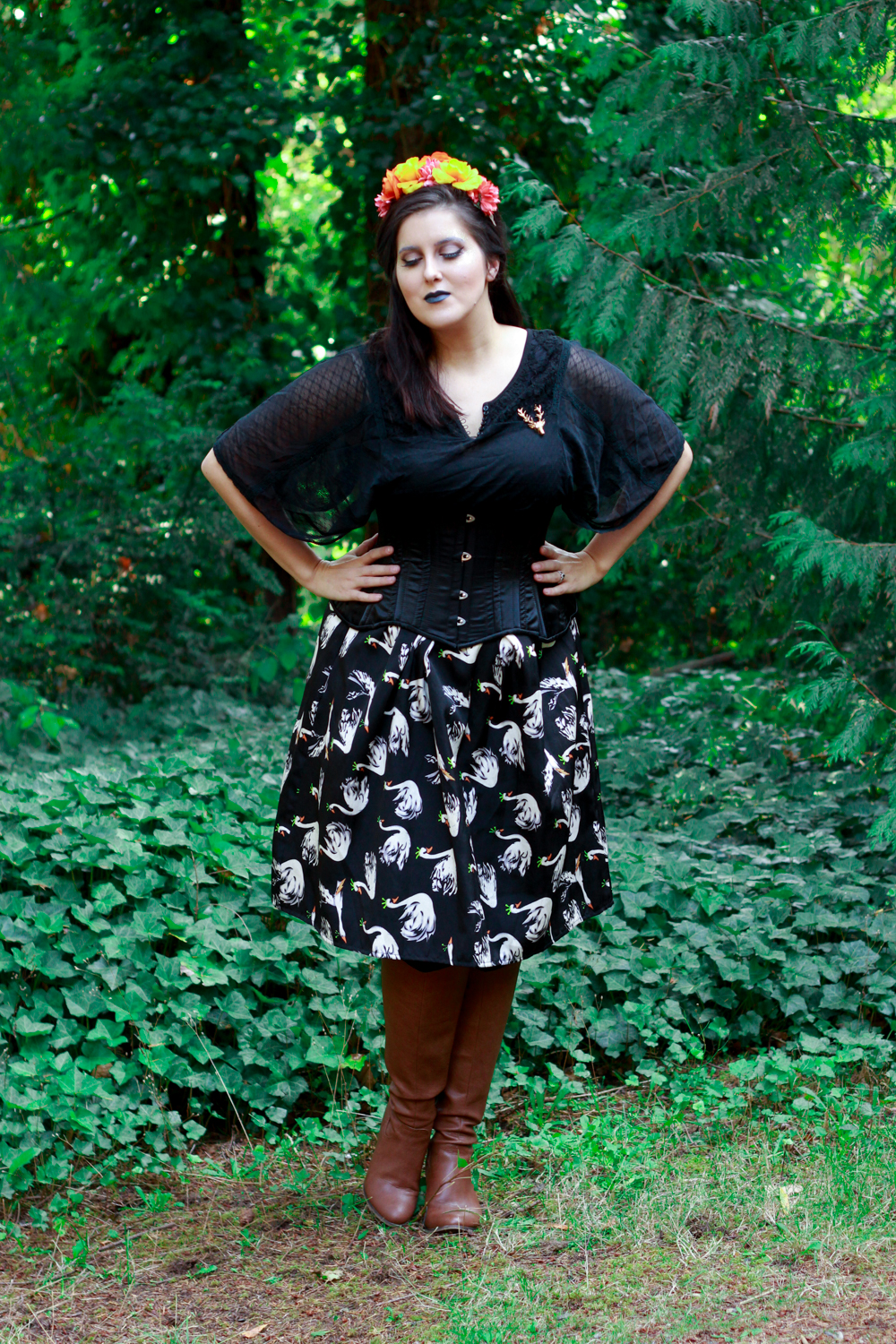 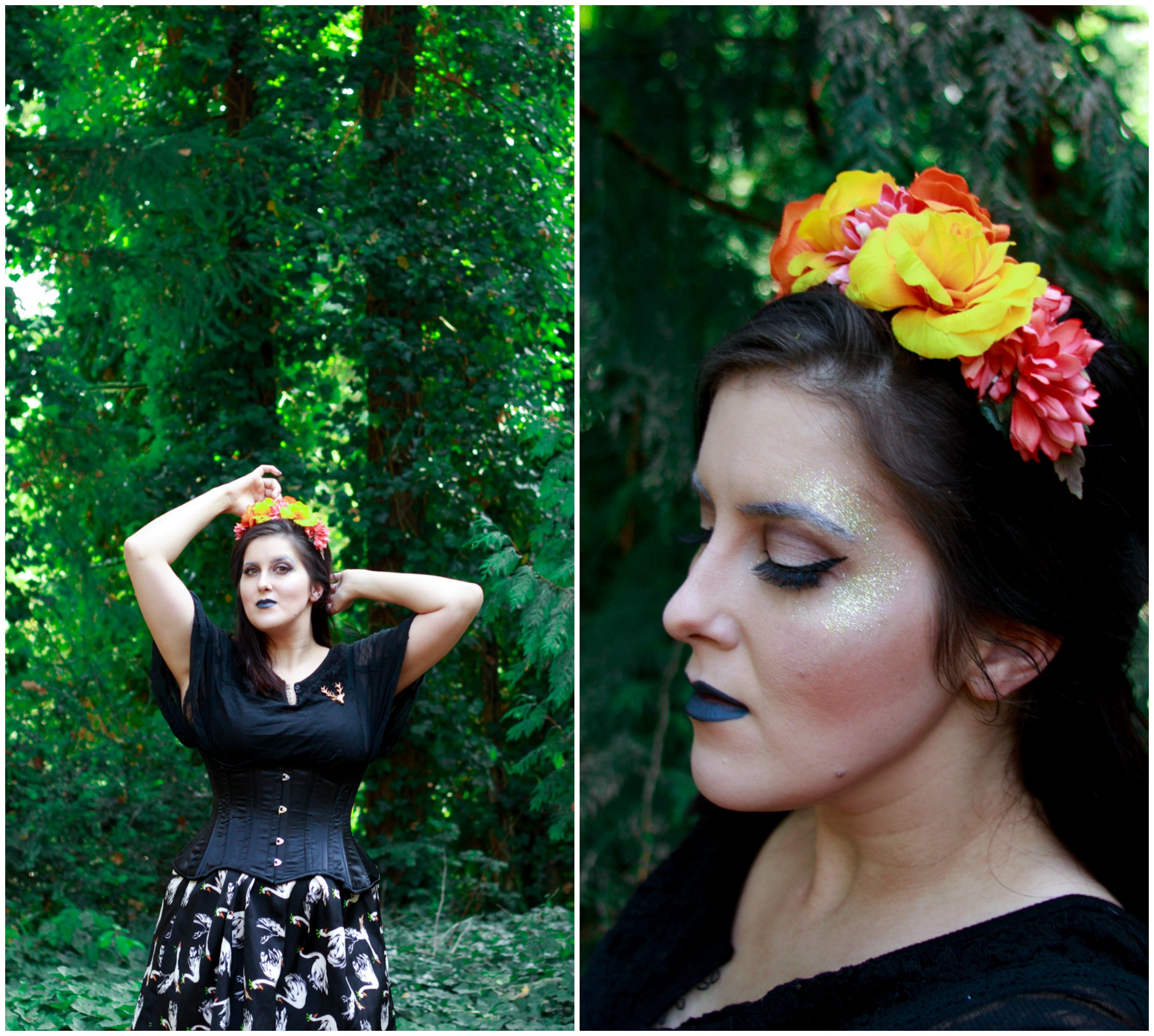 I can’t even find the words to tell you how much I adored this book, and how riveted I was. I stayed up until nearly midnight finishing the last chapters, because I could not put it down. It was just the sort of dark, romantic, Gothic novel I adore, with that hint of fairy-tale that becomes full blown toward the end. It’s the type of novel that inspires me to write. It’s the type of novel I wish I could write. 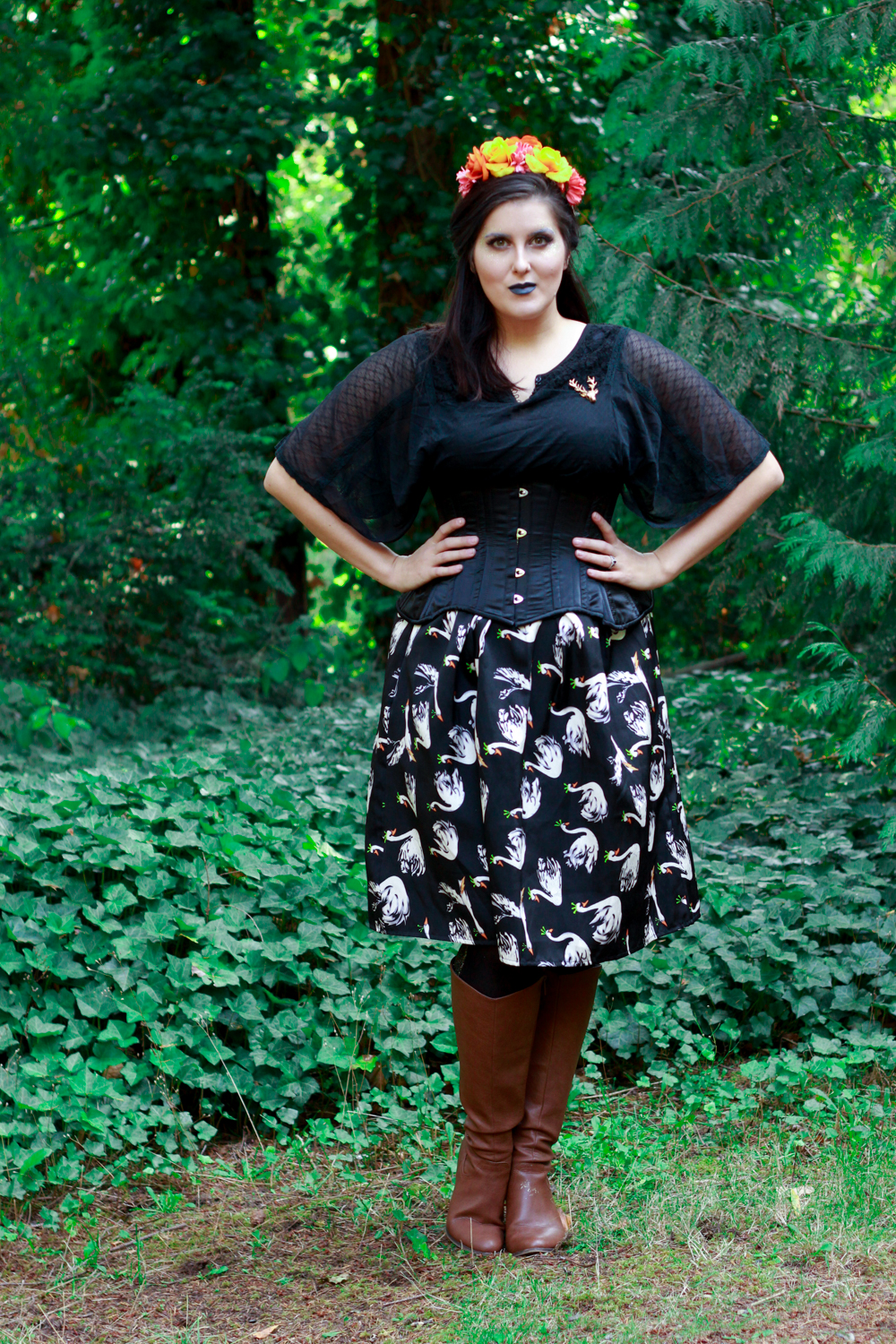 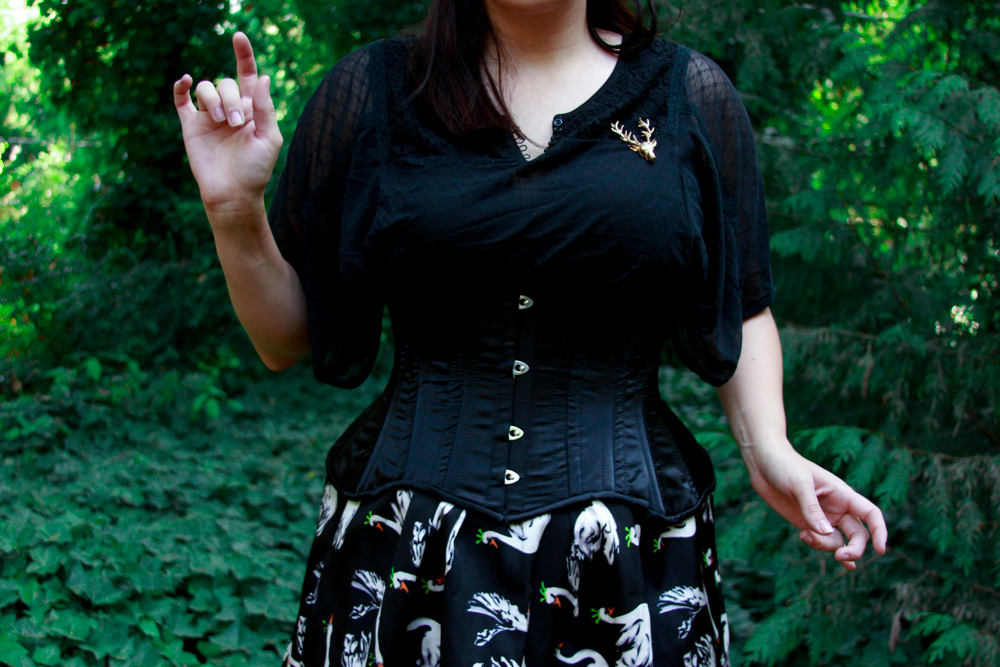 Now on to the outfit

A few weeks ago, Orchard Corsets reached out to me to ask if I would be interested in a collaboration. I had just started researching waist-training corsets, and through a few emails Amber helped me choose the best corset for what I want — something I could wear over or under clothes, that will help me waist train and also fit my body shape best. 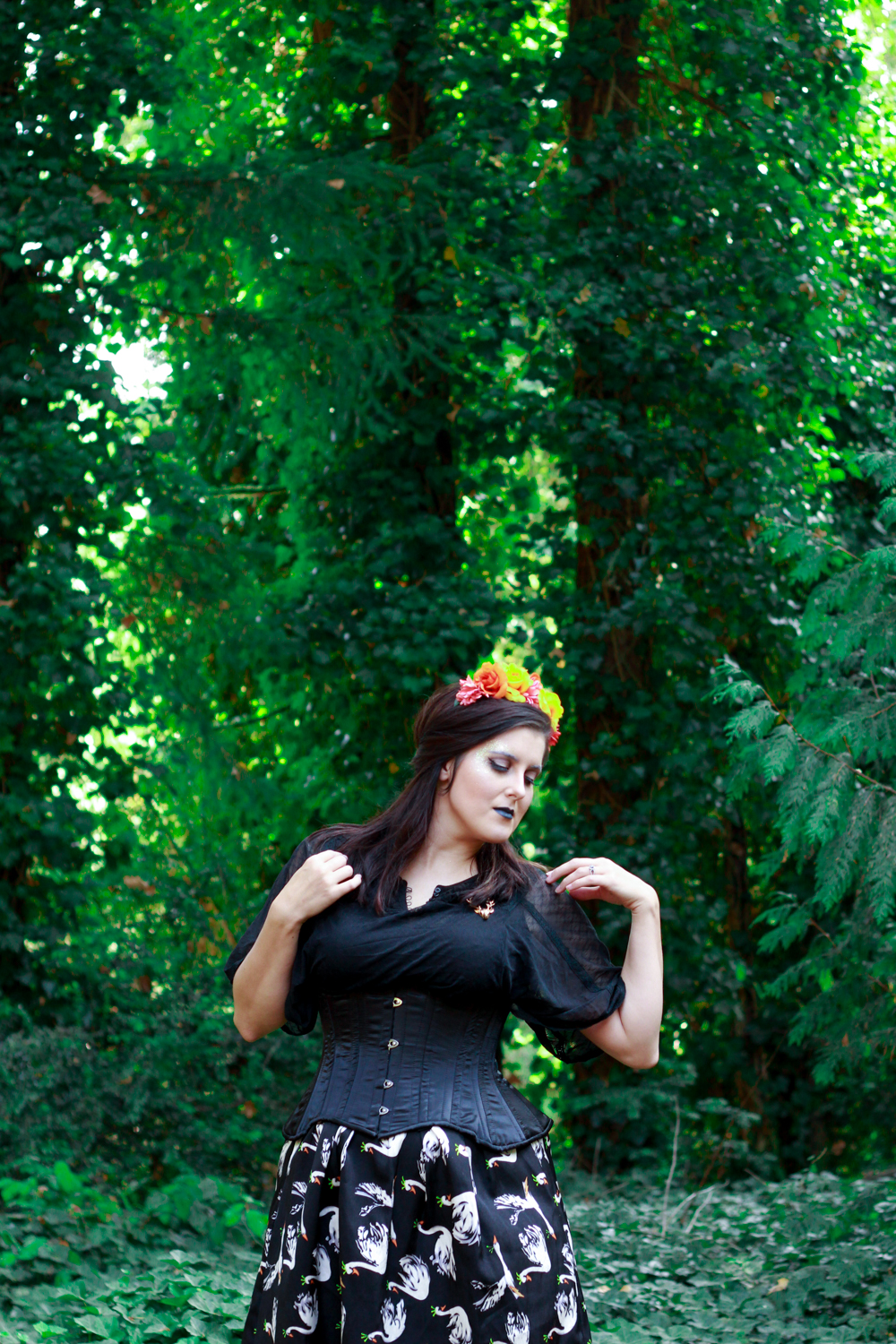 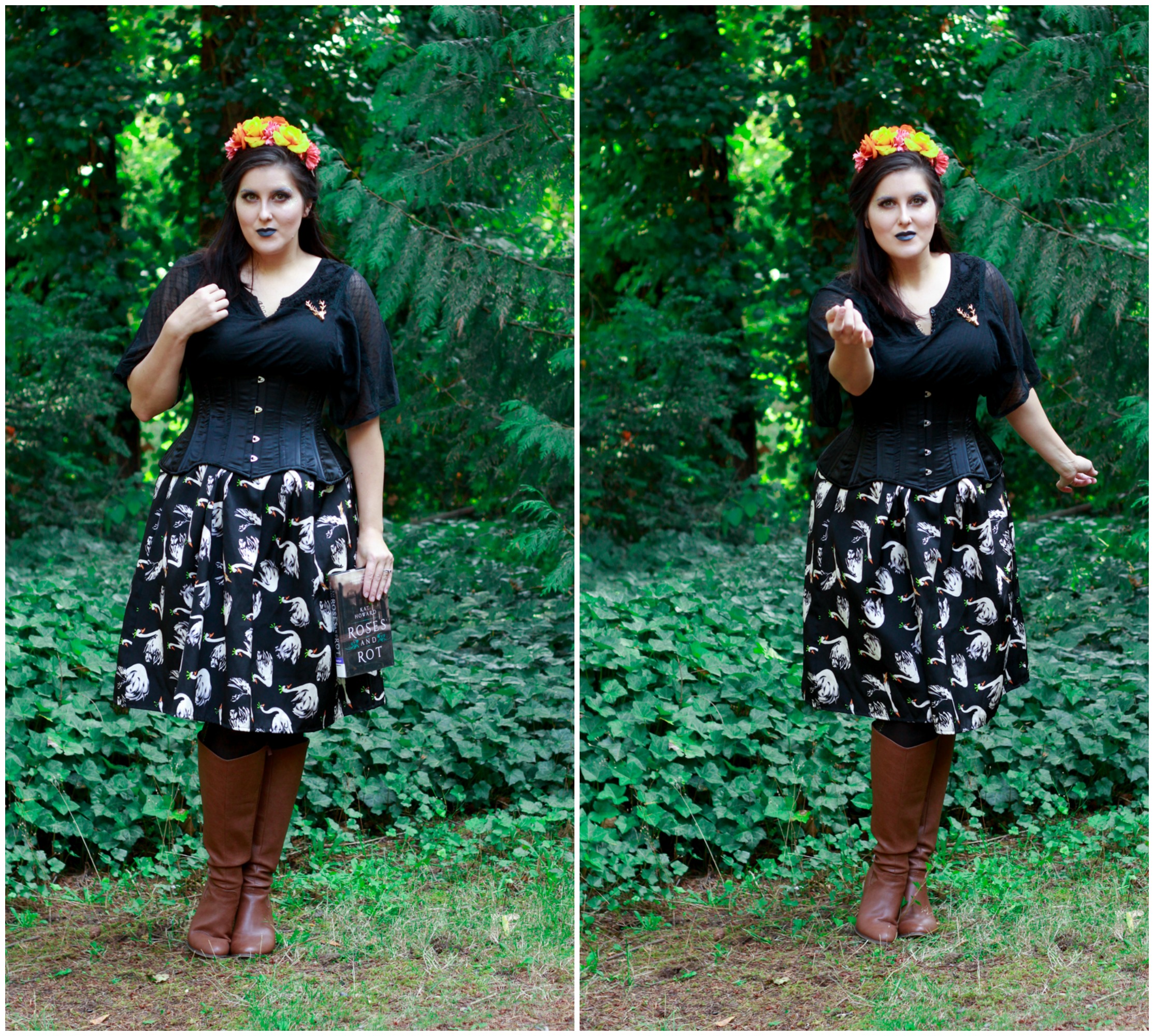 I knew I wanted to debut this corset in a special way. After finishing Roses and Rot, I knew this post would be perfect. I wanted to emulate a little bit of Faerie in my outfit, with some glitter and pale brows and dark lips, and a deer’s head brooch for Gavin — the king of the fairies who has horns in Fae — and a swan skirt for another faerie mentioned who is part bird. The corset really helps push the outfit even more into fairy-tale land.

While I haven’t gotten this corset entirely seasoned to my body, and realized after taking these photos that I hadn’t gotten it properly laced in the back, I love the way it feels already and I am excited to get it to the point where I can wear it daily! 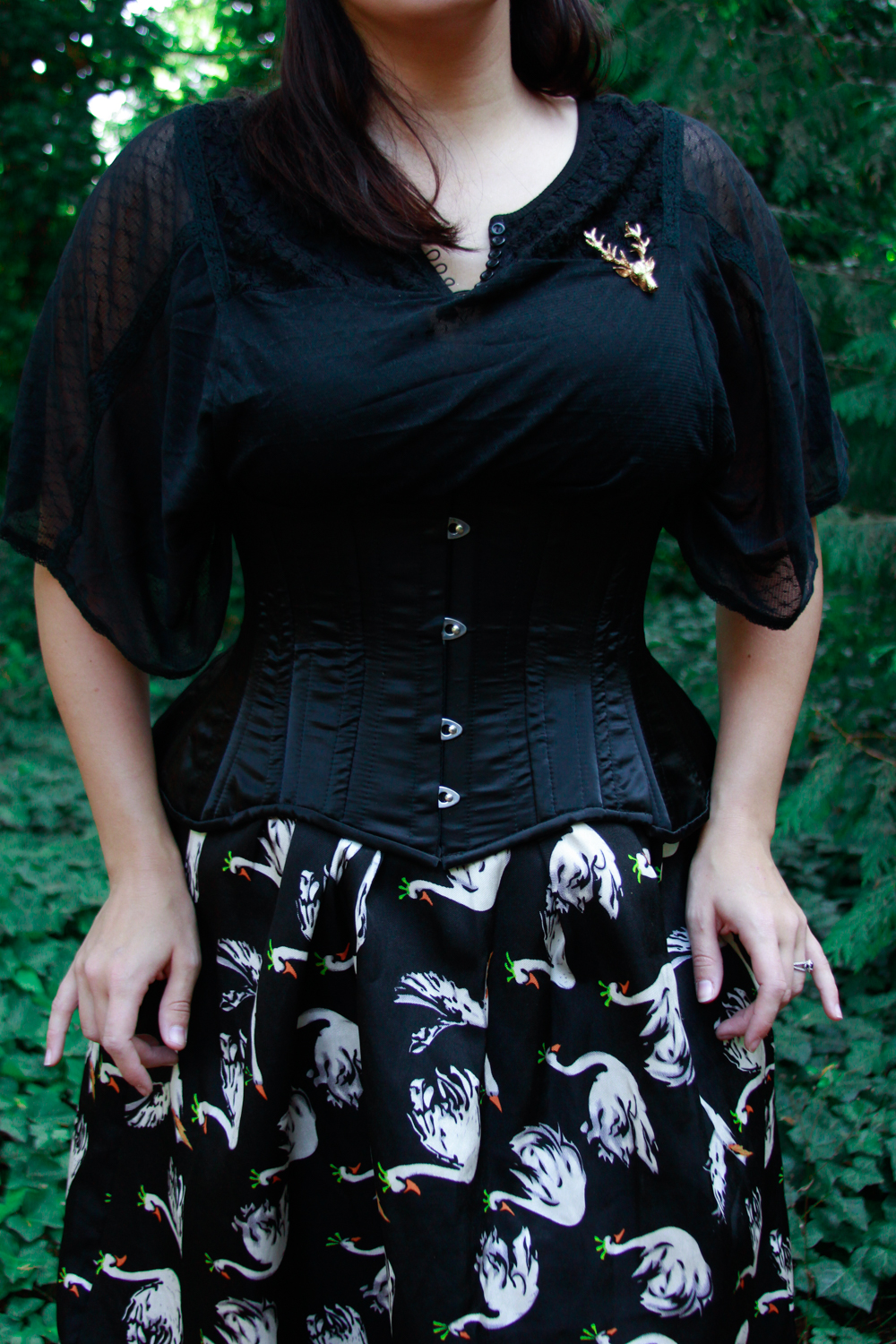 If you are new to corseting, I would definitely recommend Orchard Corsets!

Amber’s help was essential in getting me properly fitted; I sent her my measurements, and she recommended a few that would work best on me. We eventually settled on this satin 426 short as I have a shorter torso, and satin looks best under clothes. If you want to know more about fitting a corset and what to choose, definitely check out their links on which style to buy!

And this page on Corsets 101 has all the information you could ever need. 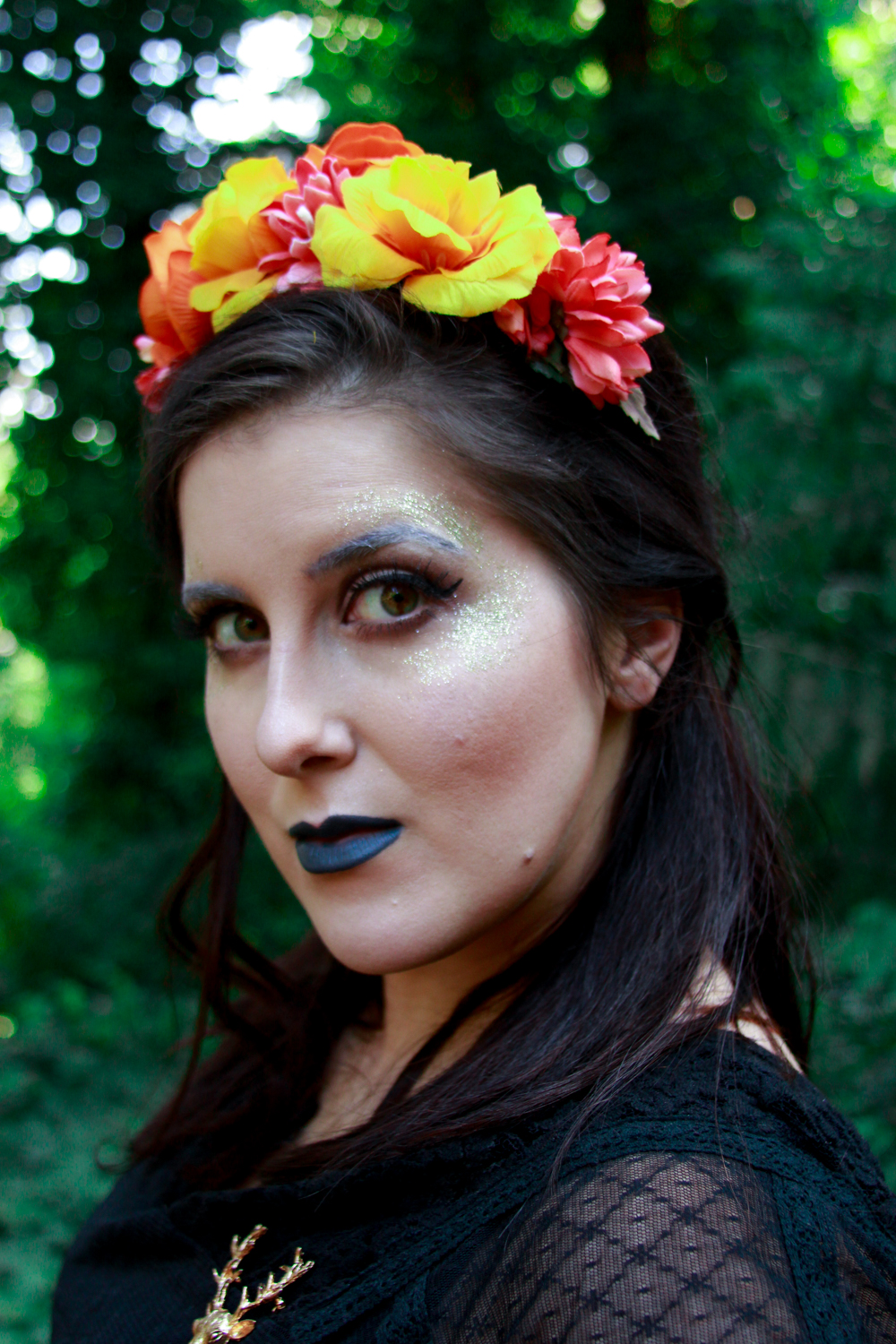 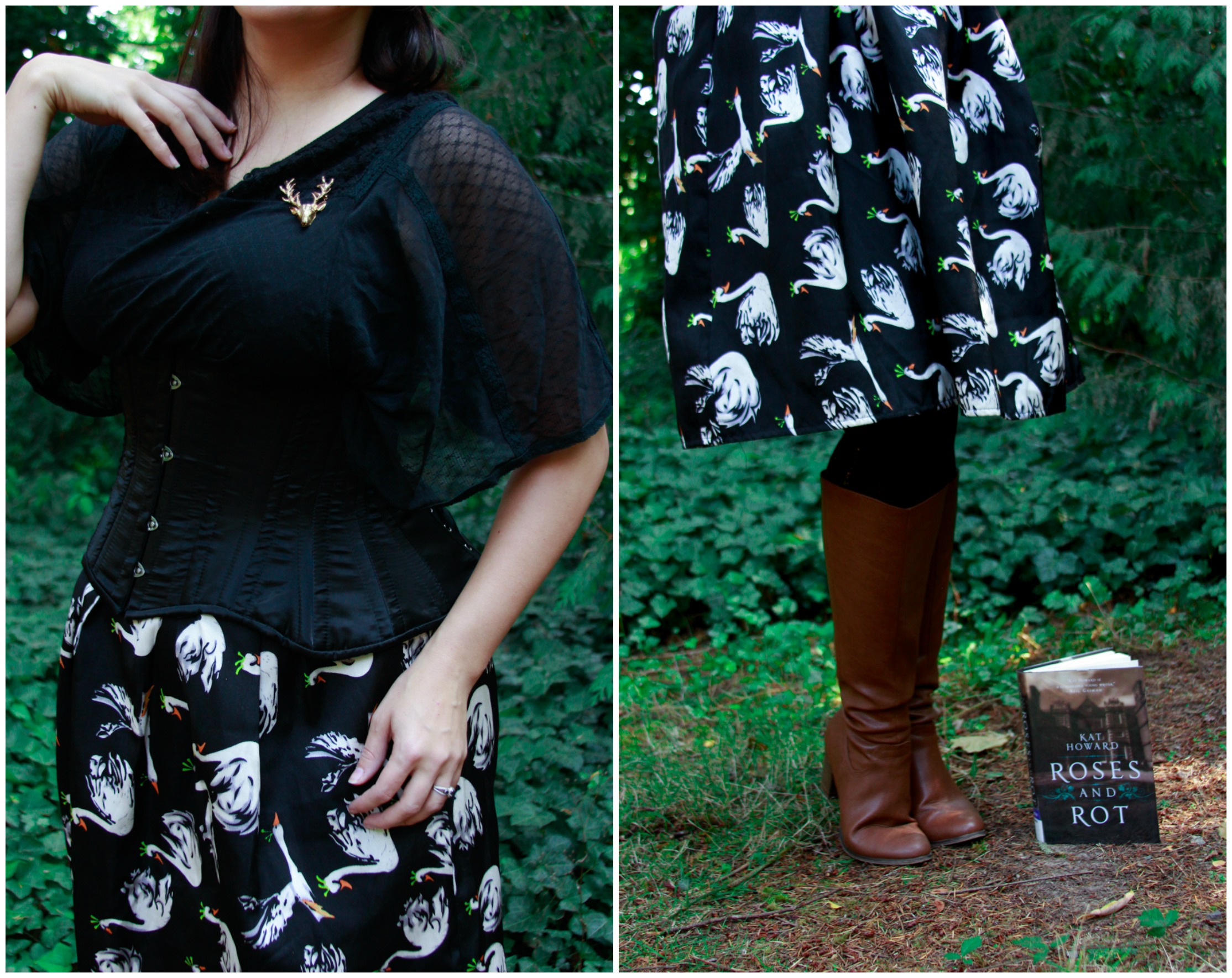 In short, this post is full of two really awesome things

A beautiful corset from Orchard Corsets, and one of my new favorite books by Kat Howard. I look forward to aquiring more corsets (this plaid one!) and reading more of Kat’s books whenever she publishes more! 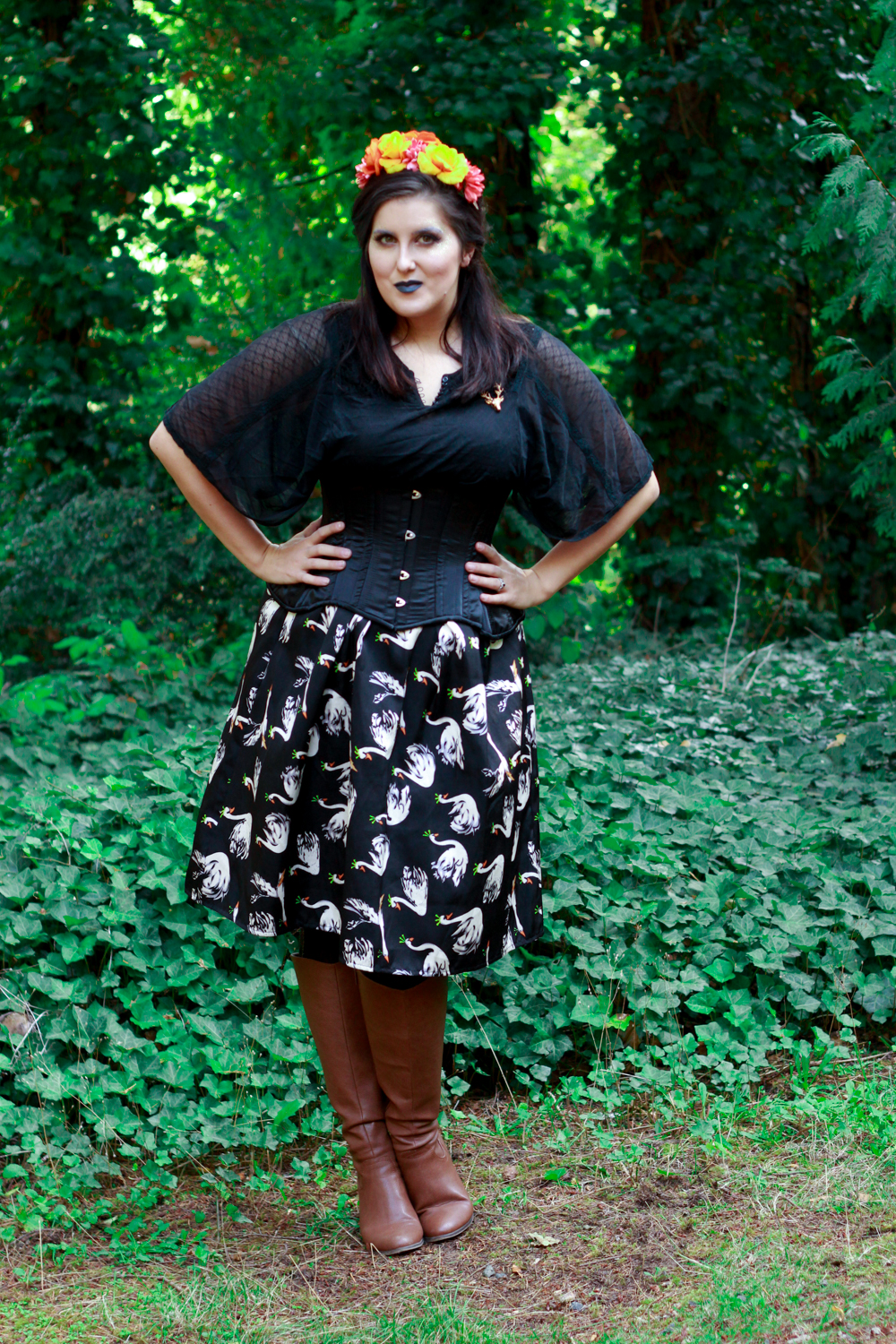