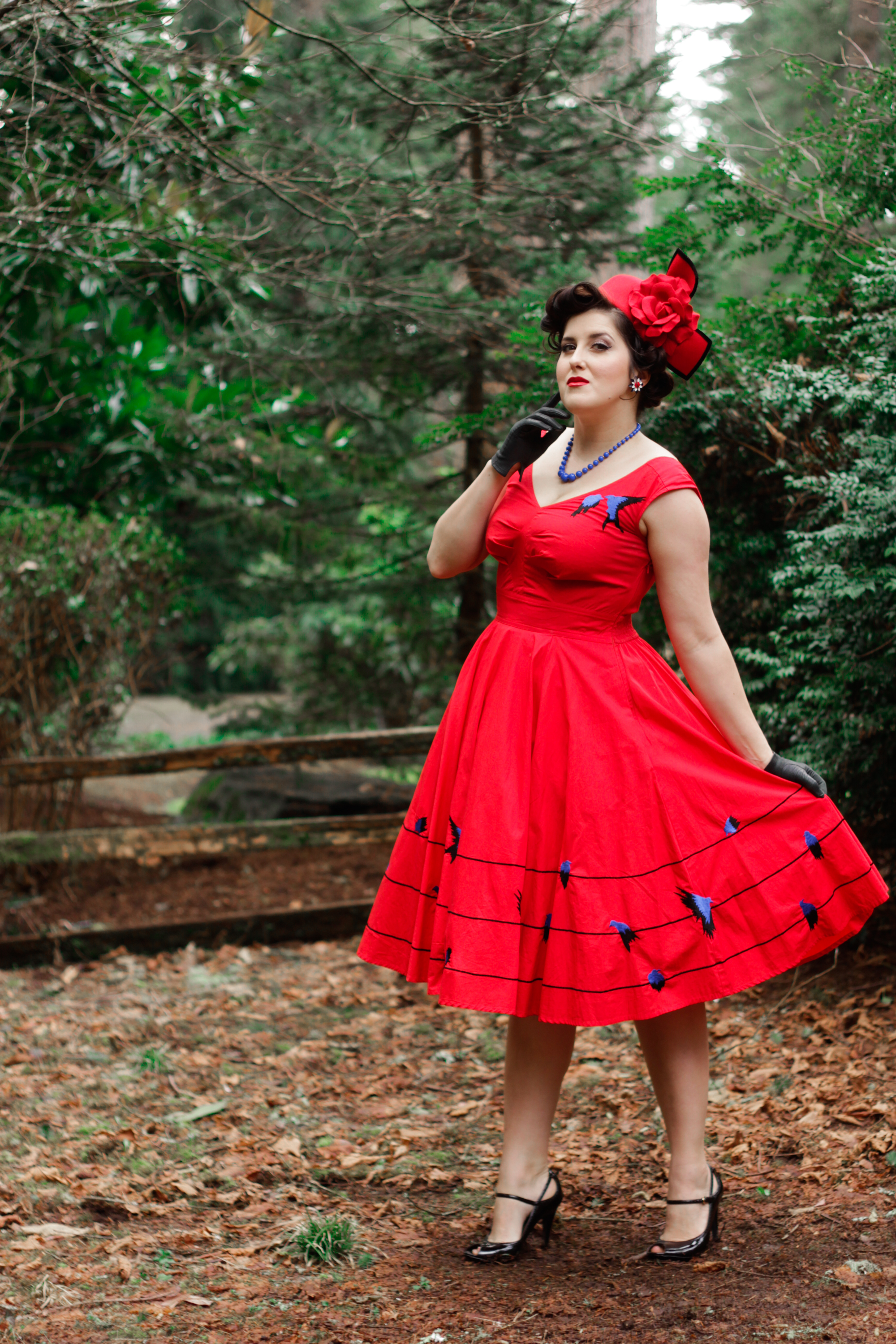 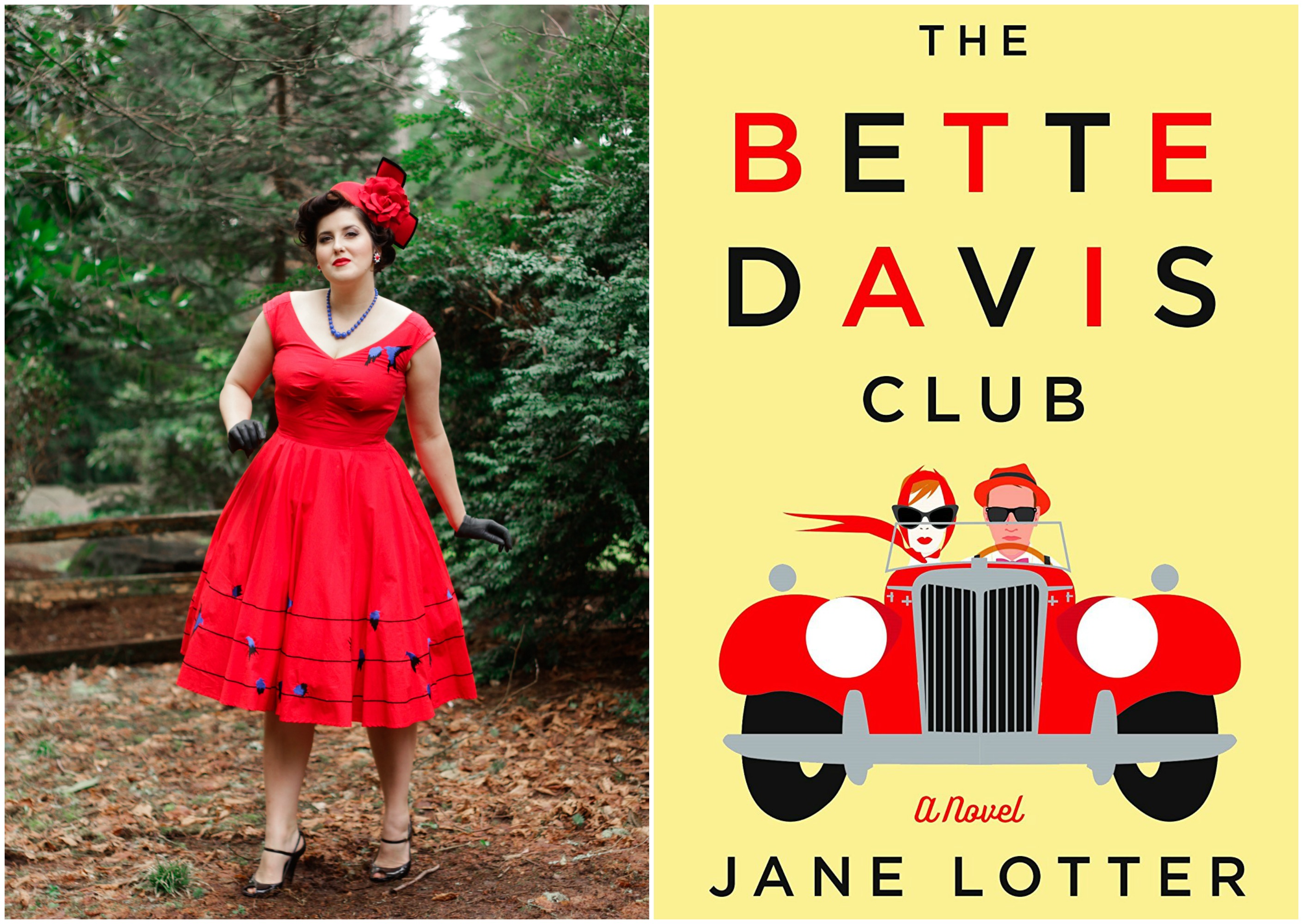 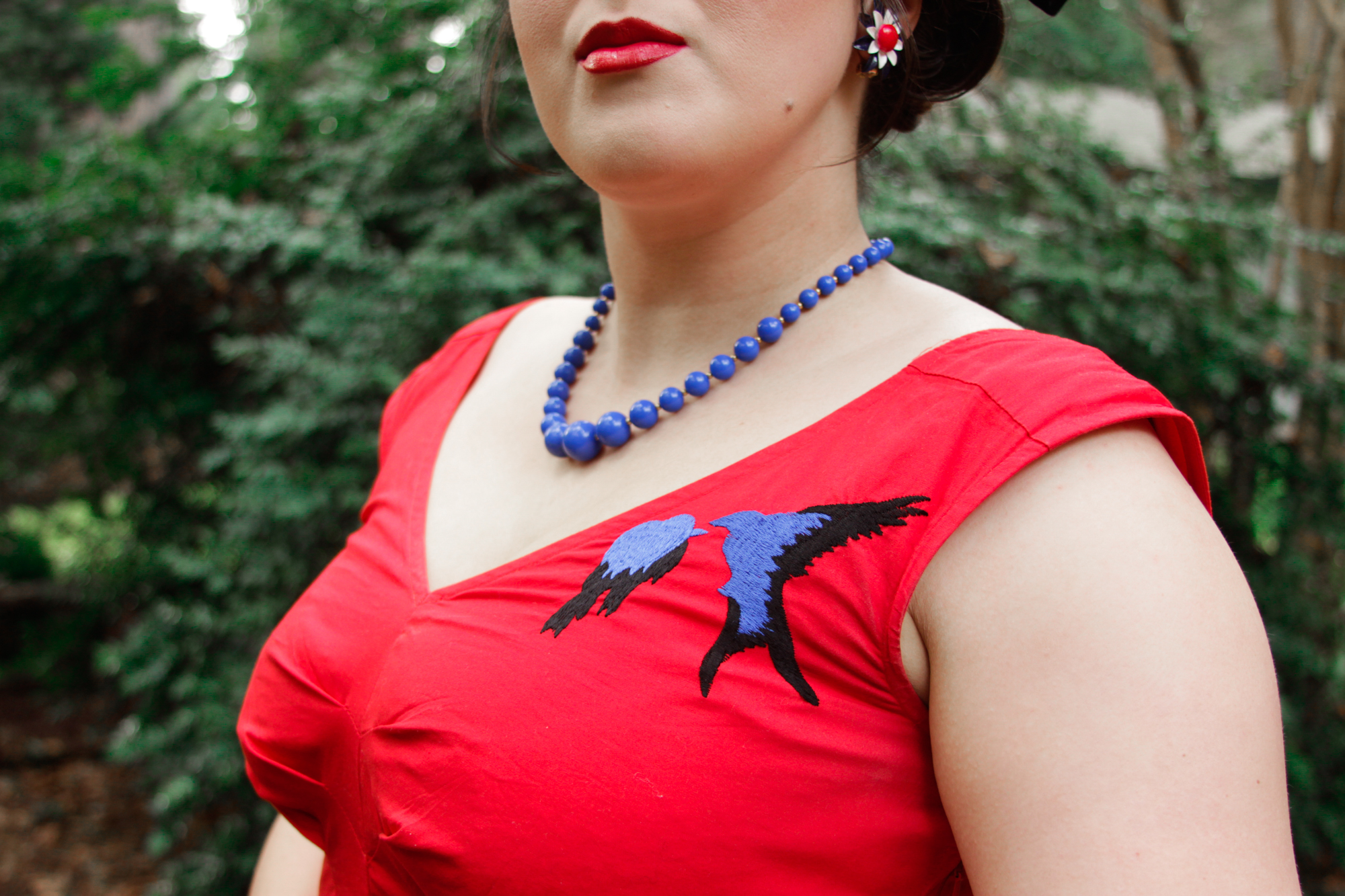 Welcome to February’s edition of the BBRBF Book Club! My apologies for being late this month; lots of things happened in a short amount of time, and I didn’t get time to sit and read as I normally would! As always, check out Sara, Noelle, Kat, and Helene for their reviews, and be sure to welcome Laci and Justyna as our newest wonderful members! Our little club is growing! If you want to join us, be sure to let us know. Next month we are reading Invisible Life of Ivan Isaenko.

As usual, here’s the synopsis: “When Margo’s niece becomes a runaway bride — taking with her a family heirloom– her mother offers Margo fifty grand to retrieve her spoiled daughter and the invaluable property she stole. Together with the jilted and justifiably crabby fiance, Margo sets out in a borrowed 1955 red MG on a cross-country chase and finds herself along the way” 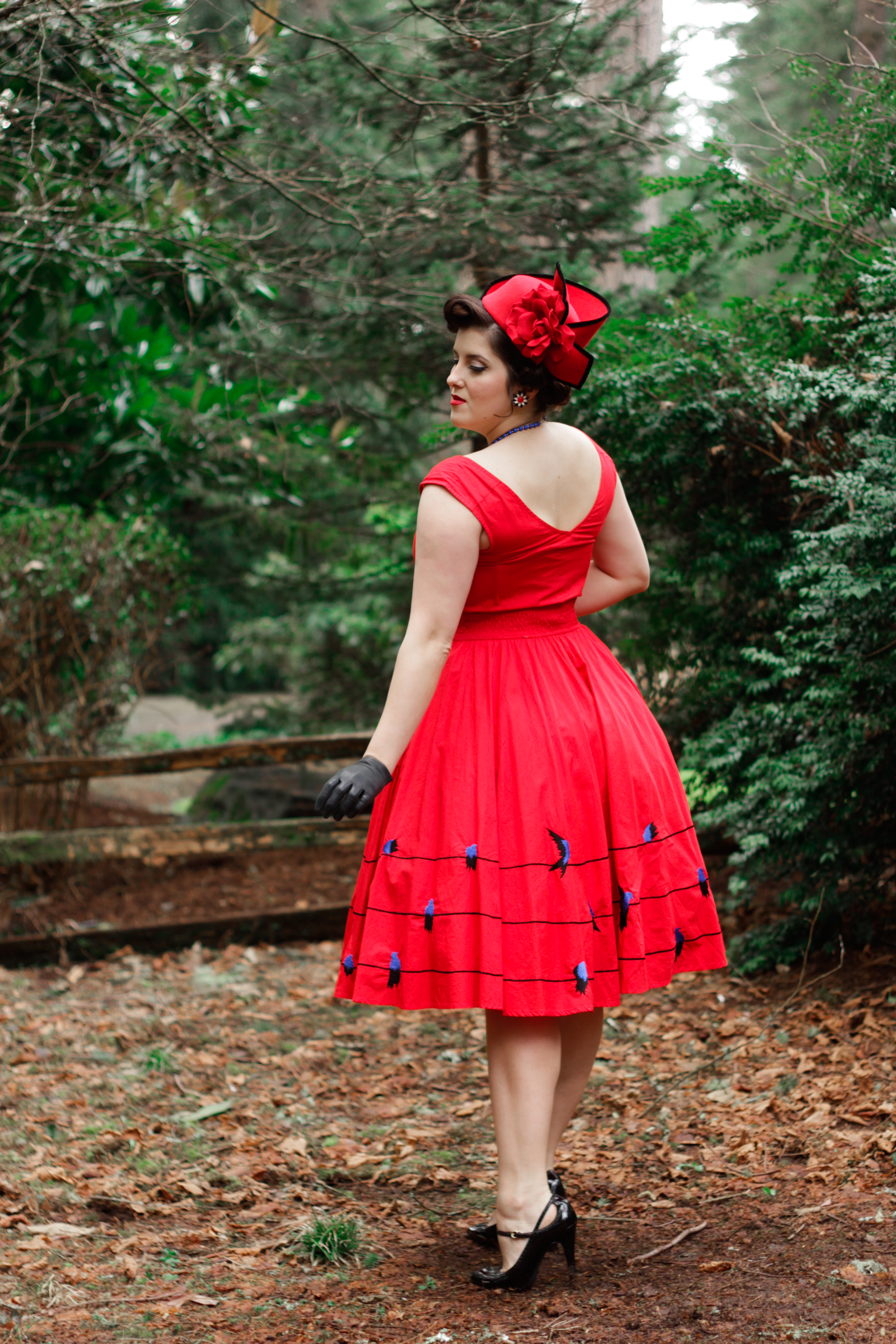 I actually did not intend to use this outfit for this review. I had shot this dress and my newest vintage hat (which I found on Etsy for ten dollars!) on Valentine’s day, but then by the time I’d half cooked up an outfit to go with The Bette Davis Club, it rained. However, this dress goes remarkably well with the yellow-and-red cover. We’ll just pretend I’m the human incarnation of Margo’s father’s classic 1955 MG TF. 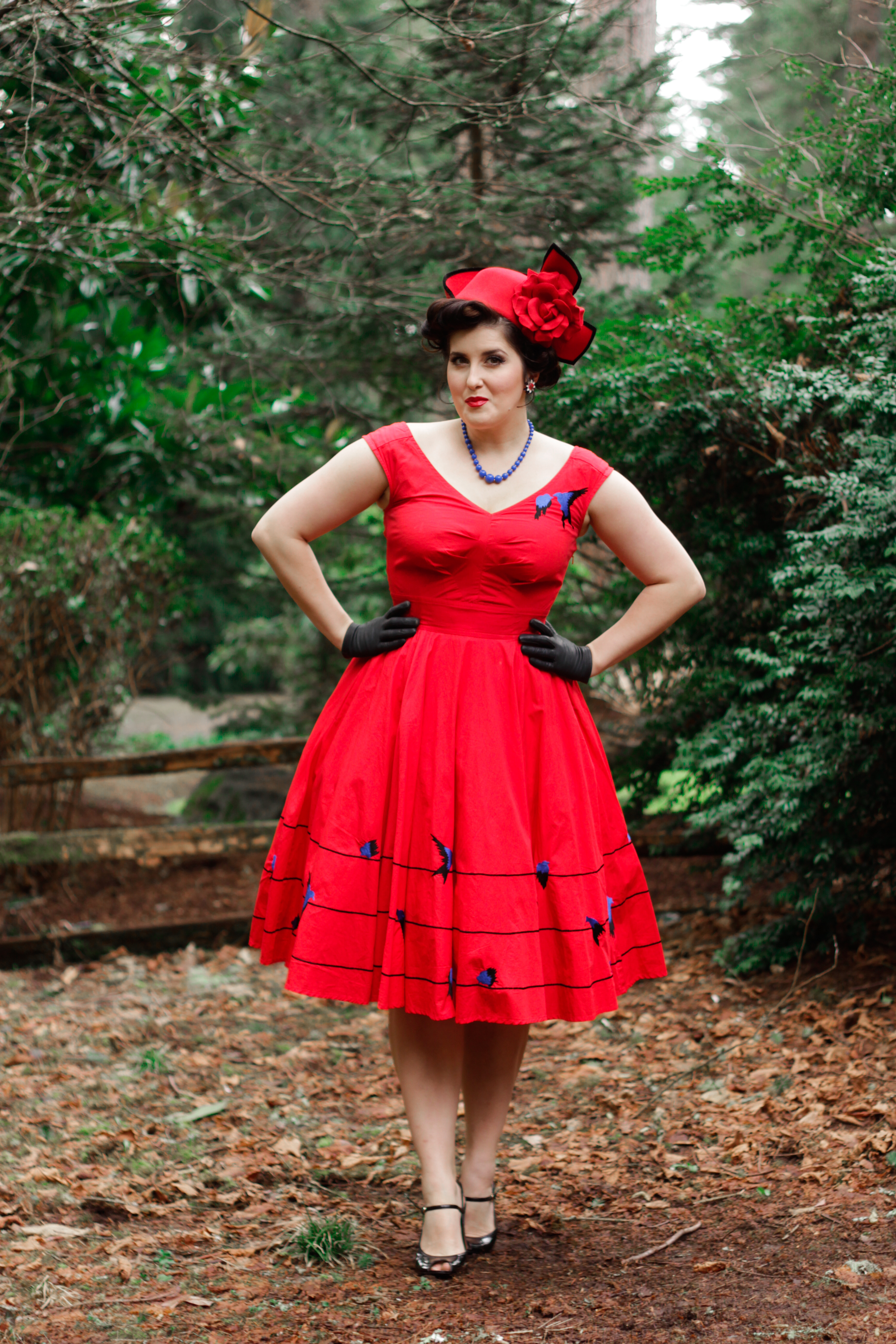 Now, I have a confession to make: I am still not done reading this book. I’ve been trying all day, but toddlers, man. I am, according to Kindle, 65% done and likely will finish tonight, at which point perhaps I’ll update this post with my review of the latter half!

For the former half, however, I can offer a little review! 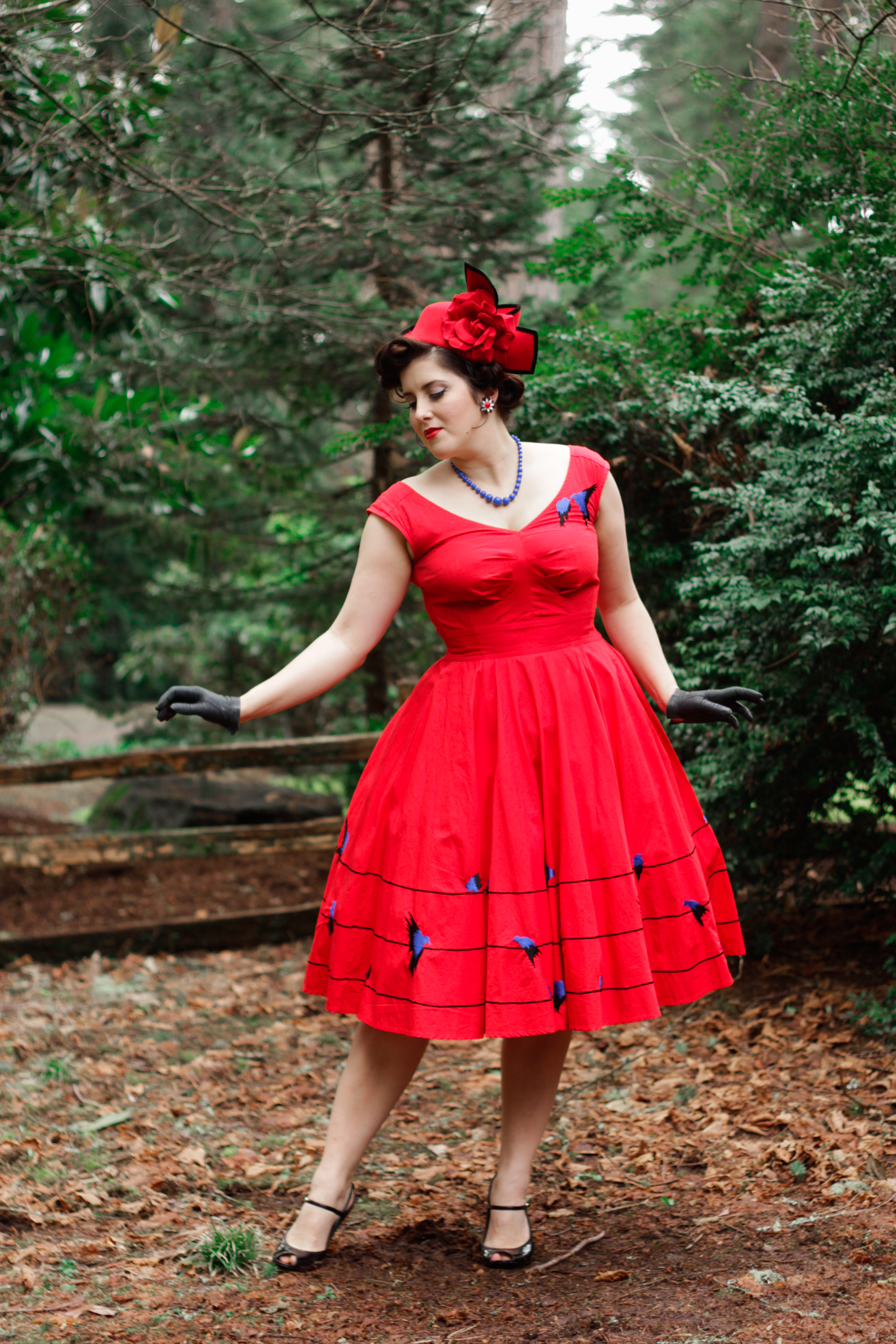 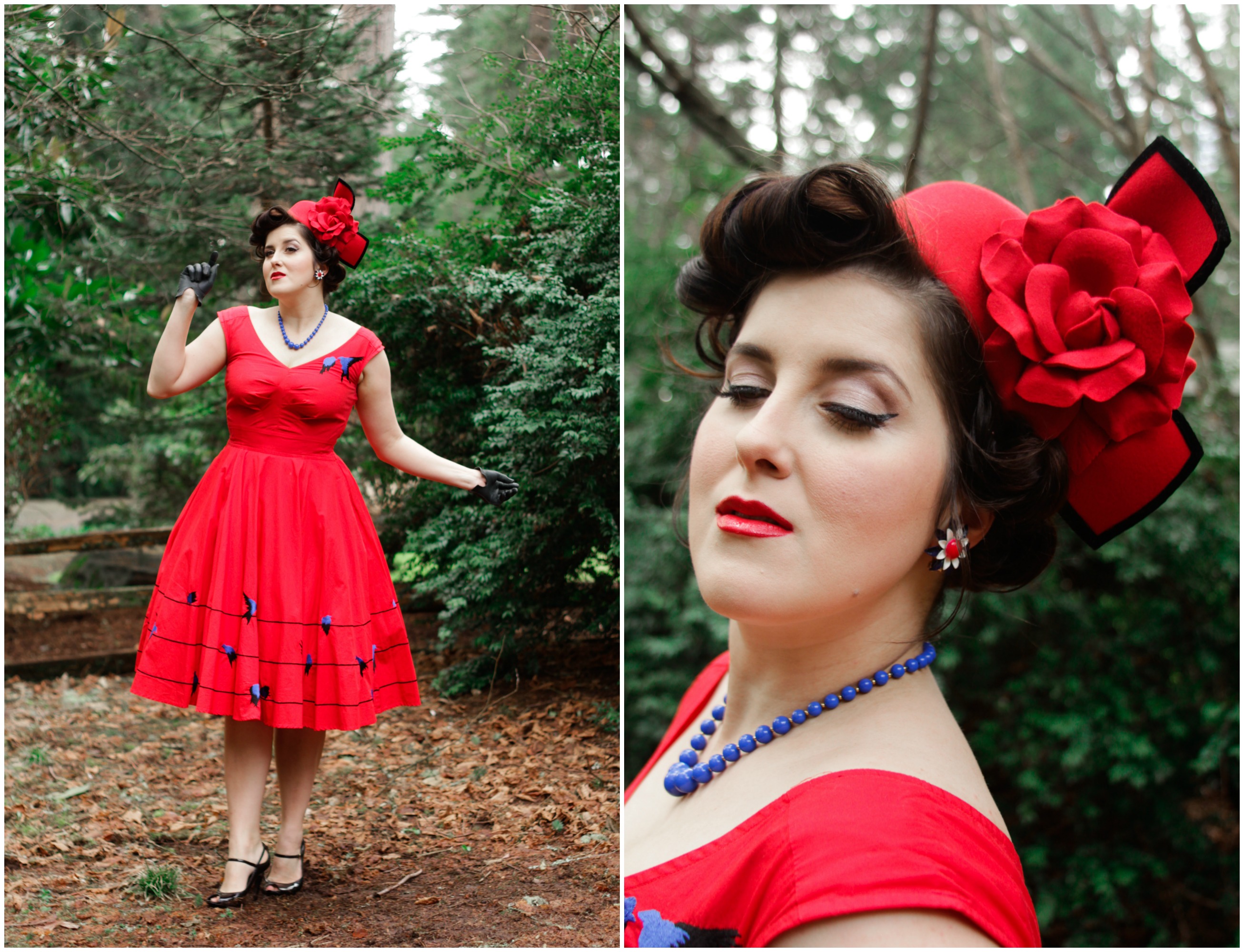 I found it hard to get into at first. It is the same quirky style of writing that many modern authors have taken on, with overly witty quips at first. When I began, I’ll be blunt, I thought I was probably going to hate it. I got tired of this style of writing with Swamplandia!, and was dreading getting through this novel.

However, after a few chapters the characters began to grow on me. I got used to the author’s present-tense style of writing (which is confusing at times) and started to invest in the adventure of Margo and Tully as they chase after his ex-bride. While I do think that their relationship felt a little stilted and awkward at first, and not in a purposeful way but as if the author just wasn’t quite sure how to put them together naturally, it started to smooth out as they hit roadblock after roadblock in their search. With time, they grew to understand each other, and it’s almost as if the author grew with them. 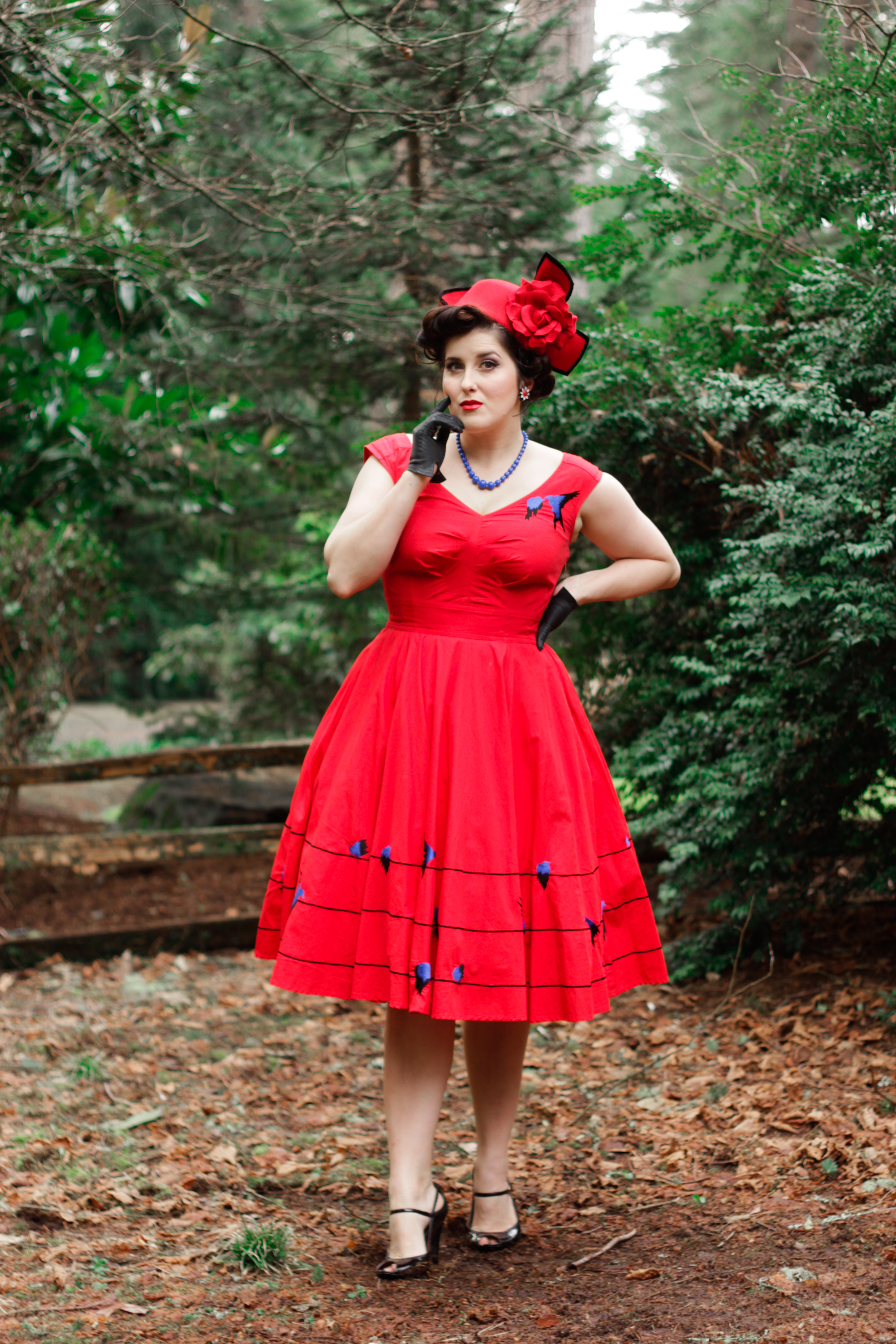 I love how Margo’s carefree and careless personality clashes with Tully’s more sedate and sensible one, how they contrast between Margo being somewhat of a floater and Tully being established in life. I like that you can see Tully begin to care about Margo as a friend, through his bugging her to quit smoking, and Margo’s reciprocation of that friendship through realizing he’s not just a jilted lover, but his own man.

Since I don’t feel like I can give a full review not having finished the book, I’m going to leave this post a bit sparse so I can update it when I’m finally done. I apologize for this half-review! And for being so late with my post. Hopefully next month won’t be so scattered for me. 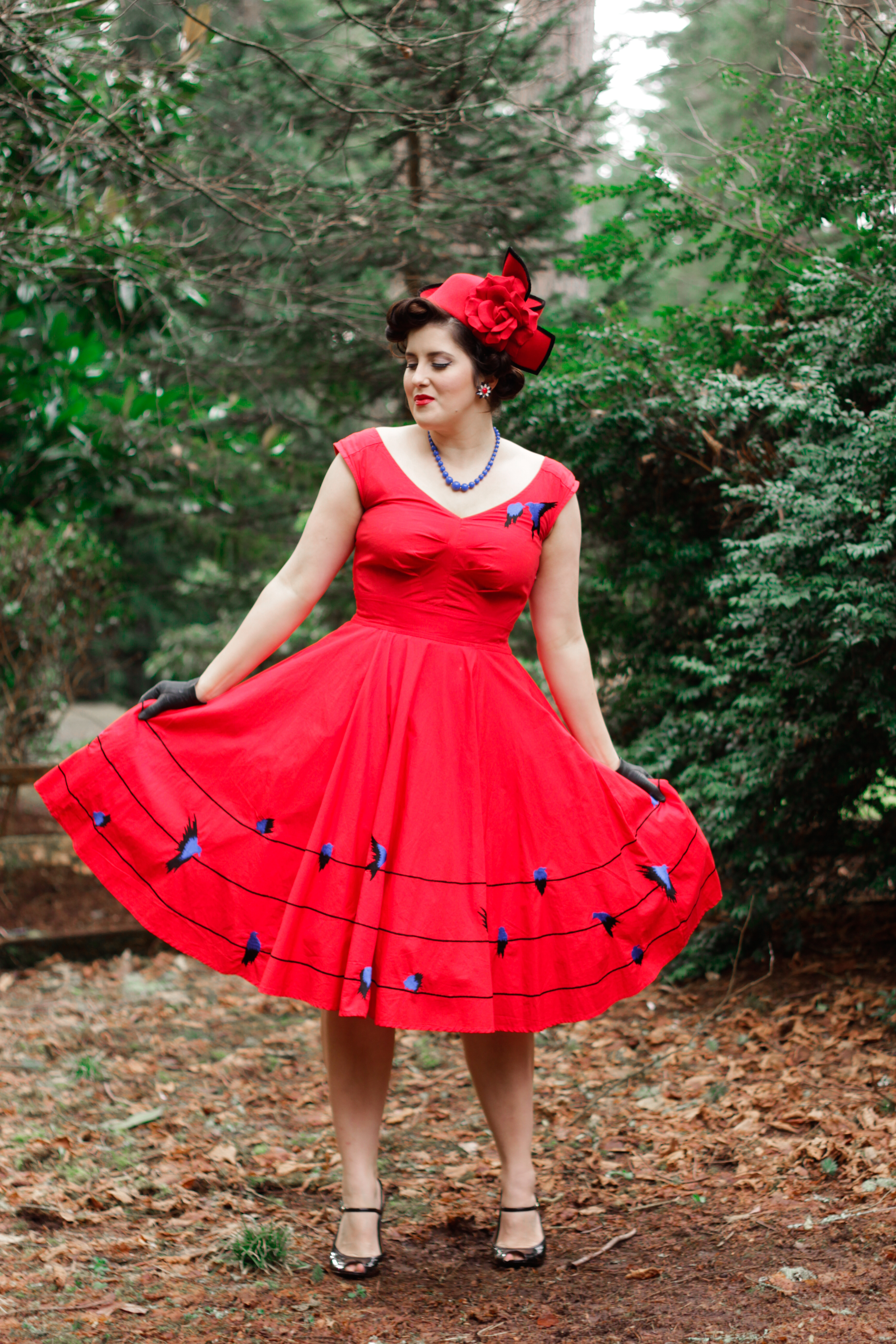 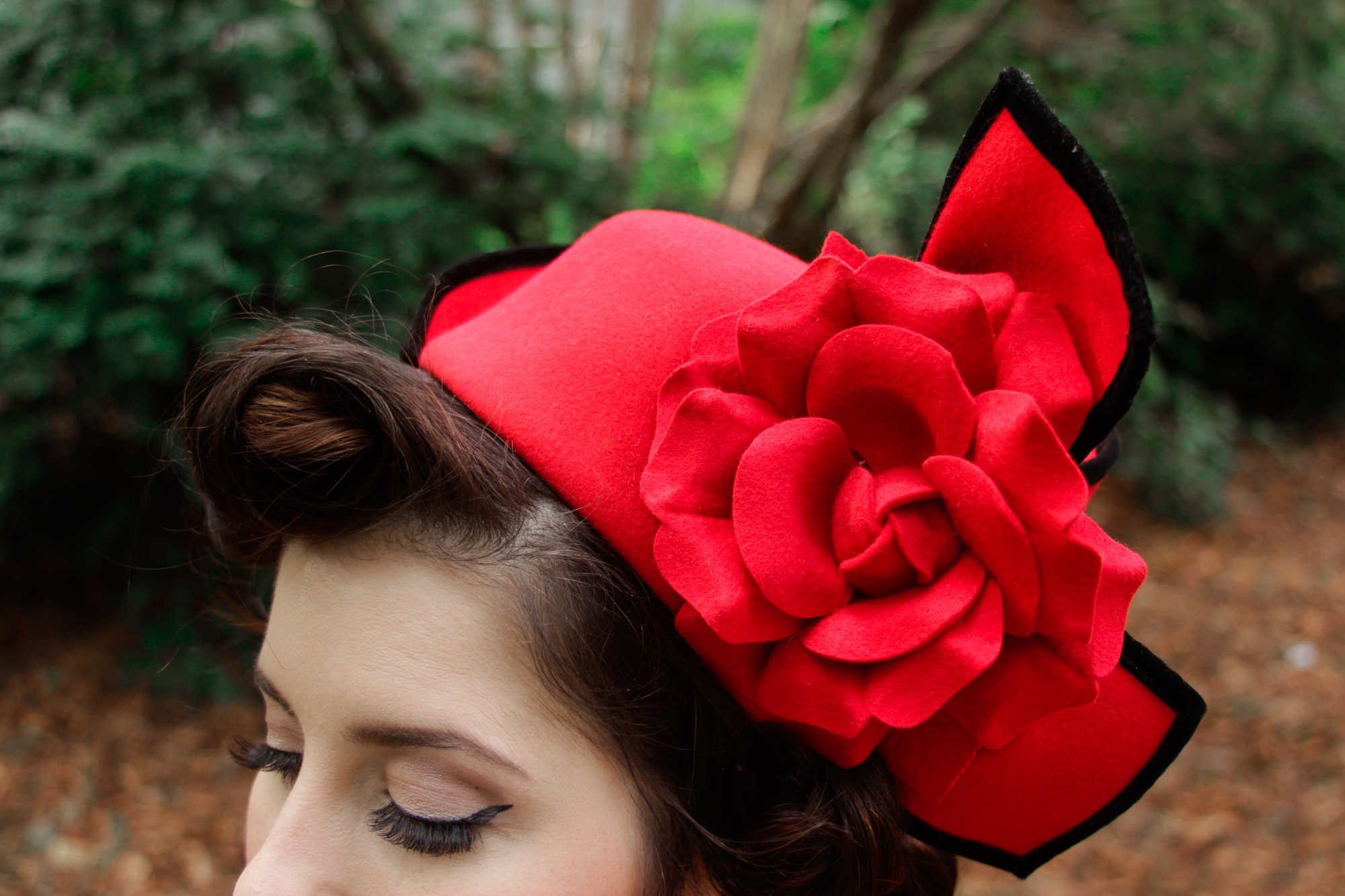 But now let’s chat about this outfit, and most specifically, this hat. I feel like this ensemble is also so very apt for this review, even though by accident, because early on in the book Margo and Tully discuss the various value that things have. Some are valuable because they can bring in a lot of cash. Others are valuable because of sentimentality. Others, as Margo muses her friend Dottie told her, give the finder a sense almost of (she very bluntly put it) arousal, a rush of feeling even though there’s no sentimentality or large sums of money involved.

This hat, for me, holds the latter value. While I was browsing Etsy for the perfect hat to pair with the lipstick dress — which, by the way, arrived too late and was never marked as shipped, nor was it shipped via priority mail as claimed in their shop, and they charge almost $2 extra if you require a tracking number. Which was on my box when it arrived and is free of charge via USPS mail. And, the hat arrived smelling like cigarette smoke and heavy perfume, which was not disclosed in the listing. So… avoid this seller!

Anyway, as I was browsing for the perfect hat to pair with the lipstick dress, I stumbled upon this beauty and felt a rush of excitement. It was listed as a brand new 1950’s fascinator and the seller was letting it go for only $10! 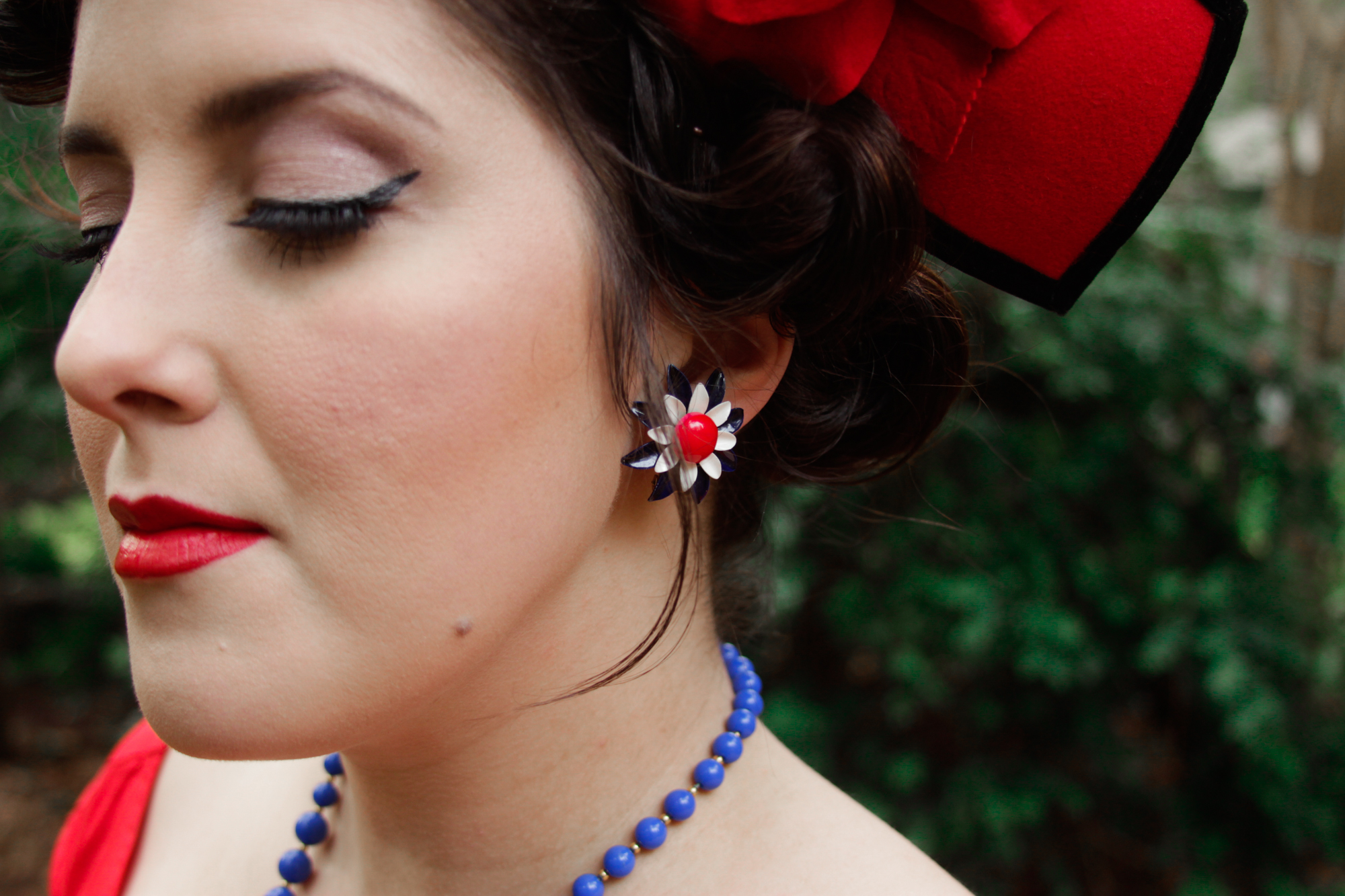 Upon arrival — which was swift, taking only three days to arrive — I found it to be even more beautiful than it looked. It is in absolutely perfect condition. I did some research though, and discovered that it’s possibly actually 1980’s or newer, which doesn’t really bother me. The seller likely assumed 1950’s based on the look of the hat (something I have done on occasion until I am corrected by research) and I don’t believe they meant to mislead anyone. If I am correct in my research on the tag, the designer, B Michael, began designing hats under Oscar de la Renta, Nolan Miller, and Louis Faurad for the show Dynasty in the 1980’s, and following his success there decided to launch his own line, which came out in 1999.

Although, I have found several listings on Etsy and eBay with this same tag, which reads b. Michael New York and looks like this, and I’m not 100% sure whether this is the same B Michael, or whether there was indeed a vintage designer from whom this and other hats sprung. If anyone knows, please do tell me! 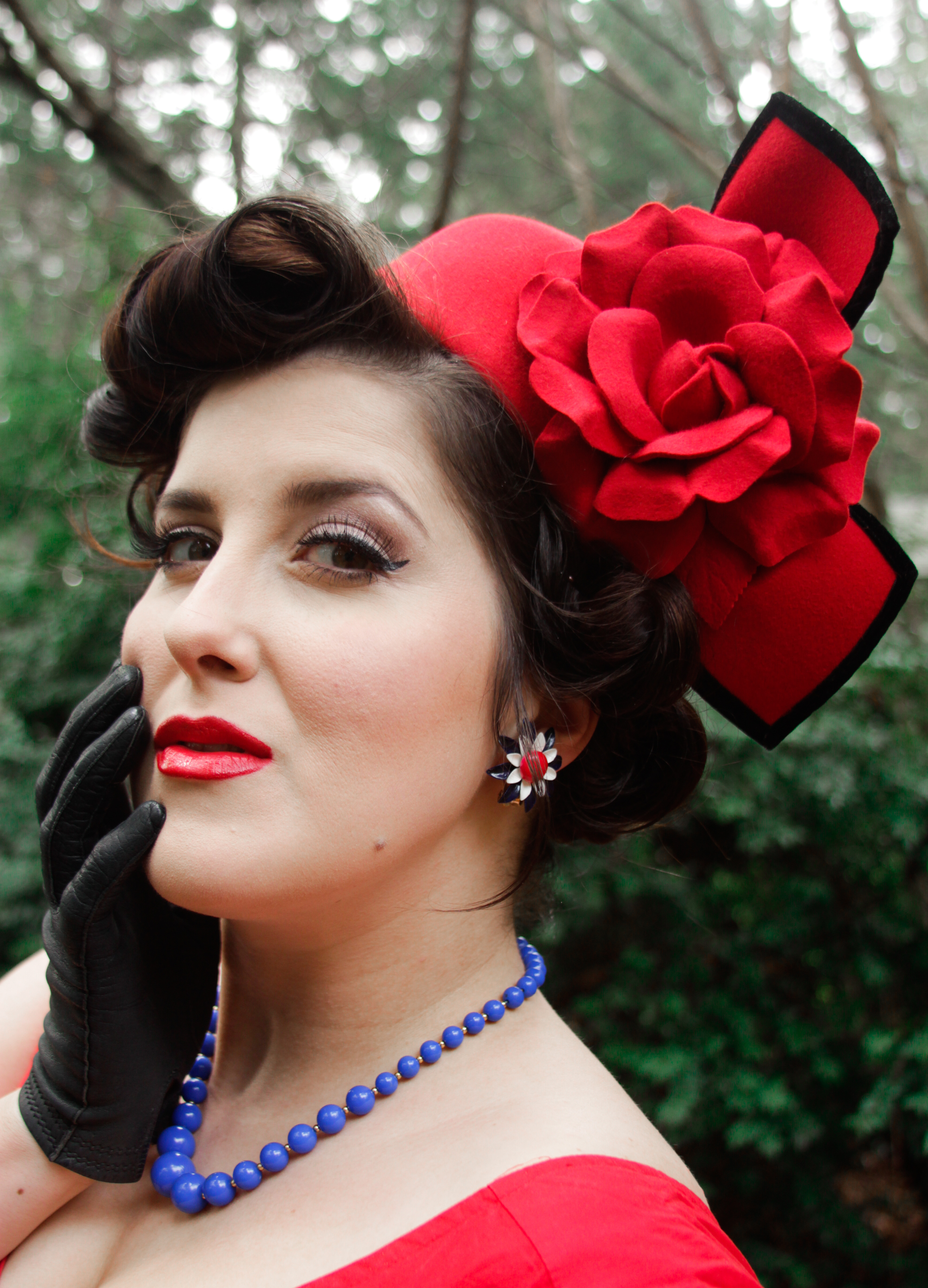 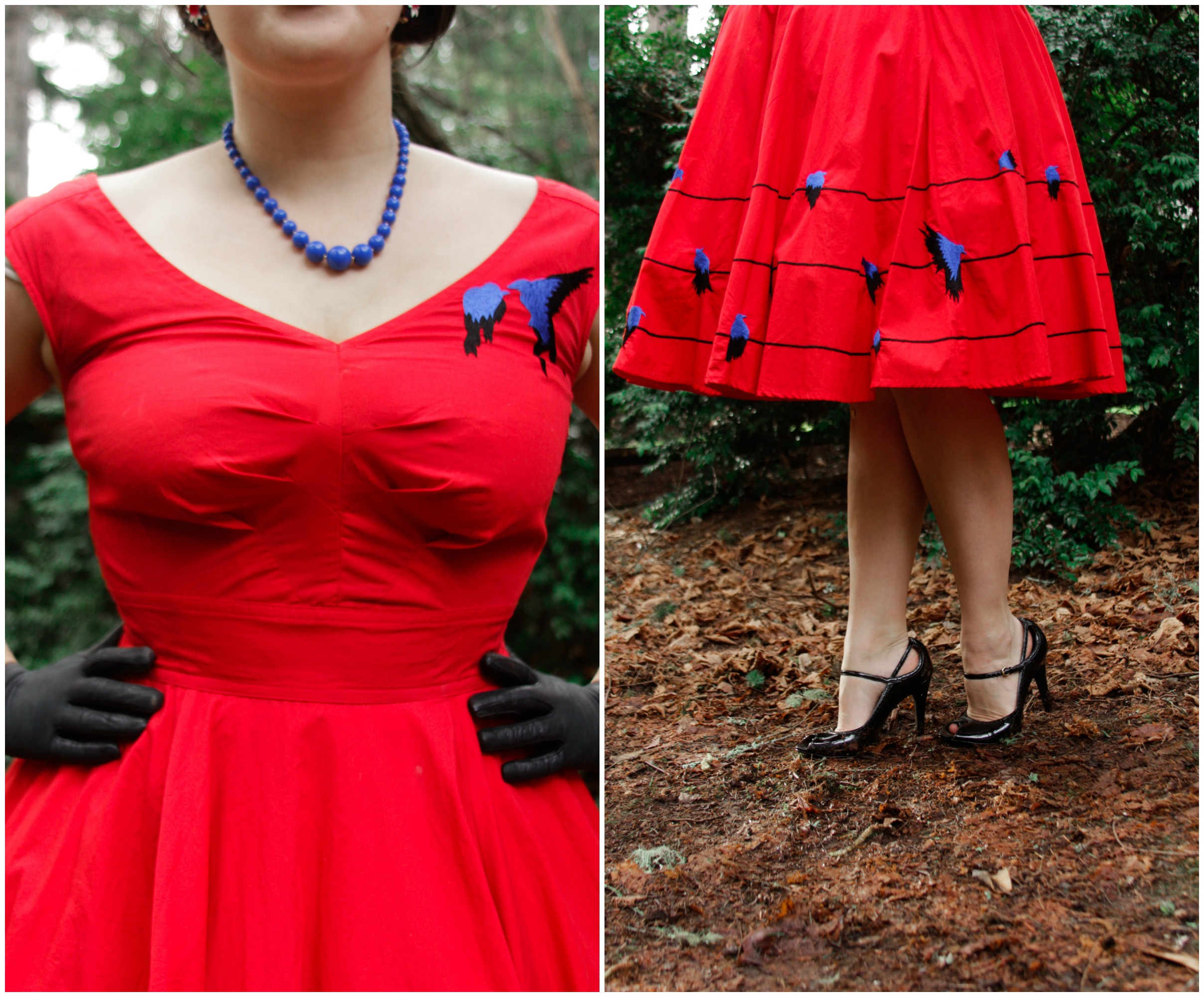 The feeling I had placing this gorgeous accessory on my head was thrilling. Ever since making myself wear a hat out in public, I’ve felt an insatiable desire to have the perfect hat for every outfit. The wall in my room has quickly become a place to hang beautiful head toppers, and with the help of some friends and some excellent finds online, I’m starting to have quite the collection! This one, though, tops all the rest. It is such a beautifully constructed piece, like art for your head.

And, when I read the passage in the book of the owner of Mommie Dearest going on about the artifacts from the stars and how he felt about them, I could so relate! Do any of you have feelings about things that maybe aren’t super valuable to anyone else, but for which you feel a thrill? For me, it’s vintage pieces, or items that just have a story behind them. I love the history of pre-loved clothes and it’s such a thrill to find beautiful pieces that were once a part of someone’s life once upon a time! 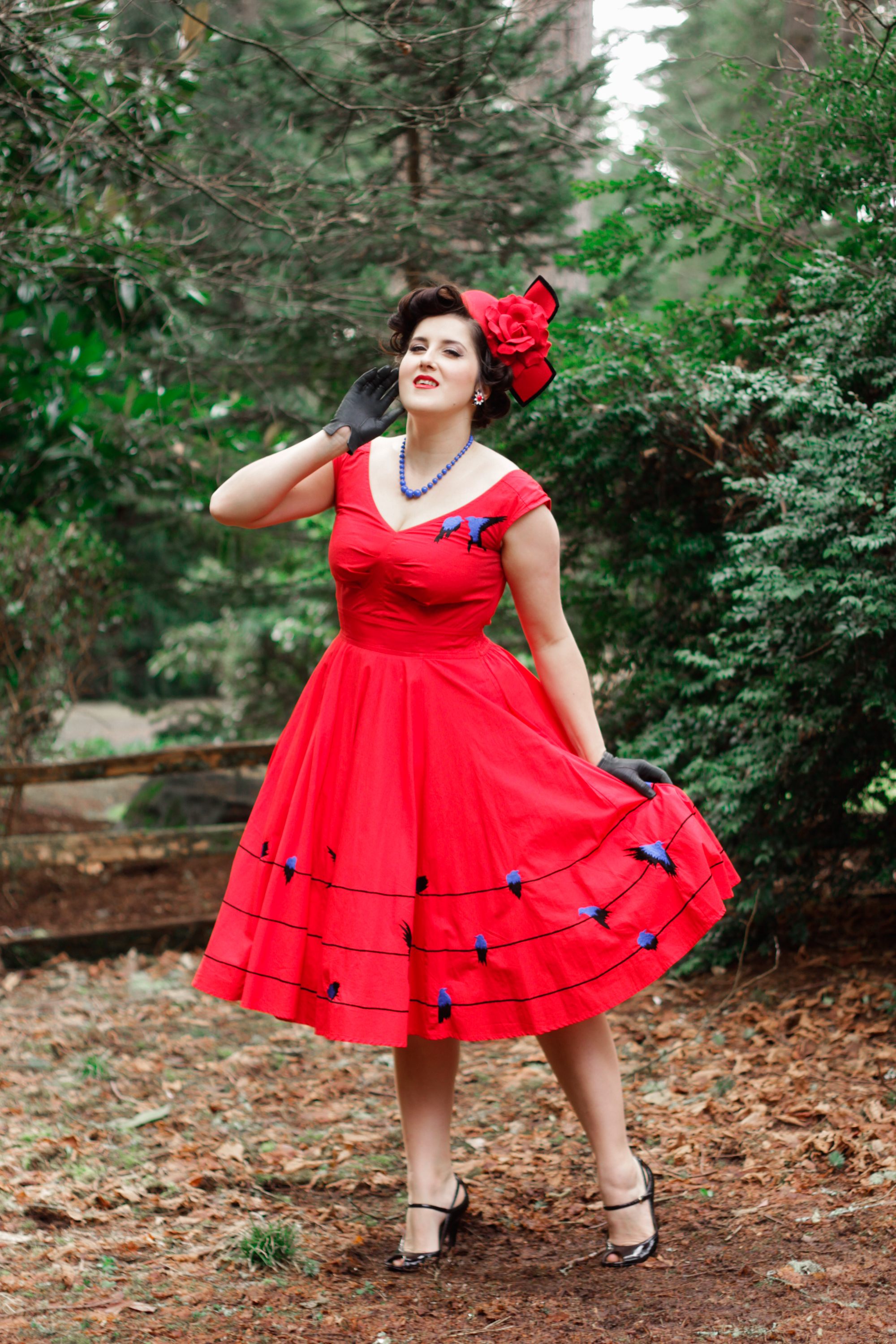