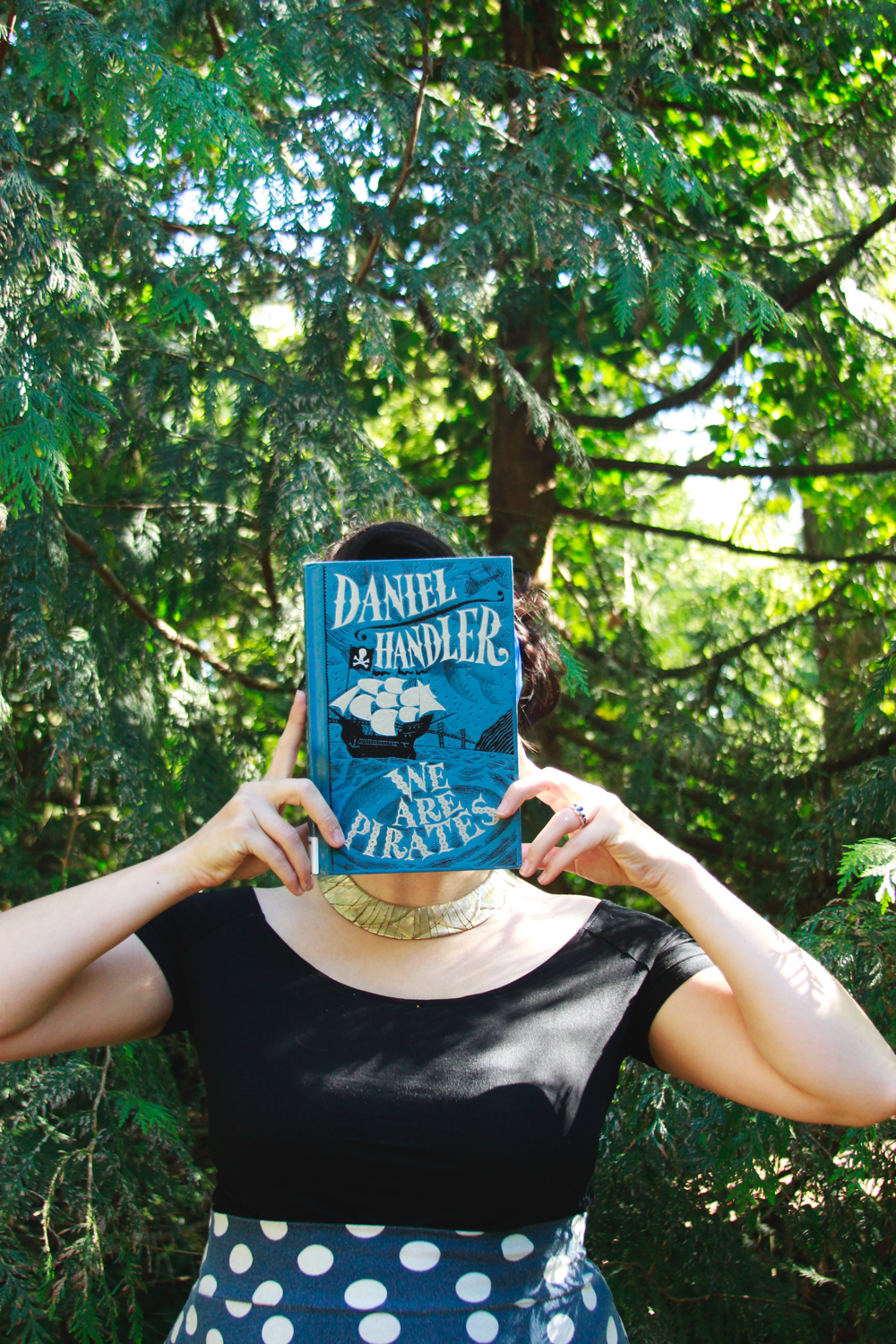 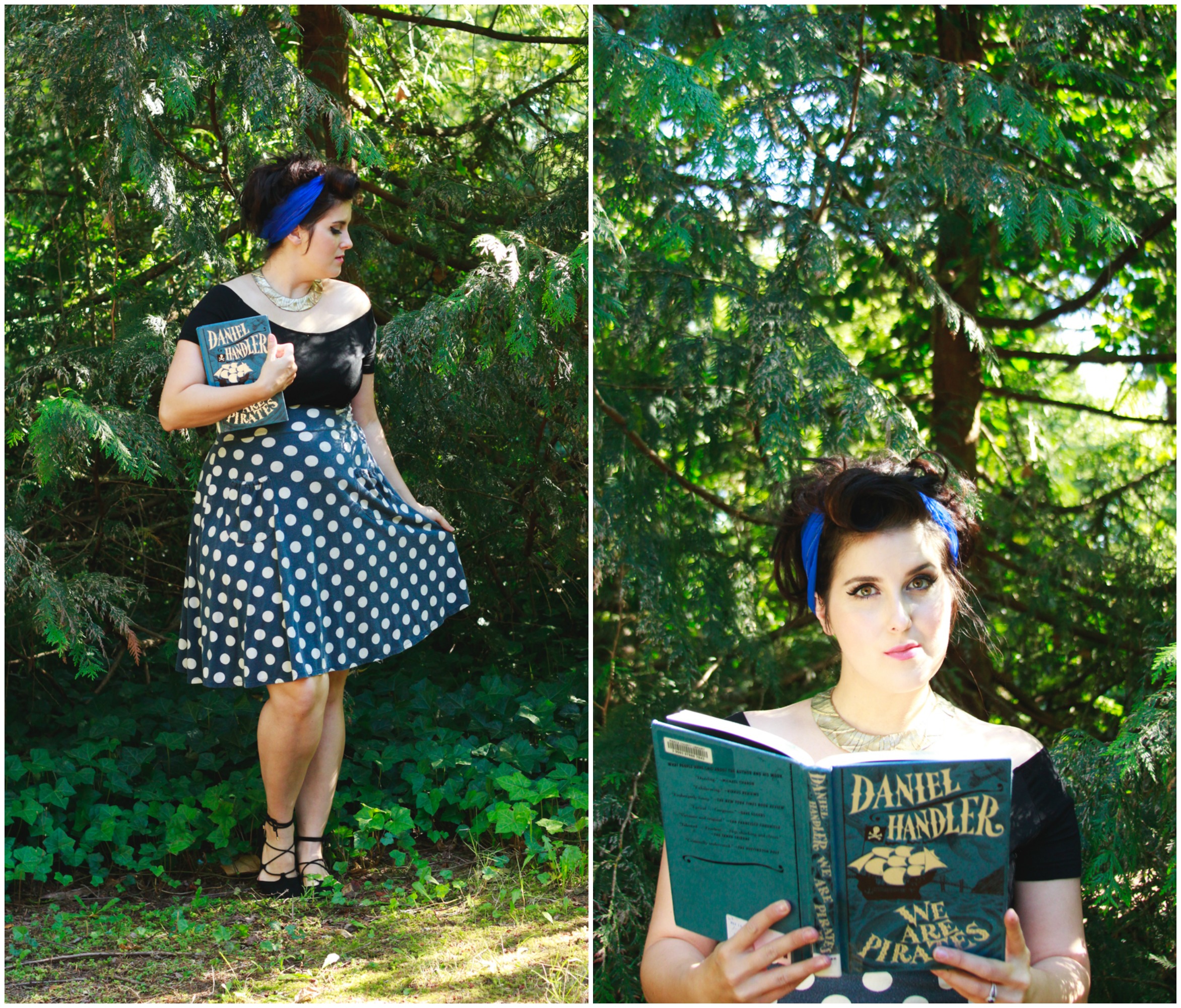 Much like my day, this book was a disaster.

But I’m getting ahead of myself. In this sixth (?) installation of the BBRBF book club, don’t forget to read the reviews of Sara, Noelle, Lyndsey, Helene, and Katherine! Helene chose this month, although she had also suggested The Girl On the Train, but due to my library not having that in stock, We Are Pirates by Daniel Handler was on the board. 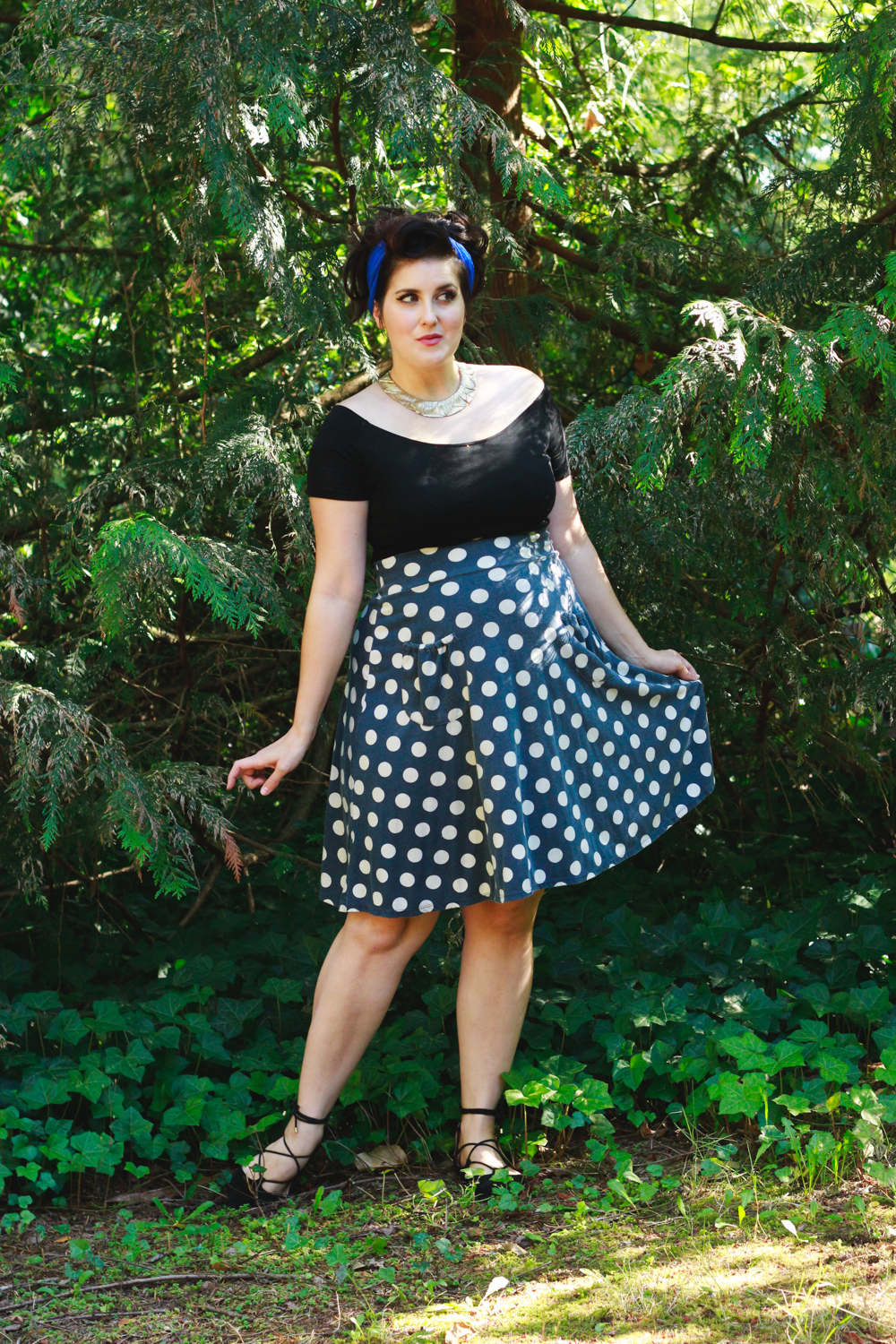 As always, the synopsis, via Goodreads:

“A boat has gone missing. Goods have been stolen. There is blood in the water. It is the twenty-first century and a crew of pirates is terrorizing the San Francisco Bay.

Phil is a husband, a father, a struggling radio producer and the owner of a large condo with a view of the water. But he’d like to be a rebel and a fortune hunter.

Gwen is his daughter. She’s fourteen. She’s a student, a swimmer and a best friend. But she’d like to be an adventurer and an outlaw.

Phil teams up with his young, attractive assistant. They head for the open road, attending a conference to seal a deal.

Gwen teams up with a new, fierce friend and some restless souls. They head for the open sea, stealing a boat to hunt for treasure.

We Are Pirates! is a novel about our desperate searches for happiness and freedom, about our wild journeys beyond the boundaries of our ordinary lives.

Also, it’s about a teenage girl who pulls together a ragtag crew to commit mayhem in the San Francisco Bay, while her hapless father tries to get her home.” 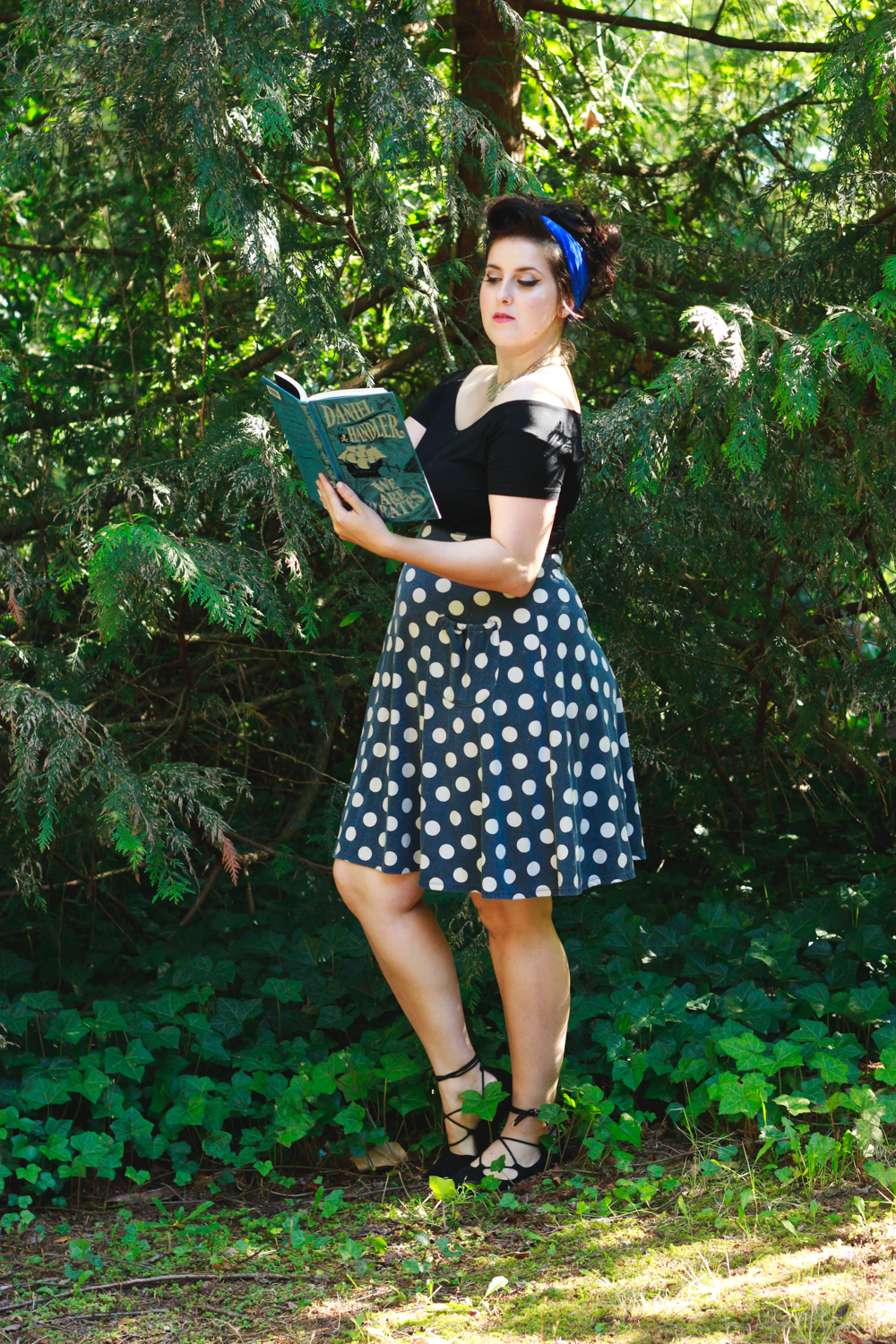 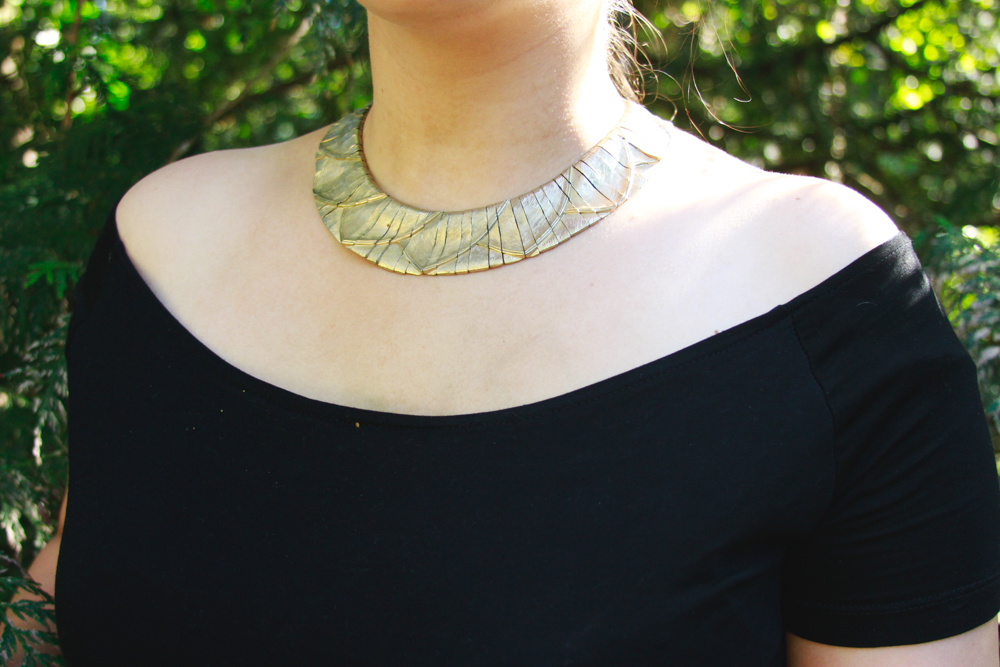 The title seems clever, the premise is interesting, and it’s the same man who wrote as Lemony Snicket, which I love! And at first, it seemed that I would like it. Handler’s writing is dark and witty, two things I am usually drawn to. But the storyline… well. There is a sense of dirtiness to this book that makes it read like a teenage boy desperately trying to seem adult. As if Handler came away from writing A Series of Unfortunate Events and decided to force himself into the adult genre with references to naughty body parts and dirty secrets and blood. 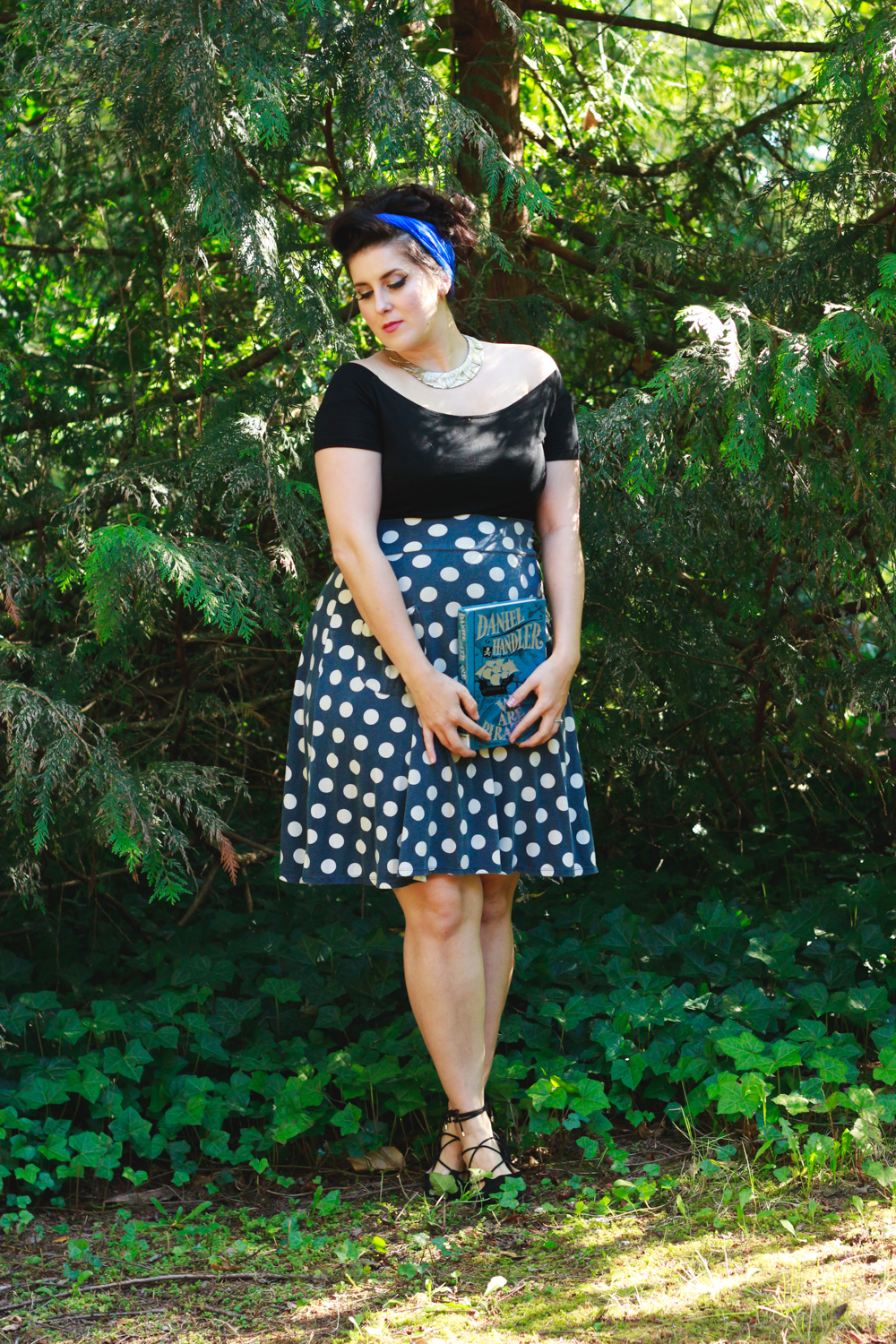 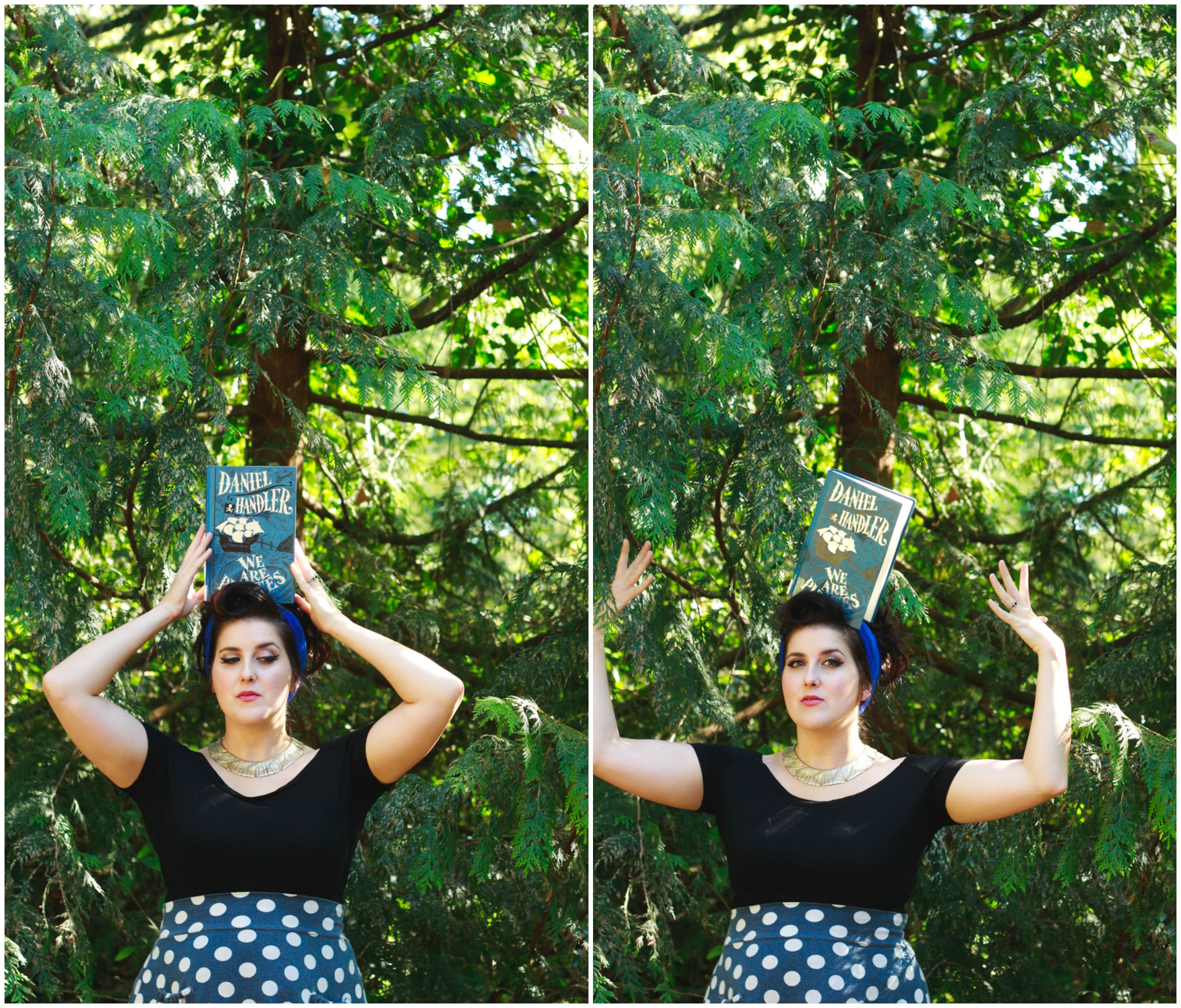 Friends, reading a book that just makes me not want to read is a bad sign indeed. The grungy feel of the book intensified the further along it got, and once Gwen a fourteen year old girl accompanied by her teenage best friend, a shanghaied boy from her school, a senile old man, and a tired nurse from a nursing home actually steal a boat to terrorize the bay and then kill some people, it lost me entirely. Just read that sentence a few times and let it sink in. 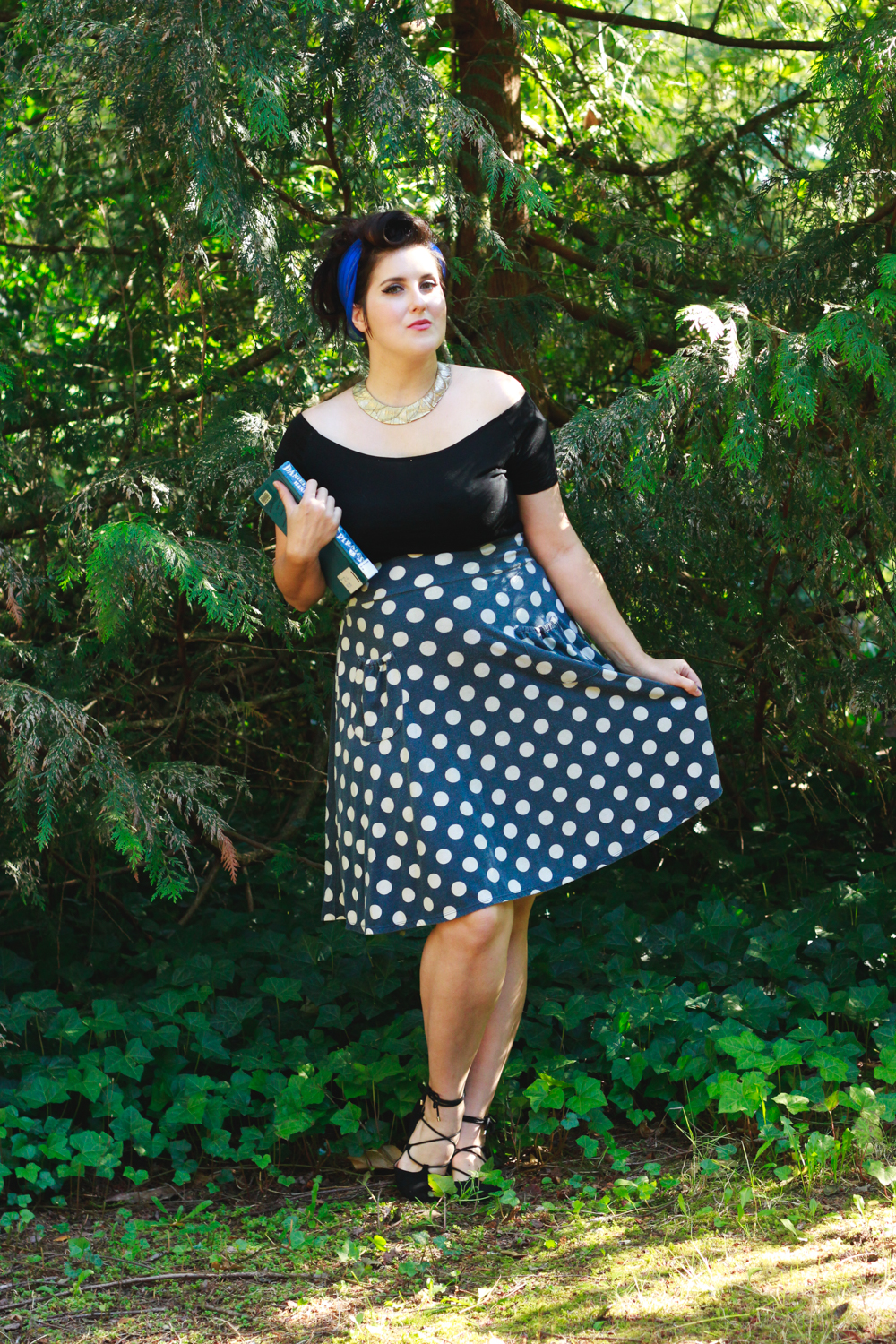 On the other side of things is Phil Needle, Gwen’s dad, a man struggling to find his breakthrough in the industry, who takes a road trip with his assistant – whom he fantasizes about – and comes upon all sorts of mishaps as he tries to grasp at the strings of success. His story I could almost have gone along with, had he not been so… boring.

For someone who writes so wittily, Handler’s entire book just doesn’t happen. His prose is quite good. His storytelling? It’s a mess.

After not enjoying the book, I found myself stumped for an outfit for two weeks. I wracked my brain for the perfect accompaniment to the cover, and found myself lacking. It wasn’t until last night that I finally settled on this skirt and top.

But then today, as life would have it: my kids had a rough two hours during which I spent 1.5 hours calming them alternatively, and only 30 minutes actually present at Bible Study. And then Asa removed his poopy diaper and sat on some things. And then a very large spider landed on my camera as I was shooting. And then Evie’s teething got worse and to top it all off  Lightroom updated and gives me a funky blue space in place of photo previews.

It is really a miracle that these photos came about at all. Thankfully, I have a preset that I can fall back on for sunlit photos, and I was able to just apply the preset, export the photos, and hope for the best. 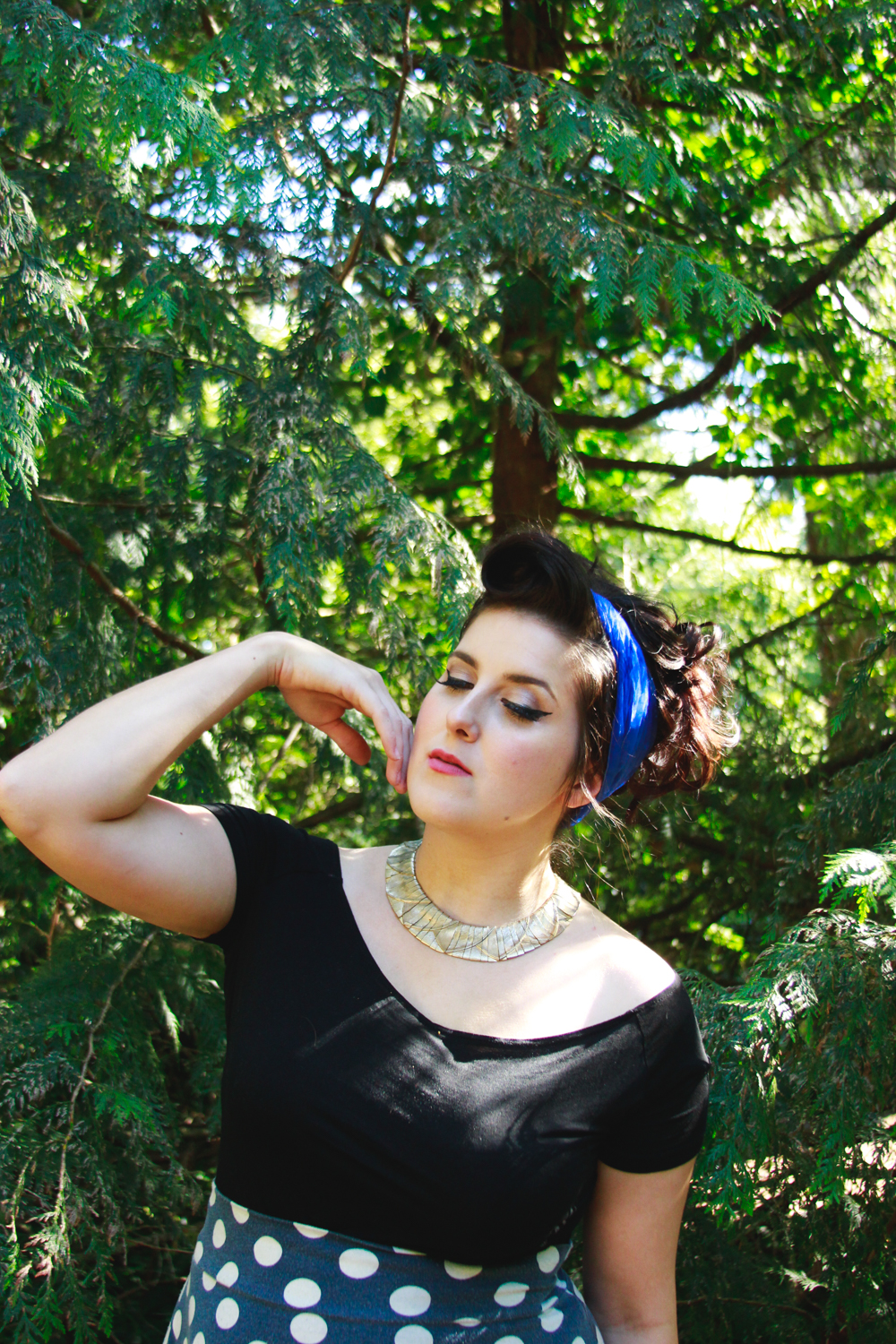 It’s fitting then that this post, and this book, were just a mess.

Instead of feeling entertained by witty writing that should have had me intrigued and inspired, I was bored and felt like nothing happened. They stole a boat, killed some people, she ran away, he had an affair, the grandpa is senile… and yet I could not force myself to be captivated.

And the storyline was a huge mess of not quite knowing how events and people were connected. I didn’t even realize that part of it was a flash forward until I read the other reviews and someone mentioned it. It was so discombobulated and attempting-to-add-plot-twists-all-the-time that I just got lost and tired of the story halfway through. 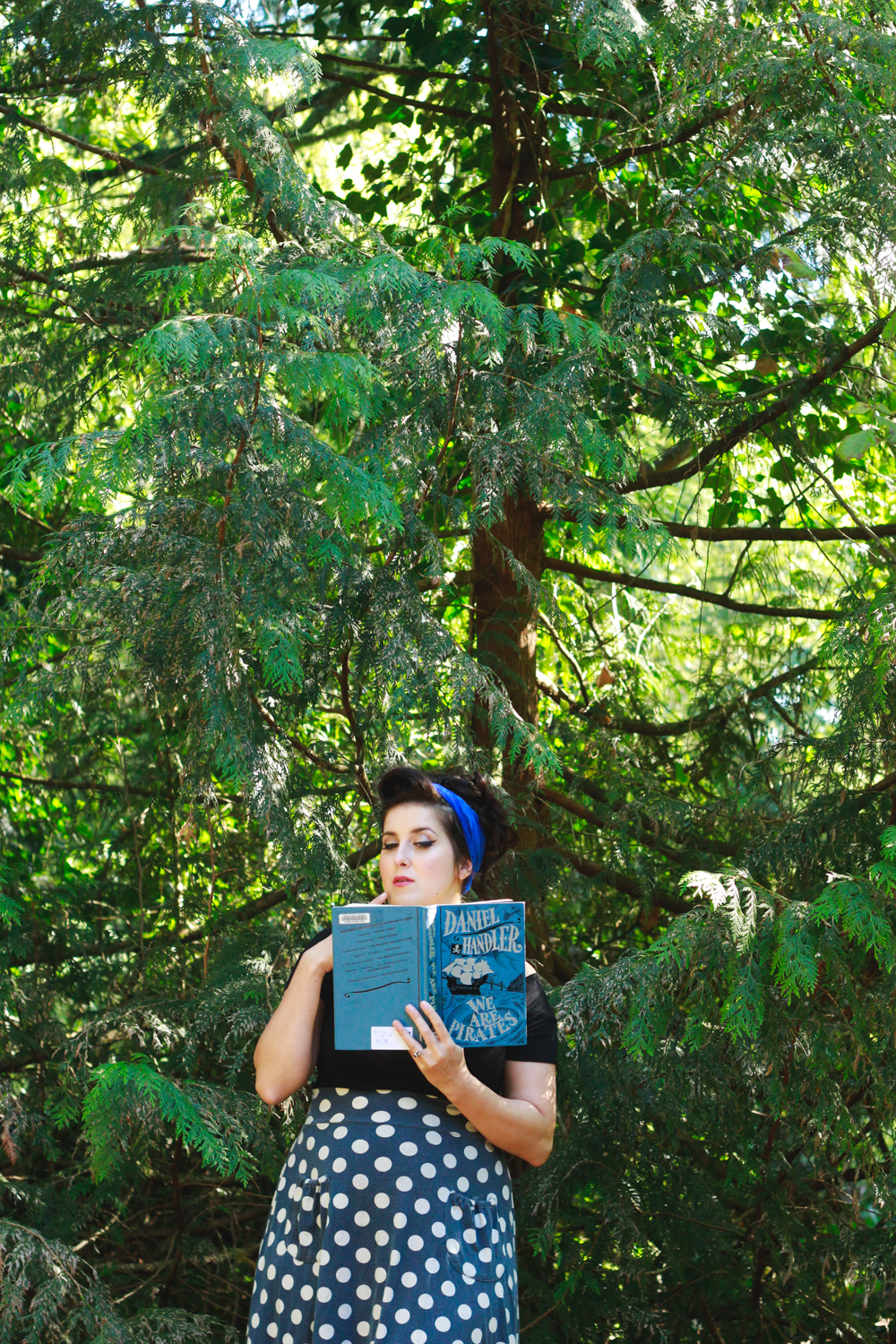 At least I can say that I had one success today in getting dressed, yes?

When I started the day I thought I would have nothing to talk about in this post, yet here we are and I’ve written an entire review without trying. If you can call this a review, that is. It pains me to give such a bad review to an author that I loved so much for his other books, but such is life. You win some, you lose some. I feel bad as well to be so scathing towards a book that one of our wonderful BBRBF Book Club members chose, but she knows it’s not her fault the book was so bad! 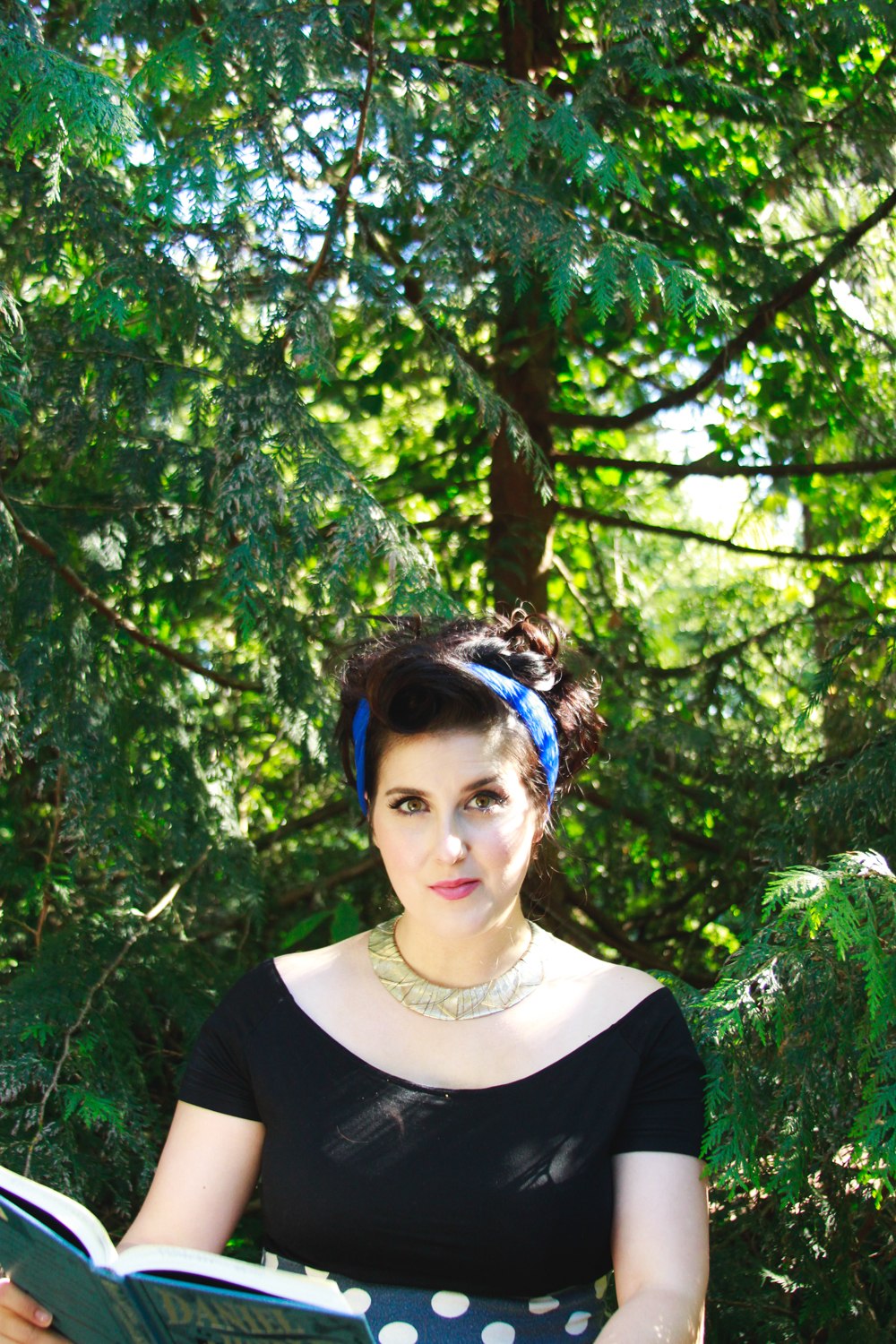 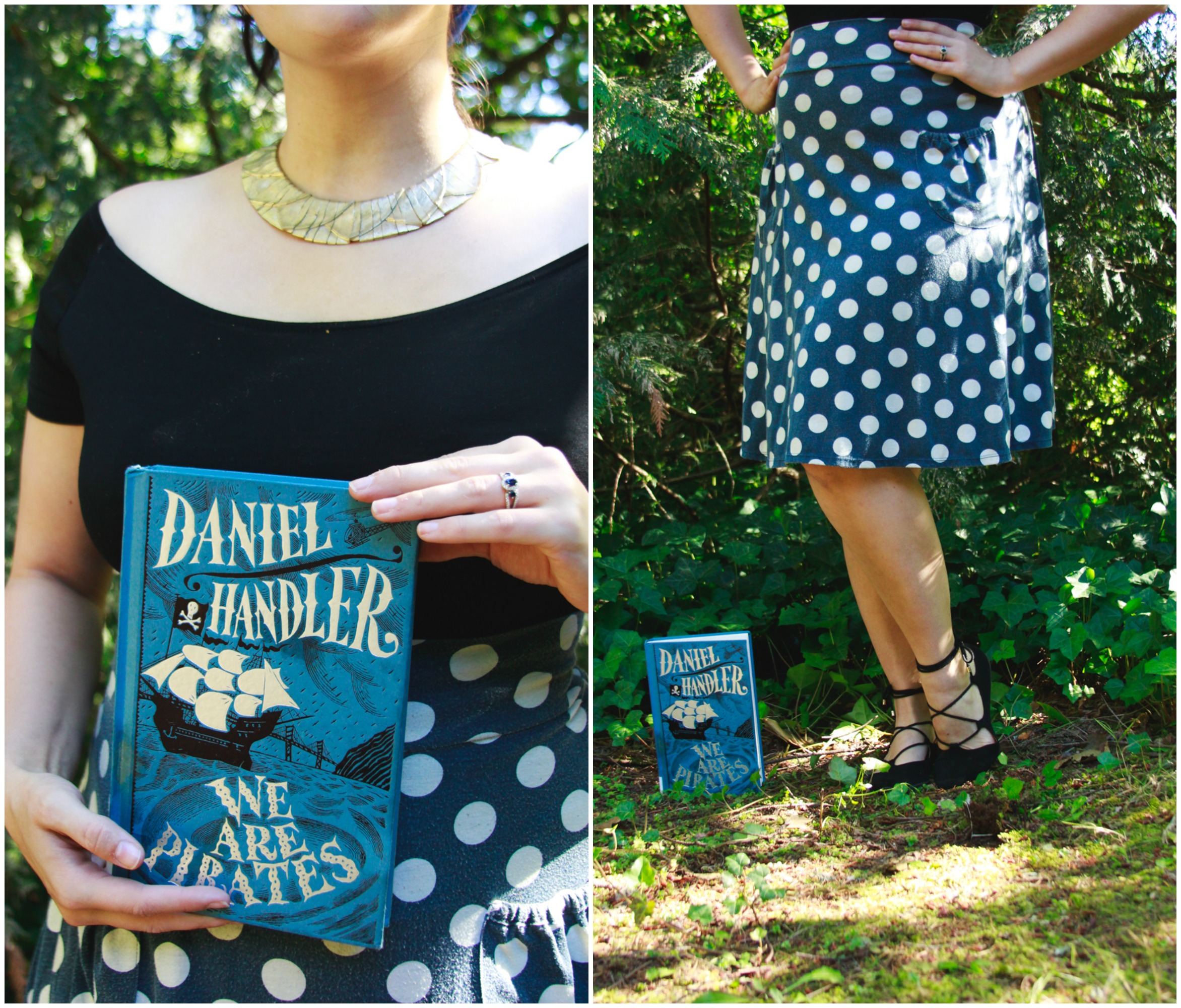 Perhaps the one good thing about this entire day, this post, and this book, was that I persisted and succeeded in putting together a post and a review and even a video. Things that, when I woke up, I did not think would happen.

Have you read We Are Pirates? What did you think?

Join us next month when we read Mary Shelley’s Frankenstein! I can guarantee I’ll be posting something super fun and a little different than usual, it being October and all! 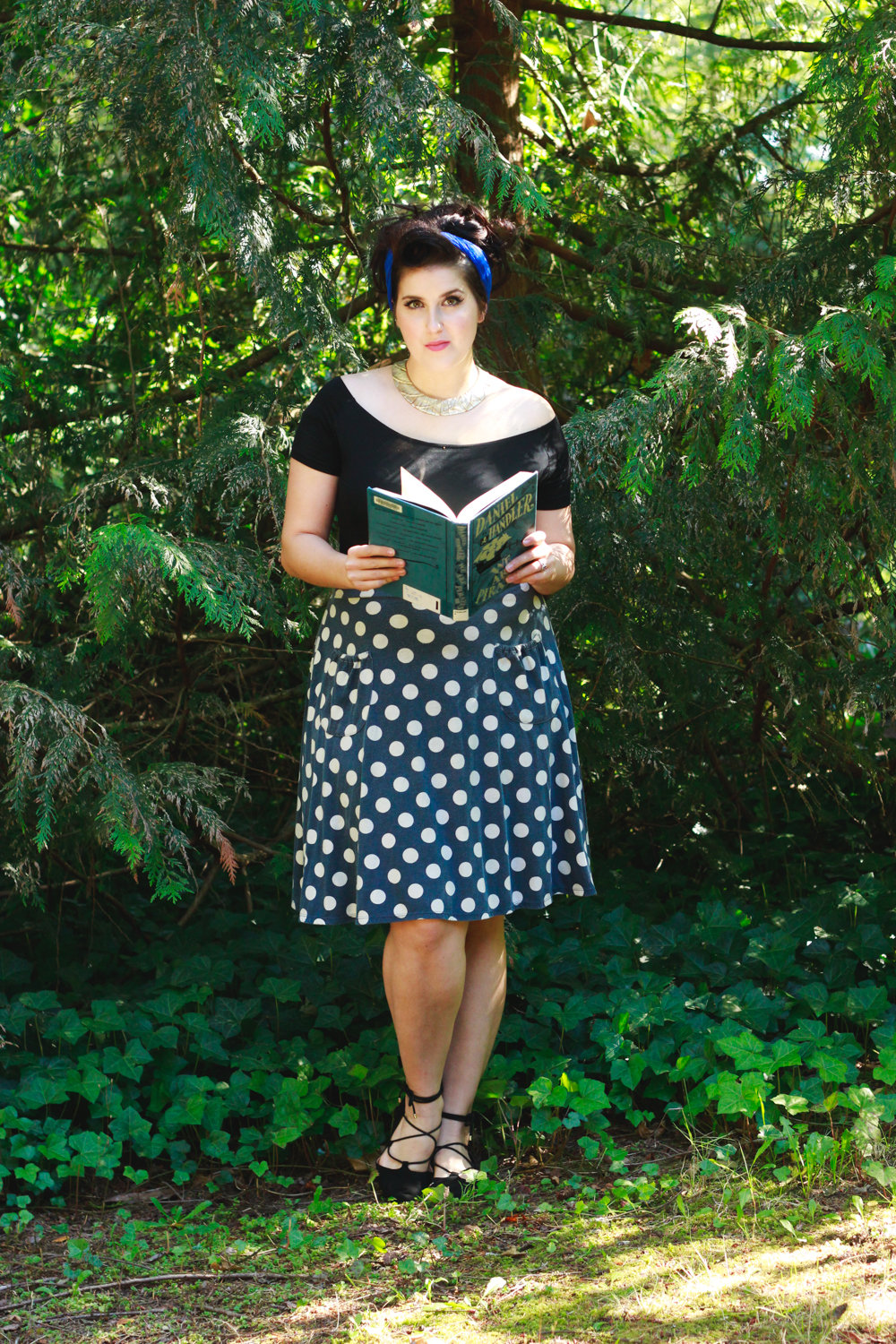 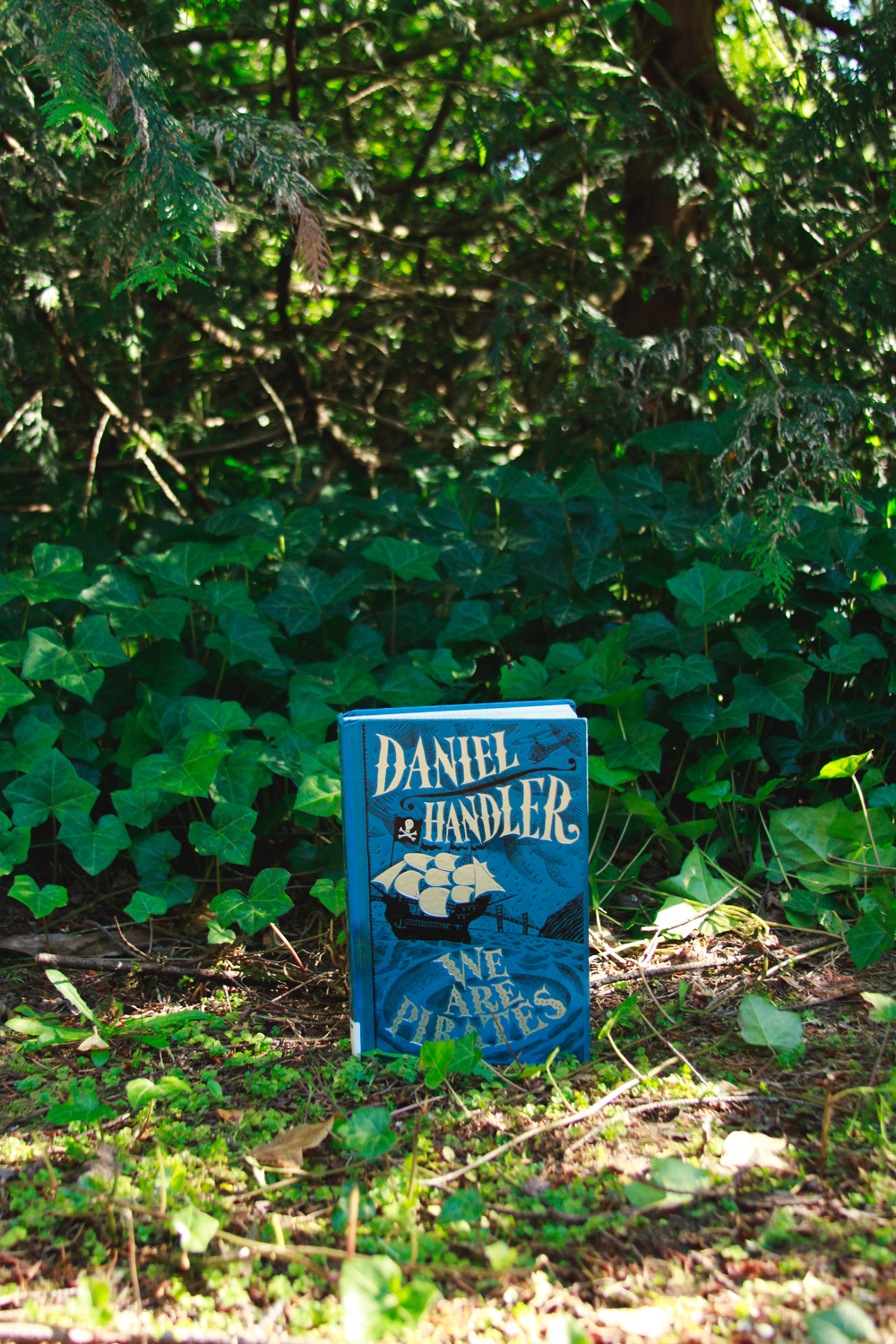 It’s that time of year, when we take family phot