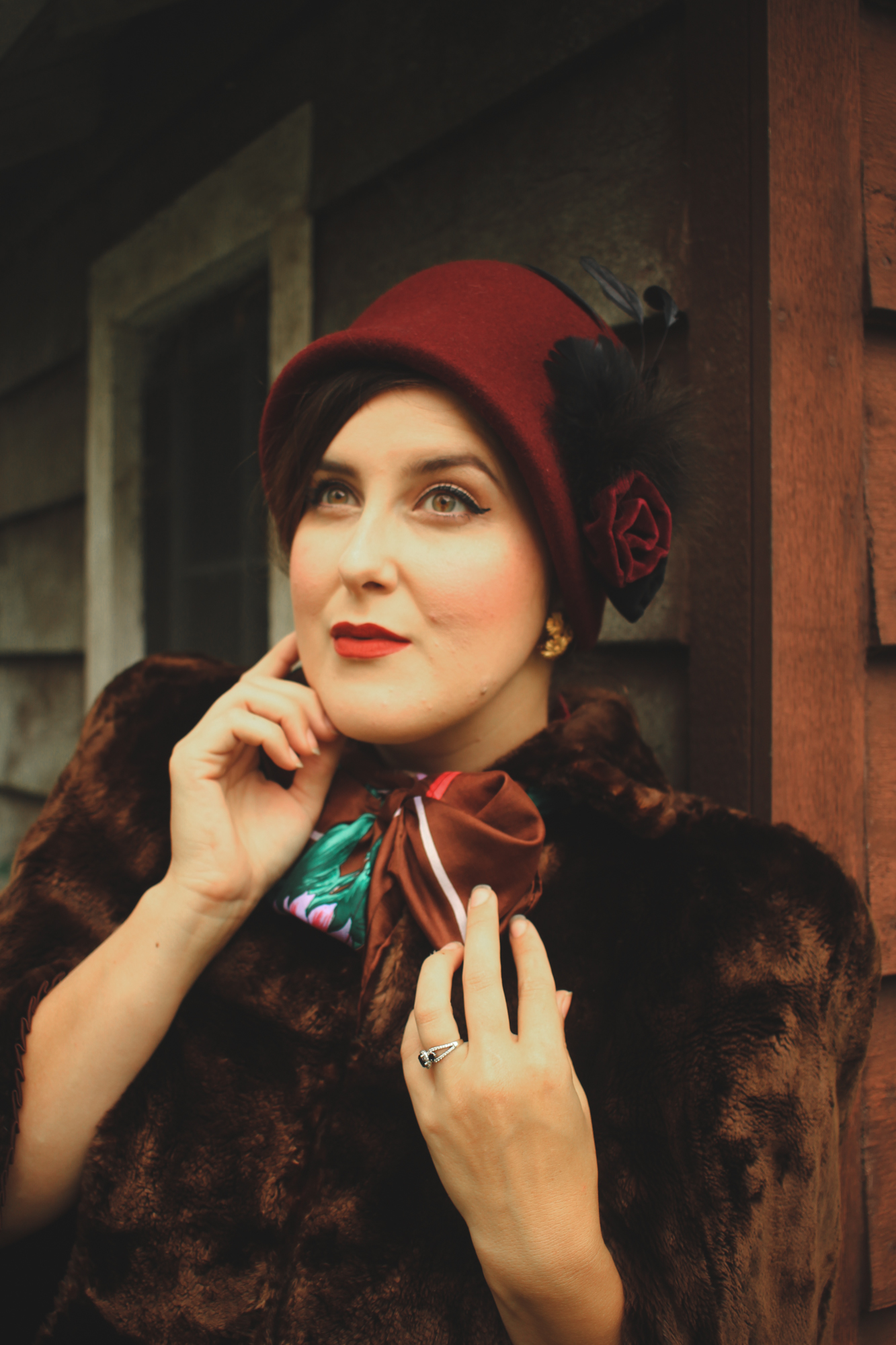 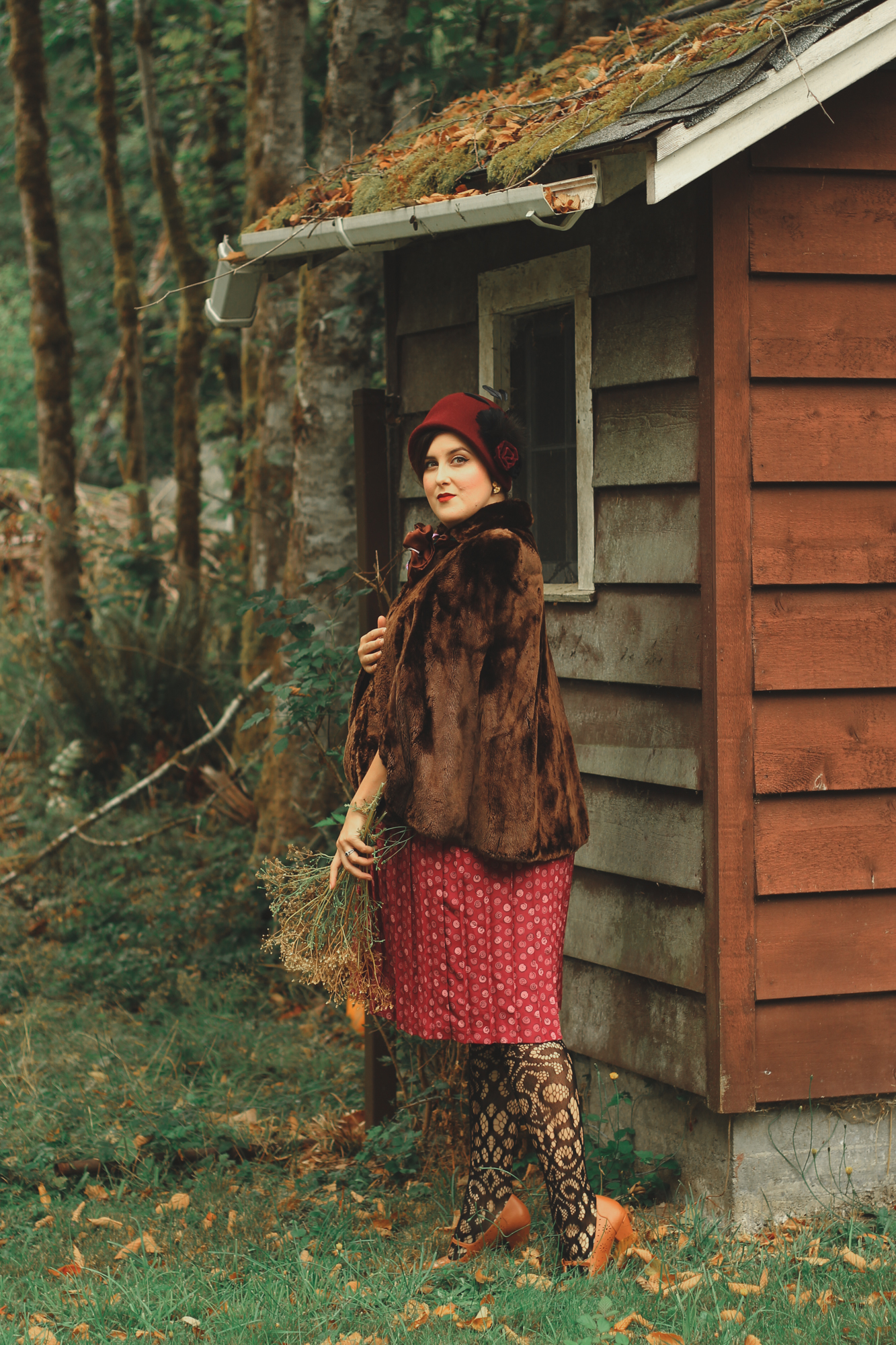 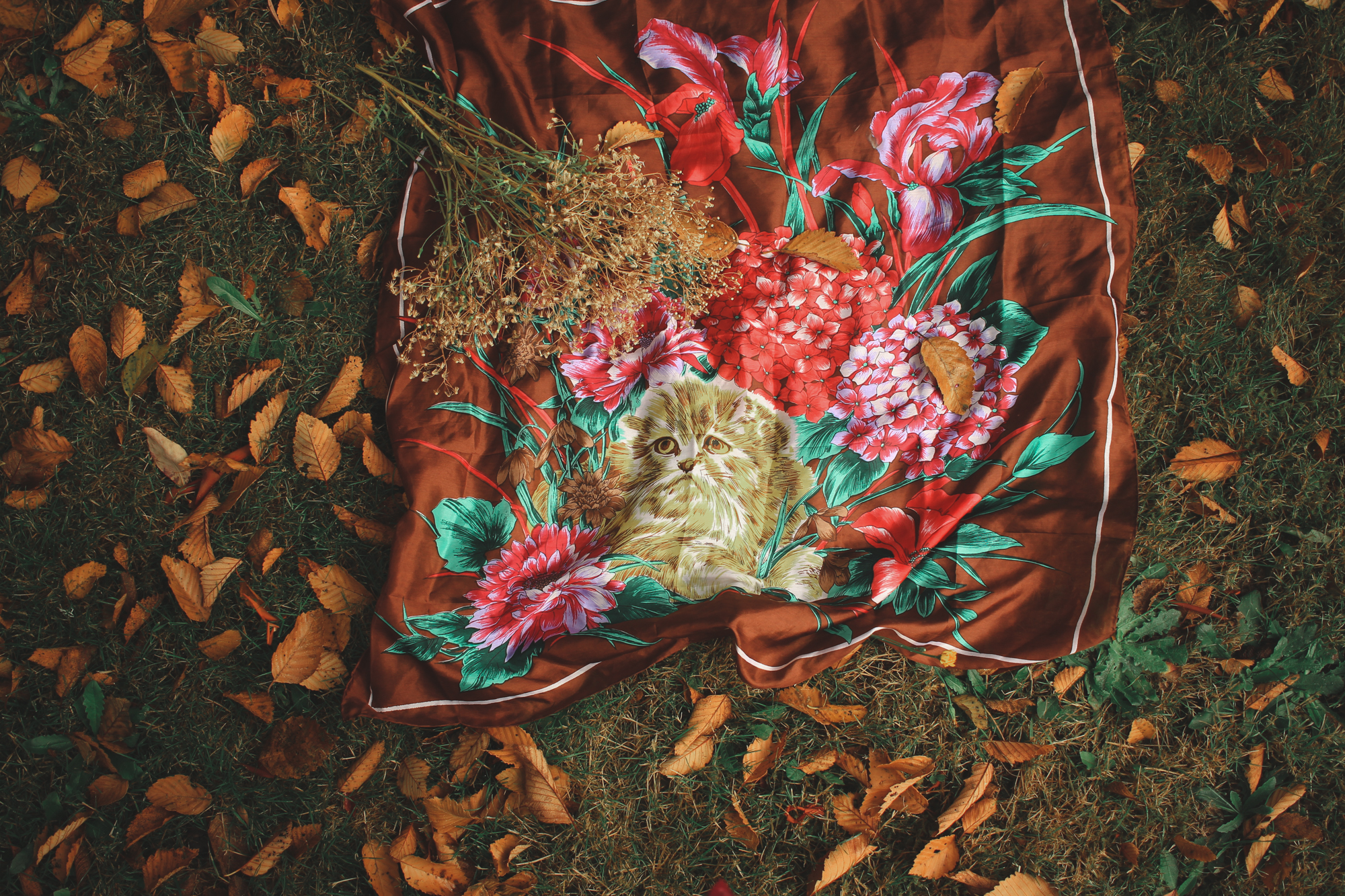 It’s the beginning of tights season for us, and one of my favorite ways to pattern-mix is choosing patterned stockings to compliment an outfit. Originally, I was going to style this dress from Donna London Vintage with solids and let the pattern shine on its own, but after trying a few different things I realized what I really wanted was to create a rich fall outfit with multiple patterns to enhance the pretty maroons and pinks of the dress. This outfit came together in an unexpected way – first by adding the hat with its black and blue feather, then the cape with its softness, then finally deciding I wanted some patterned tights.

The cat scarf was a last-minute grab, after thinking this outfit felt very 1920’s bohemian despite nothing actually being authentically from that era. The shape of the hat is right, and the extravagant fur cape is on point; the dress as a whole is the wrong shape but with the cape one can’t really tell – and I’m showing entirely too much leg for a 1920’s lady but that’s beside the point. 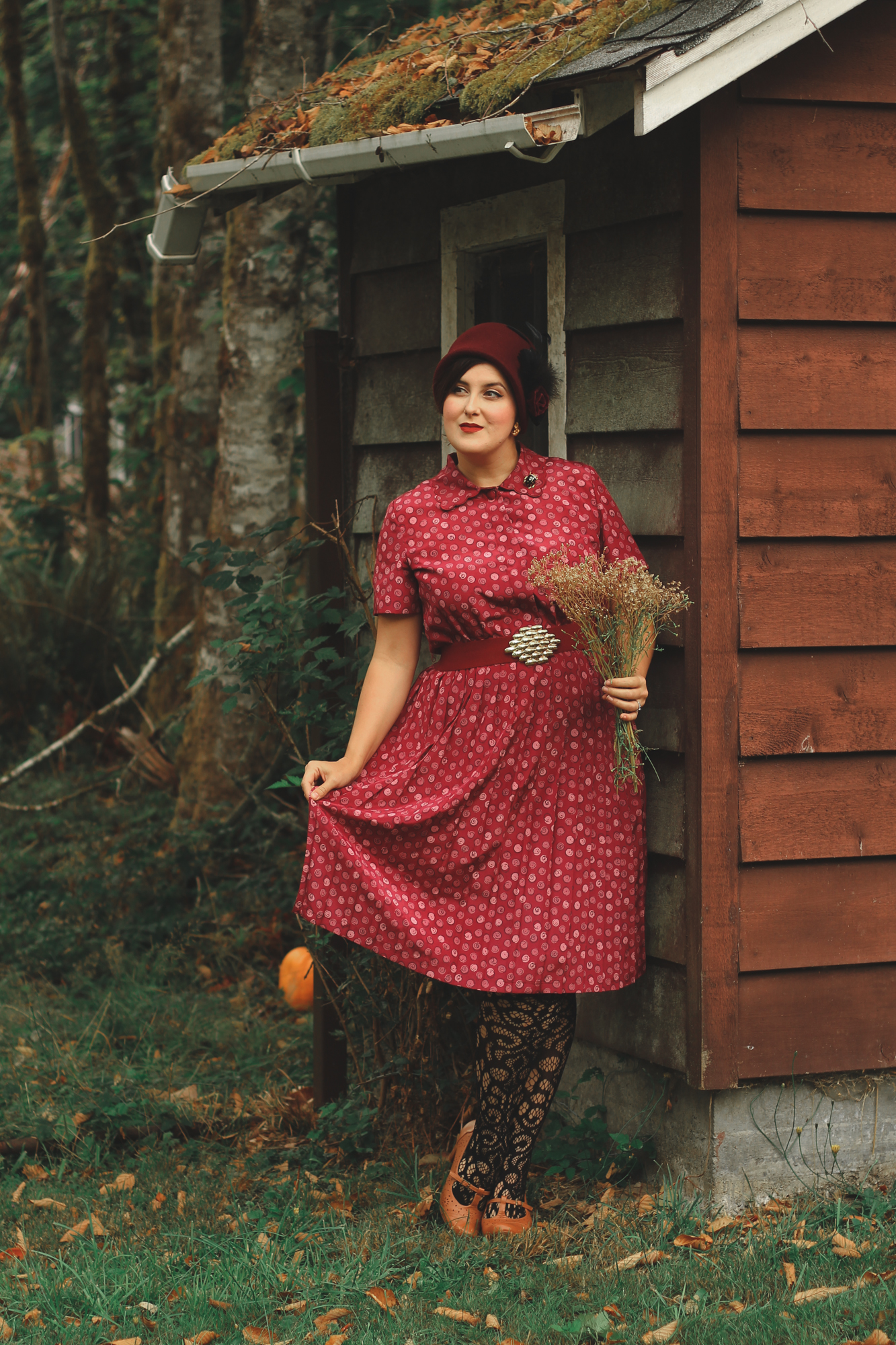 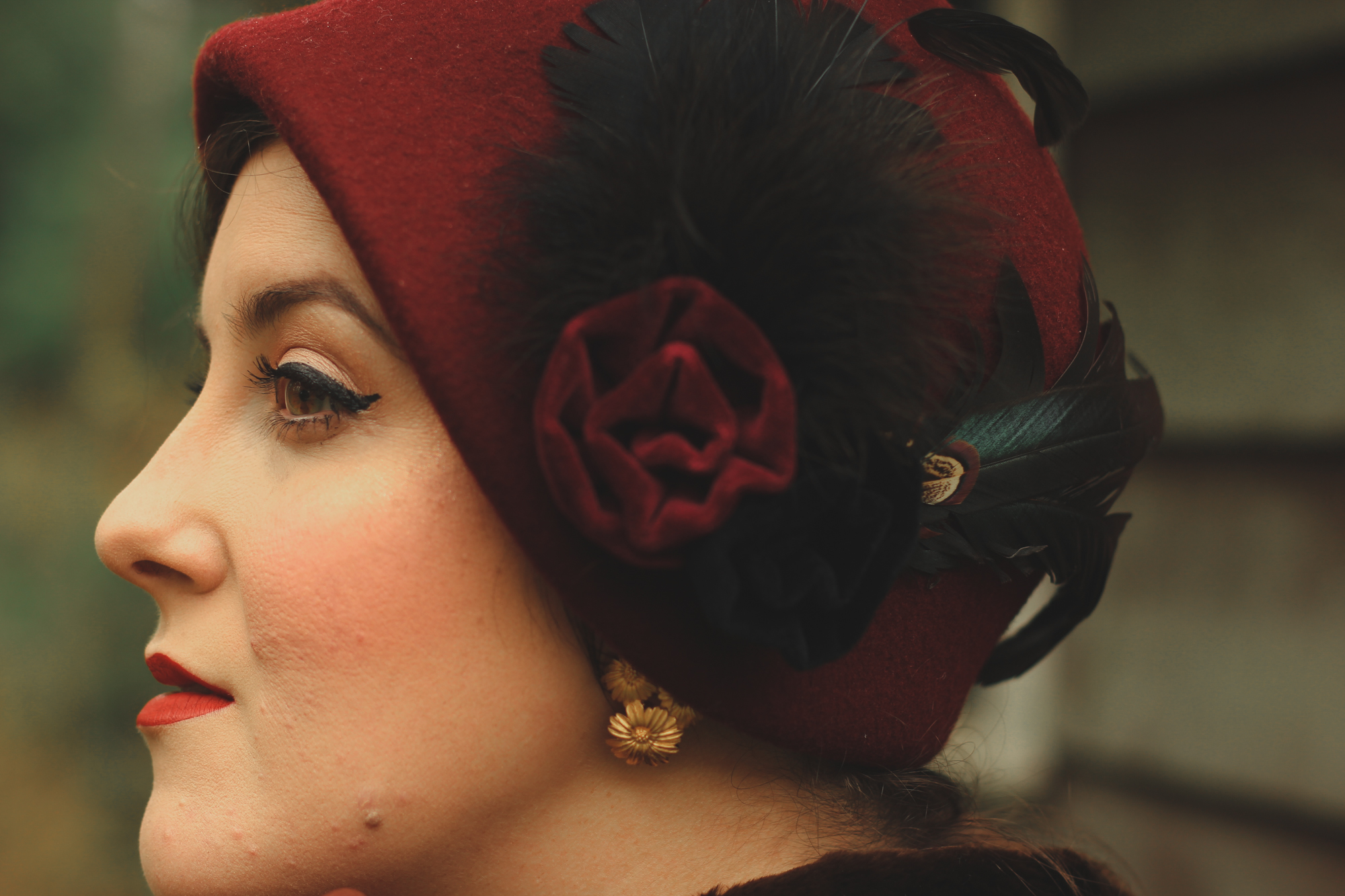 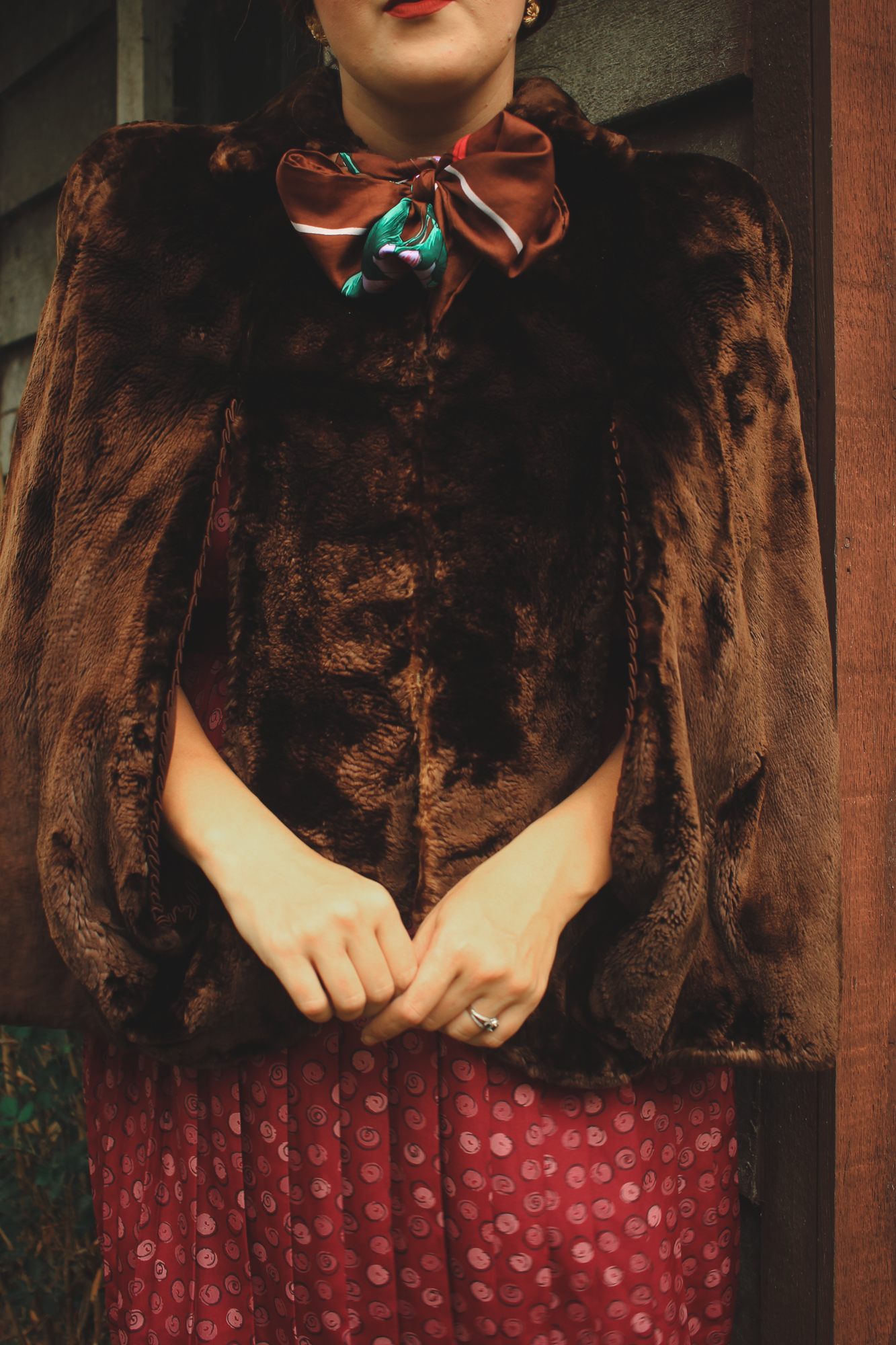 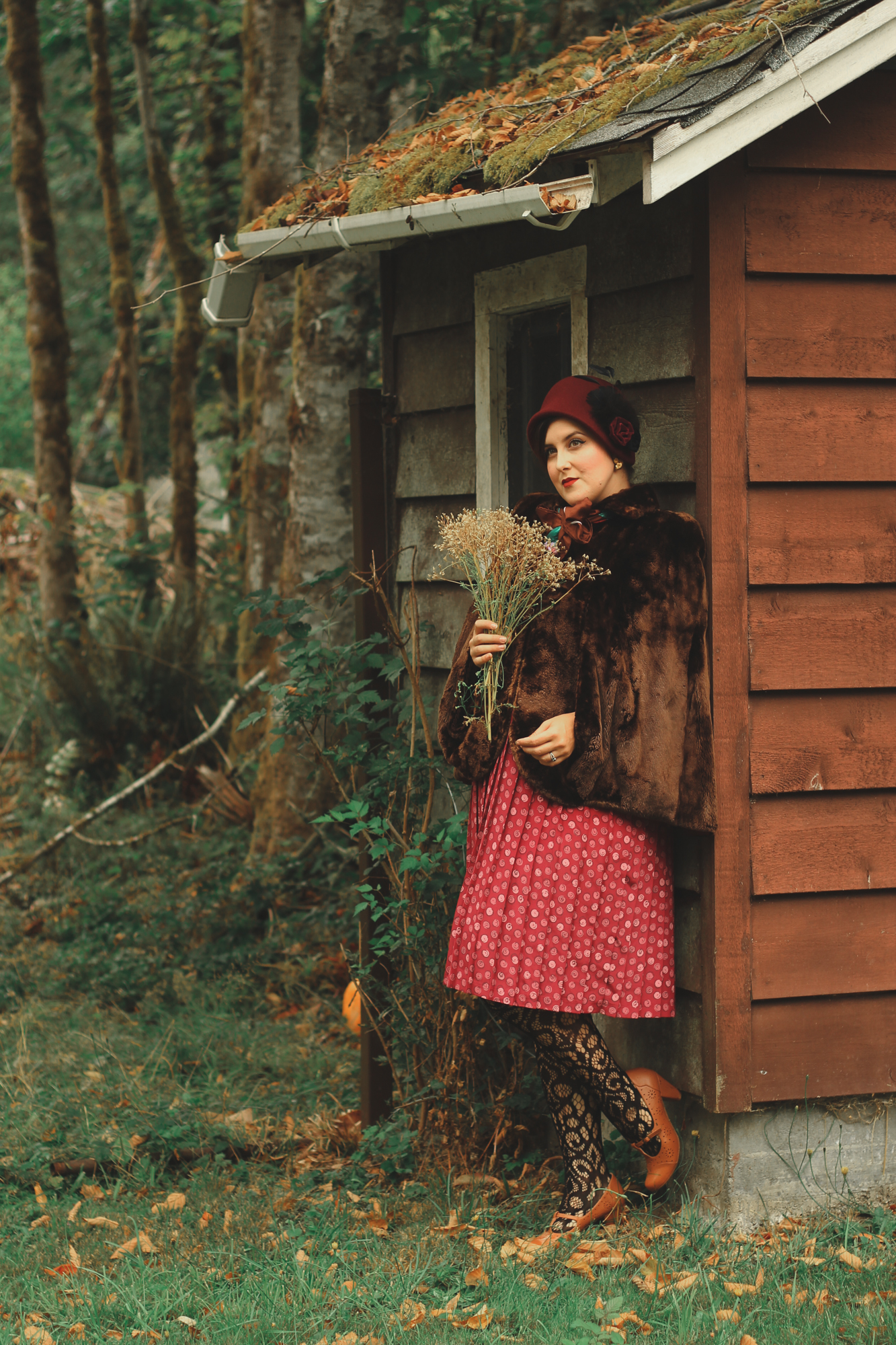 It’s this kind of blending of eras that I really love about fashion. I love taking a vintage dress from a vastly different era (this 1980’s DLV dress) and creating an entirely unexpected vibe out of it. I had friends saying I looked anything from 20’s to 40’s, because the separate pieces all hark some other era. The hat, shoes, and tights are modern; the dress and belt 80’s; the scarf 60’s, and the cape is 30’s or 40’s. All of these eras alone bring up strikingly different visuals when considered by themselves

But combined, it’s an outfit that’s vaguely reminiscent of a moment in time. As I was taking photos I imagined perhaps I was a traveler waiting for her family to arrive, or a curious soul exploring an abandoned space, or a girl waiting for her beau to appear. I haven’t felt this creative in an outfit for such a long time, and I fully credit this push to Donna London Vintage, for choosing things she thought I’d look good in that made me think outside of my self-imposed box. 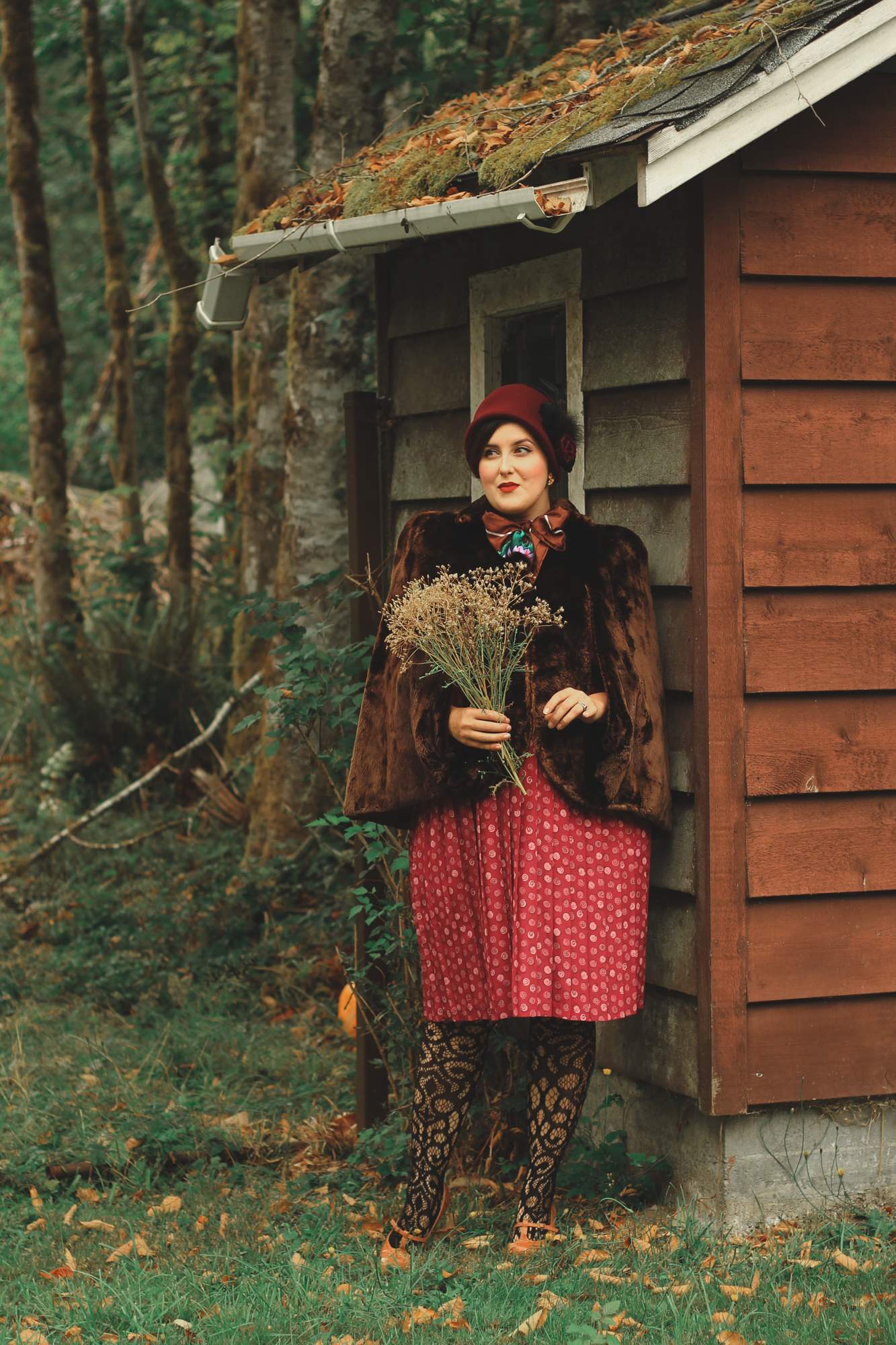 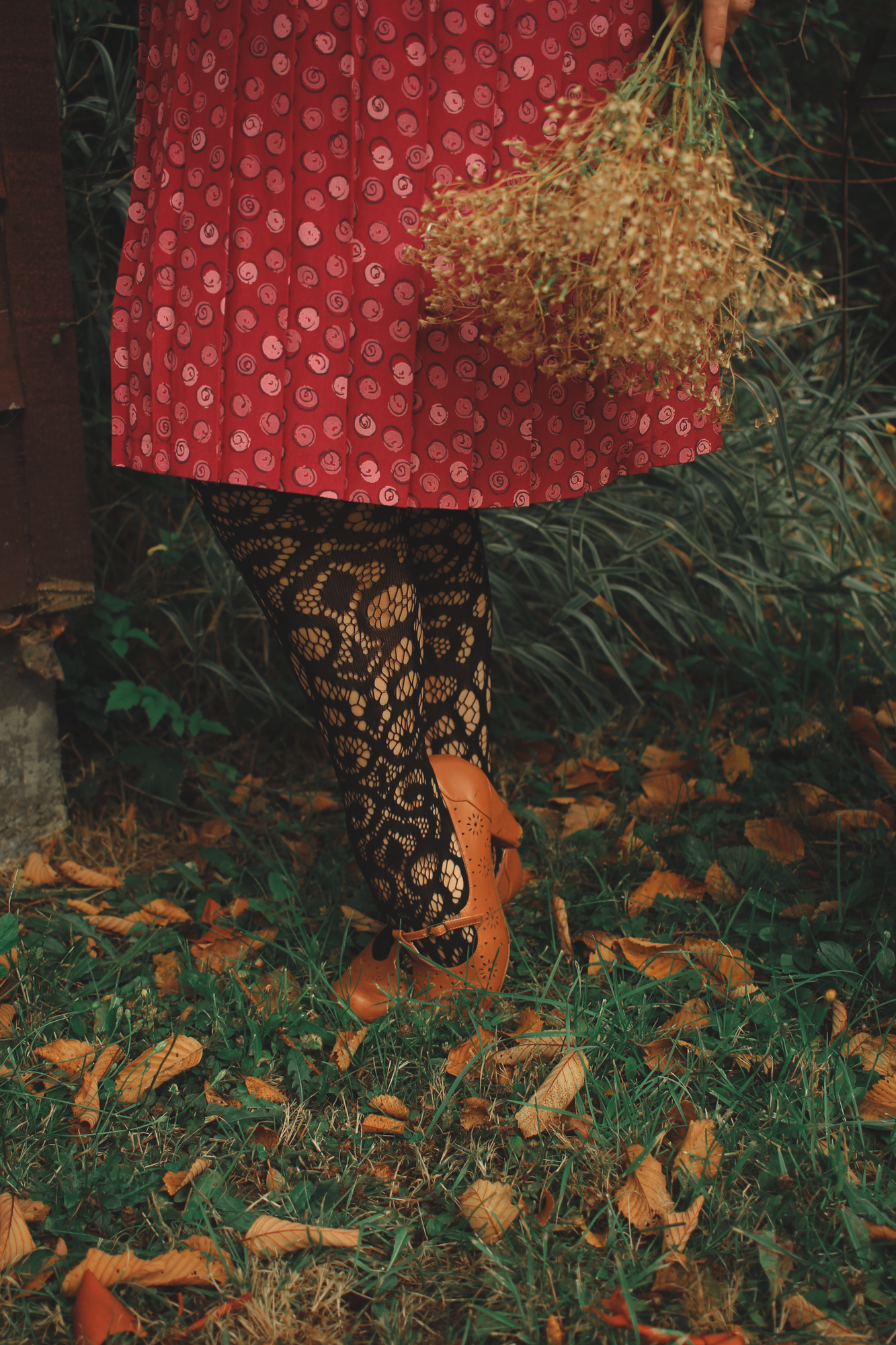 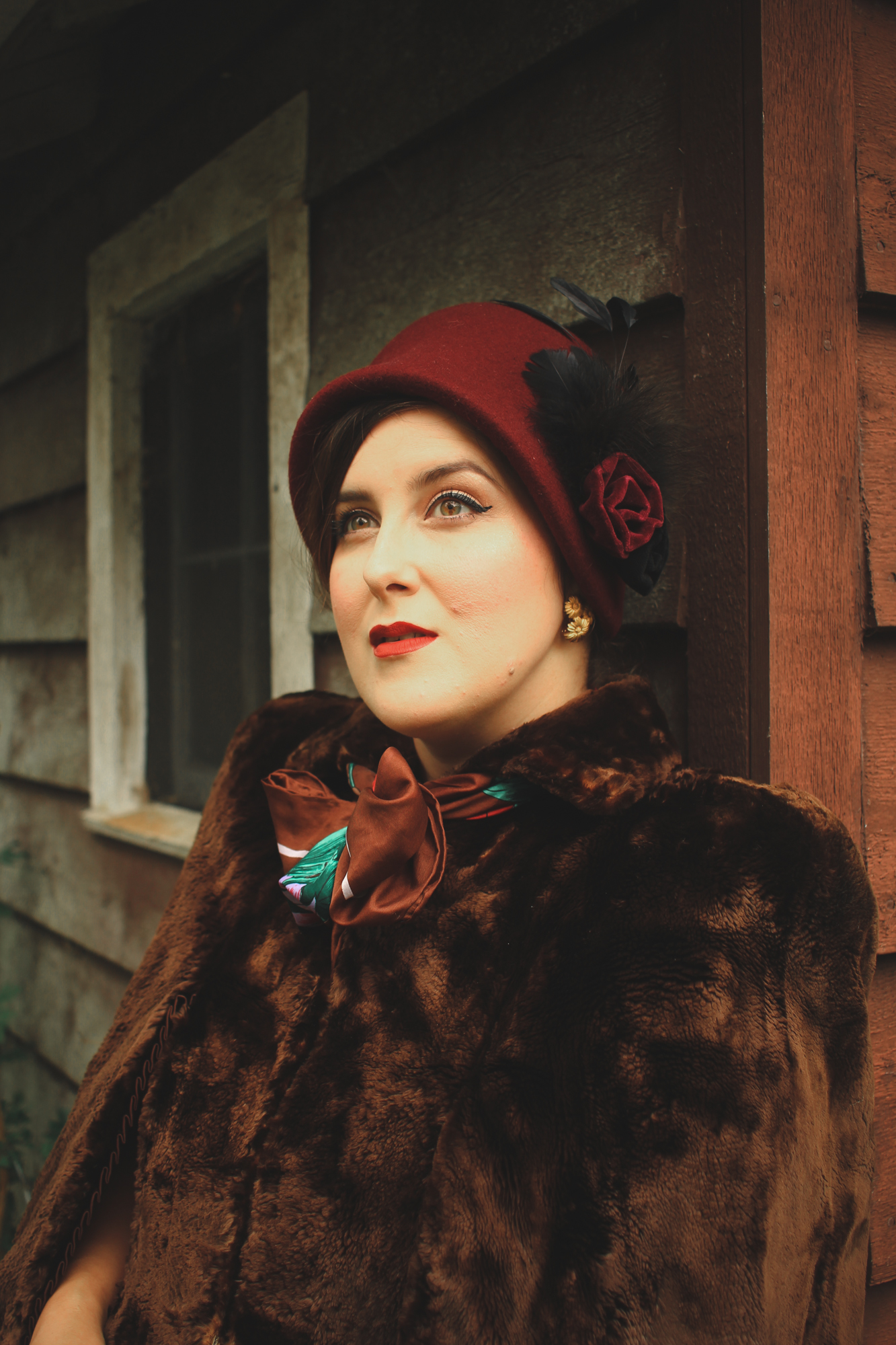 I think that’s what excites me about fall fashion in general; the opportunity to layer and mix and match is at its peak in the cooler months, when one won’t die of the heat that comes with many layers.

I can’t wait to share the lookbook video that I made to accompany each dress from Donna London – and to share one last look! Which, funny enough, seems to be everyone’s favorite though it was the one I had the hardest time styling. 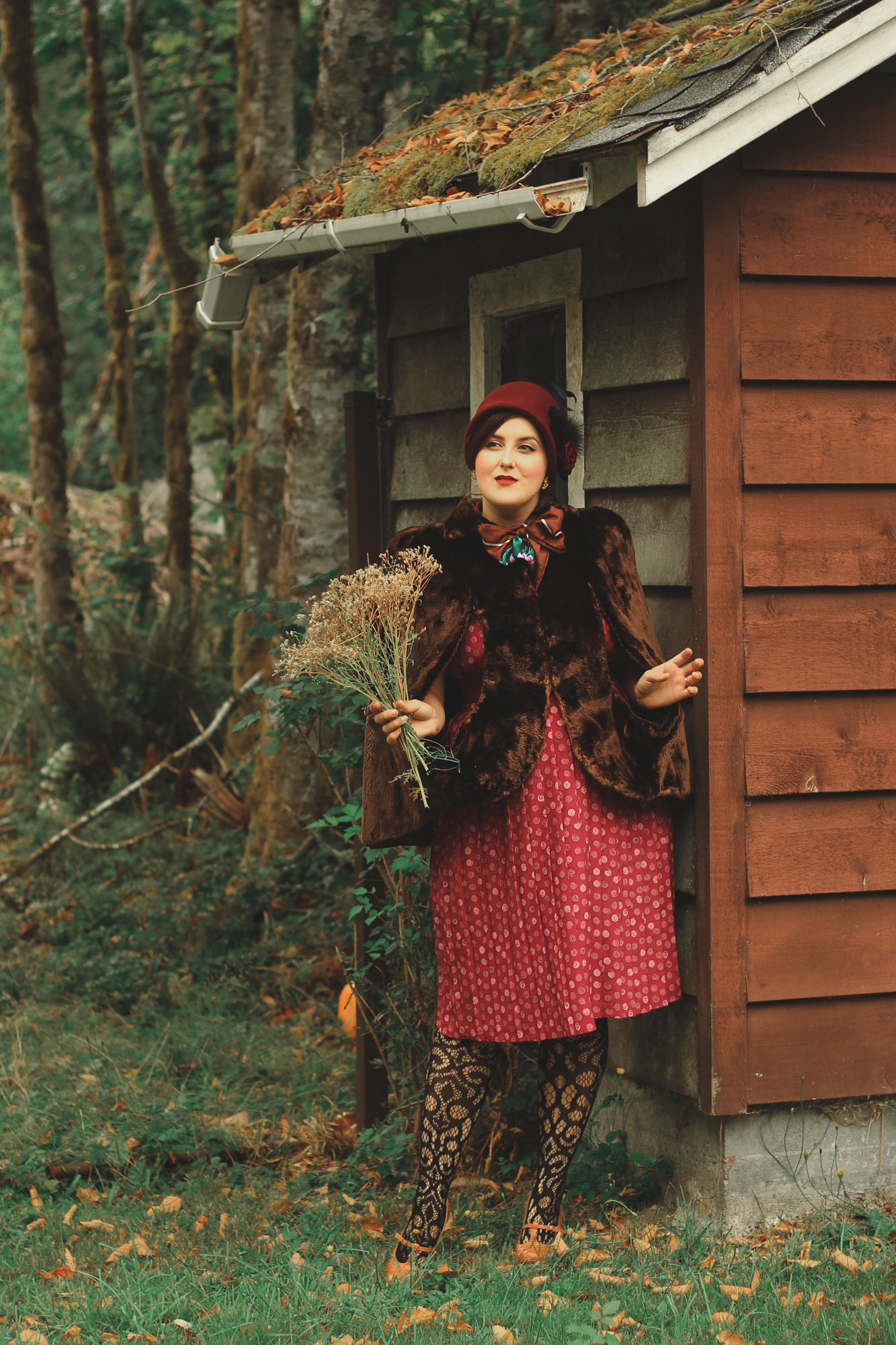 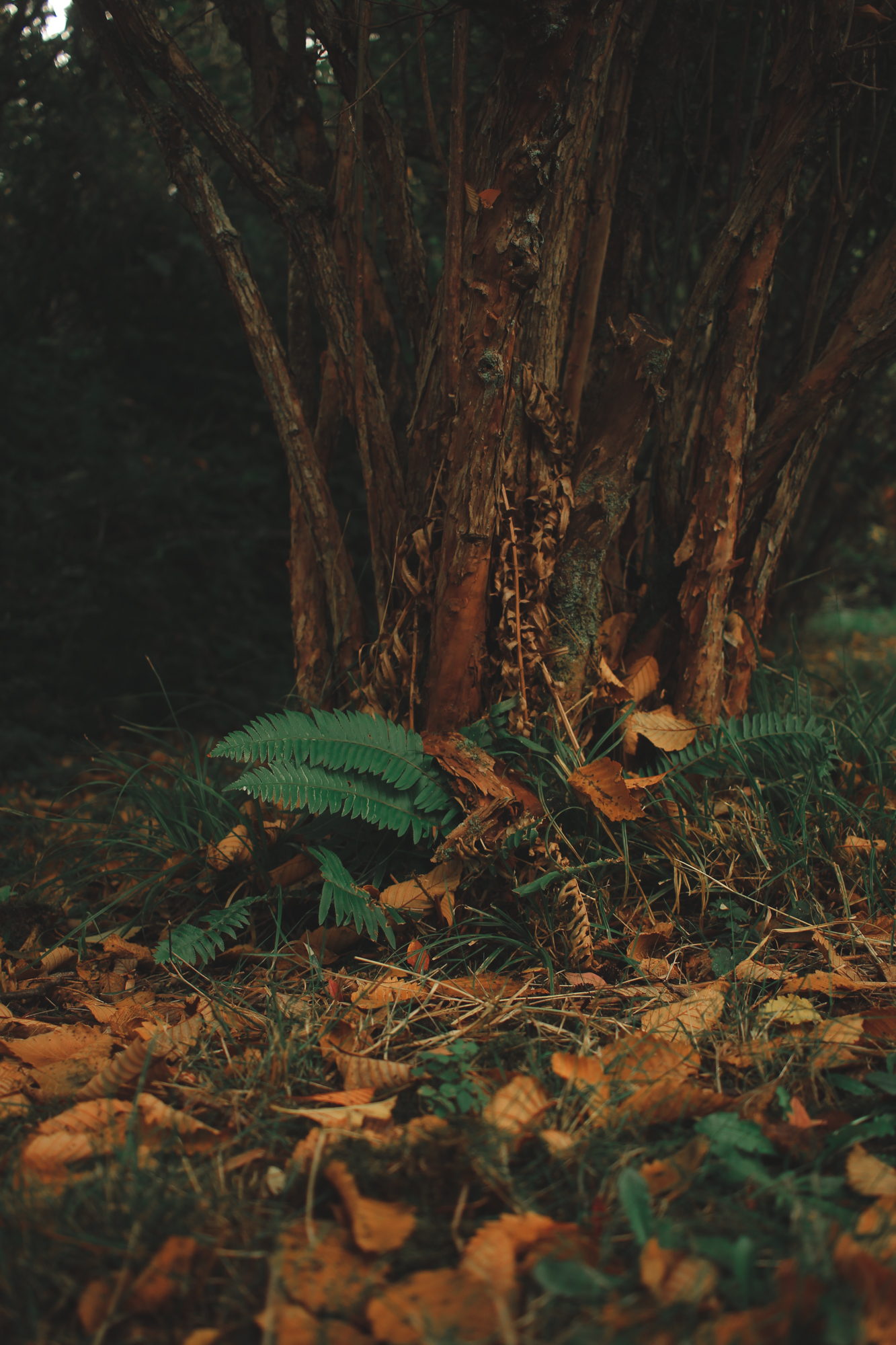 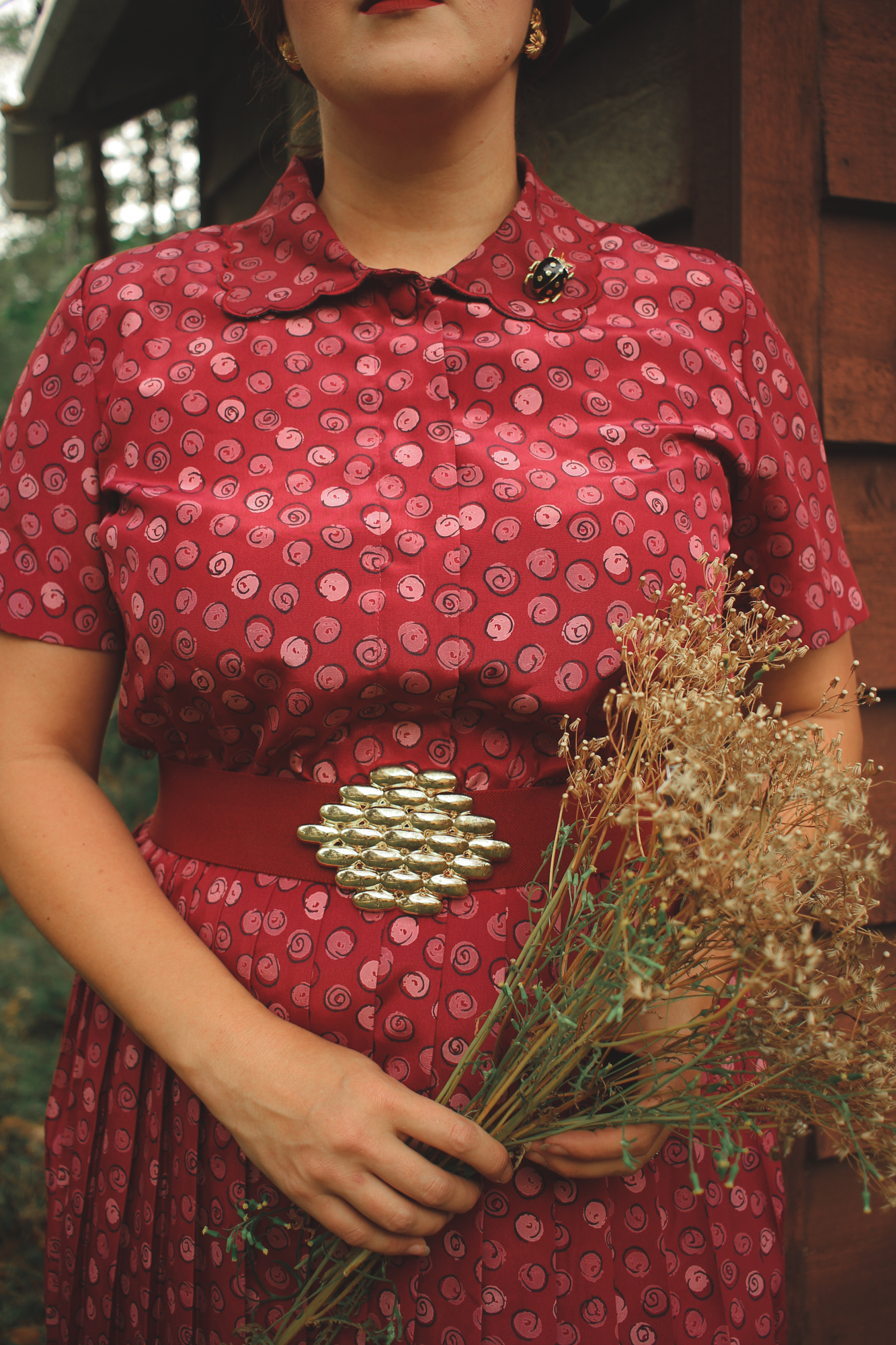 A little aside, I am wearing real fur in this post and it opened up an interesting discussion on Instagram when I posted. While I would never purchase new fur, I am all about rescuing and reviving old fur to ensure it doesn’t decay and go to waste. I hope to encourage others to search for vintage fur on Etsy or eBay or at thrift stores or even in Buy Nothing groups – where this came from! – to rescue and restore a piece of history rather than contributing to the waste of the new-fur industry. One eye-opening point I read while considering whether I wanted to wear vintage fur was that vegan furs and vegan leathers are made of plastic – something that will take ages to break down and will contribute to the plastics sent to landfills and microplastics in our water when they are washed. Natural vintage fur will decompose back to the earth, lasts for far longer, and will not fill our water with contaminants.

While I know I won’t change the minds of those who believe they are doing the best for the planet or living to their own convictions, I just wanted to throw it out there for those of you that like a fur look, or think you’d never be able to find real fur affordably – it’s possible! ALL of my vintage furs were gifted to me via Buy Nothing groups, given to me from friends’ grandmas, or thrifted for under $20. I’ve linked two similar capes off Etsy that are $50 or under.

I would highly encourage you to continue to rescue, reuse, and revive items that are vintage rather than buying new when you can! I am not perfect at this, and I don’t expect anyone else to be either, but a collective effort makes a difference and I know I’ve put ideas into the heads of those I know in real life to find secondhand furs rather than buying new, which I think is amazing!

And, as always, I would love to hear your thoughts on the subject – but please remember we are all people trying to do our best, and keep it friendly and respectful. 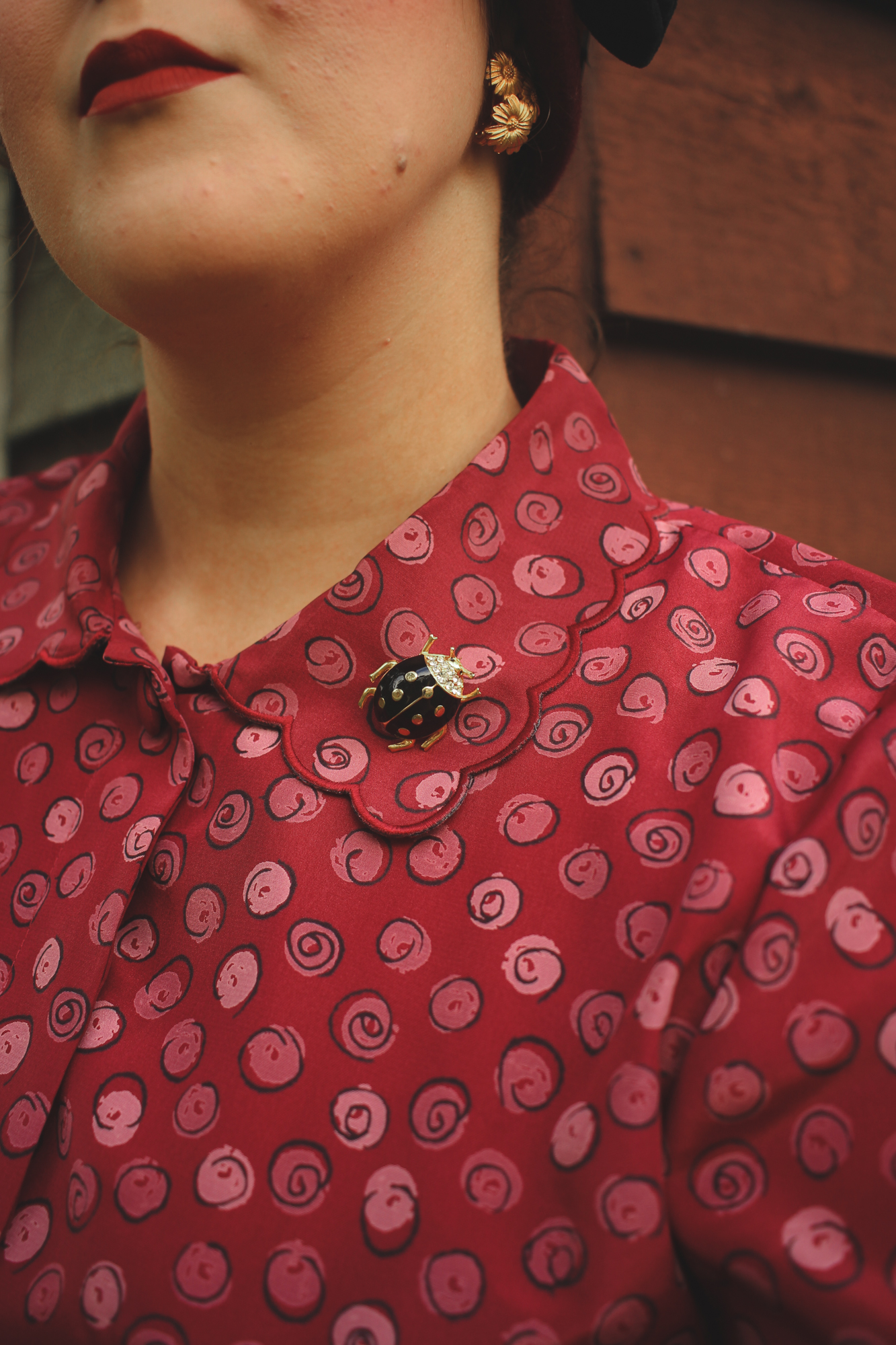 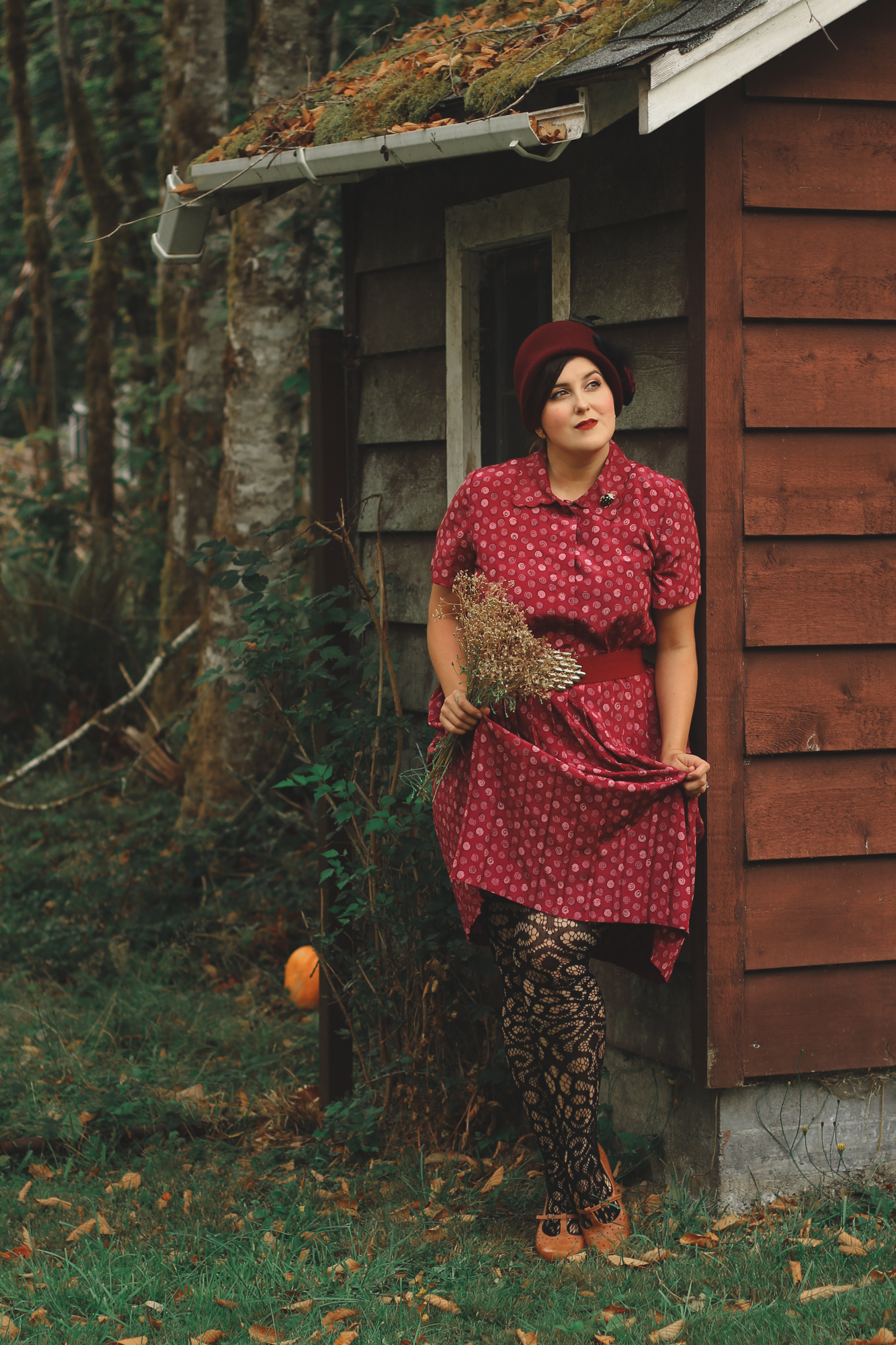